The Van Moppes brothers in Worcestershire

Lewis and Edmund Van Moppes were diamond merchants of Dutch ancestry who were relocated to Worcester and became Group and Area Commanders and the equivalent of Intelligence Officer in the Auxiliary Units. 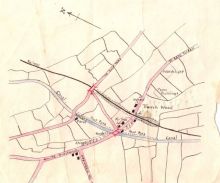 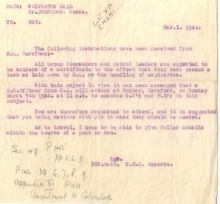 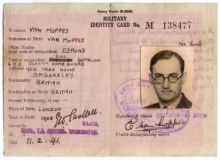 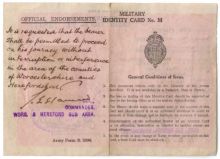 Group Leaders were appointed from the local Home Guard (approx 1941) and worked together with the Intelligence Officers to arrange Patrol training and later would arrange competitions between Patrols. The best Patrols were selected for finals that were held at Coleshill.

In 1944 a document was issued, possibly from Coleshill, that Army personnel in GHQ Auxiliary Units had to be reduced. This meant that Intelligence Officers were withdrawn but Group Leaders were to remain who would take over the control of Patrols until stand down later in the year.

There is some evidence that Thurston Holland-Martin from Overbury Court was given a senior position within the Worcestershire Auxiliary Units. He may have had an unofficial role as Group Leader as well as being the first Patrol Sergeant at Overbury.

Two diamond merchants (with Dutch ancestry), Lewis and Edmund Van Moppes, were appointed the roles of Group Leaders for Worcestershire Auxiliaries in approximately 1941. The brothers were members of the Home Guard and in 1941 were listed as Lieutenants in the 7th Worcestershire (Malvern) Battalion whose operational are included Ombersley, which is the area in which they resided at the time

The van Moppe brothers and their father were heavily involved in economic warfare with SIS. They were involved in an extraordinary scheme to rescue top quality industrial diamonds from Vichy France. The manager of their Swiss operation, Michel Picot, smuggled rough diamonds  into the factory from Switzerland and secretly exchanged them for the top quality diamonds - which were then smuggled back to London via Switzerland. The father of the van Moppes was then sent to Brazil to buy as many industrial diamonds as possible from South America. They were not involved with what became known as "Operation Amsterdam" in the 1959 film as has been suggested. This was one of their competitors J.K Smit.

After this successful mission, it was thought best that the brothers should be relocated as far away from the British coastline as possible. Their business was moved to Wolverton Hall in Lower Wolverton, near Peopleton. The West Midlands was also home to war materials manufactures which was also another factor in the van Moppe brothers moving to Worcestershire.

The brothers were provided with bodyguards who worked under the cover of general members of staff at the hall. The diamond processing was carried out in the house and many local people were employed to carry out the production work.

The brothers met Intelligence Officer Captain John Todd by chance in 1940. Edmund, the youngest brother, met Todd whilst playing Bridge in Droitwich and mentioned that he was wanting a more challenging role that that of his current one in the Home Guard. Todd suggested that they met on another occasion in the Raven Hotel in Droitwich, as he had a more suitable role for Edmund. They met as agreed and after signing the Official Secrets Act, the role of Group Leader was proposed to Edmund. After accepting this offer Edmund suggested that his brother Lewis would also be interested.

Wolverton Hall was made the HQ for Worcestershire Auxiliary Units. Training exercises were held here and Patrols would report for their instructions on a regular basis. It is said that a tunnel still exists at the hall, which leads to cellars into the garden - a good way of escape in the event of an invasion!

Roger Smith from Commandary Farm was the first Patrol Sergeant of the Auxiliaries and was promoted to Second Lieutenant in 1943. He became Group Leader for Broadheath, Claines and Crowle Patrols. At this time Lewis Van Moppes became Captain (the equivalent of Intelligence Officer for Worcesterhsire) and Edmund became a full Lieutenant and Group Commander. He would look after Alfrick, Lenches and Overbury Patrols.

Quarter Master Sargent Thomas Dawe who lived at Wolverton Hall was appointed who would assist the van Moppes and Roger Smith. His also looked after the Van Moppes accounts.

The documents above and below were found by Michael J. Russell whilst tidying up for a deceased friend who was something of a military enthusiast. These include van Moppes military ID, certificates indicating he was an explosives specialist, a volume of Military Engineering-Demolitions 1942, a detailed hand drawn map of an area near Droitwich with railway and canal bridges marked, presumably for possible demolition. And one or two other documents from very senior military personnel giving him authority to move unimpeded and to use E Petrol coupons. Edmund died in 1988 and his son Nicolas was killed in an aircrash in 1979 aged 42.