The Garth is a private property and not open to the public.

At the beginning of the War the owners of The Garth, the Gowen family, decided to leave for the safety of Scotland and arranged for Harry Sexton to move into The Garth with his family so that they could take care of the property whilst they were away. Intelligence Officer Captain Peter Fleming, and his chosen men then moved into the house. The family initially moved to one end whilst the army took the rest. This did not last to long before the family moved out completely and the Army took the whole house and surrounding buildings.

To begin with Peter brought in his brother Major Richard Fleming who brought with him the Lovat Scouts who he commanded. It was these men who were in the patrols whilst everything was being set up. Alongside the Lovat Scouts, Peter brought in elements of the Royal West Kents and the Buffs to help him train men and act as taxis for men coming to train at the Garth.

'The Garth appears originally to have been a cottage which was enlarged about a century ago. In the older wing the first floor had removed-floorboards, joists and beams-and the roof rafters exposed; the exceptional height and the two rows of leaded windows gave the look of a slightly impoverished and very old chapel. Everyone who entered it felt that the inglenook fireplace might have sheltered an alter, and the wooden packing cases full of explosives that Fleming and his men used as tables and chairs could have been pews'

'The older part had the upper floor removed and was known to Calvert as 'the Barn'. It was soon stacked to the ceiling with explosives in crates, and whatever weaponry Fleming could muster. This was not an inconsiderable amount and, as the office and dining areas were in the Barn too, a certain understanding was necessary among personnel. The only lighting was candle power and this flammable correlation with crates of explosives sometimes led to firmly articulated protests from uninitiated visitors. Cigarette smoking was discouraged.'

Quote from The Last Ditch by David Lampe.

Front of the building - The white door is what would have been the front door during the war. If you go through it and turn right it leads into the Hall. If you turn left it leads into Norman Field's office.

Entrance - Entry was made for Auxiliers through the arched door. This led into the lecture hall and the area they collected their weapons.

The Main Hall - Lectures were given in this hall. Peter Fleming used to throw fuses with detonators into the fireplace to show the men in the lectures.

On arrival at The Garth, Norman Field was surprised to find a Luftwaffe pilot who had just been shot down lying on the kitchen table! He had arrived by parachute, wounded in the arm and not in a very good state covered in yellow dye. It had burst over his head! They turned on the one o'clock news and someone said "listen carefully! you'll hear the truth!" He probably didn't speak a word of English as he didn't respond anyway! The ambulance turned up and took him off. The table was cleaned up and lunch produced for the assembled company at the same table!

Nissen Hut - It is a little bit hard to see but if you look close enough you can see the remains of the Nissen hut Norman Field had built for men to sleep in. Apparently there was another one further into the wood.

Stores Tunnel - Here is the remains of the Tunnel Norman Field had constructed for storing explosives as he was leaving. From talking to some locals they said it ended up being used to store food.

Path into the wood - The path that runs next to the Garth up into the wood used to be where machine gun training took place where men would walk up the path and targets would pop out from behind trees. They were operated by men hiding near by who pulled on a string to pop the target out.

A man, who was a child during the war, used to go up this path with his friends once the Auxiliers had stopped shooting. They would dig the bullets out of the trees and the ground to use in their catapults!

Not long after setting up it was decided to bring in local men of Kent to form the patrols. Lectures were done in the main hall in the old part of the building. Auxiliers have spoken of Peter showing them detonators and how dangerous they could be if mishandled by setting them off in the fireplace in the hall this caused quite a few men to jump! One Auxilier remembered seeing Peter wondering round the Garth smoking his pipe with detonators in his shirt pocket he then pulled one out to show a man and was treating it like it was no more dangerous than a twig! In November 1940 Peter was pulled away from the Auxiliary Units to move on to other important work. On leaving, he took the main bulk of the Lovat scouts and his brother leaving two Lovat Scouts behind to help train the men of the Patrols.

It was at this point Royal Fusiliers Captain Norman Field was brought in to take over from Peter as Intelligence Officer for Kent. There was a two week period where Peter handed over control to Norman before he departed. Norman remembered:

“On arrival at The Garth there was a live German airman on the only table. He had been wounded in the arm and looked very yellow as a bag of stain, supplied for sea landings, had burst over his head when he parachuted into a tree in Kings Wood. Peter Fleming came in from a day of bridge mining (without consultation) using gun cotton and milk churns. He ensured we had top priority for anything we wanted, especially explosives. The following day I was present at one of the training sessions and I realised there was much to learn during the week before Peter left. Almost his last words to me were: ‘You will find this job intriguing but demanding. You will find the Corps Commander takes a close interest in our progress so I suggest that when you wish to take some leave you give him a call – out of courtesy’. “Fleming was a very agreeable man."

Lectures were soon moved from the main house to the outbuildings and the surrounding hillsides were used for all sorts of training exercises from firing practice to grenade throwing to practicing with explosives. In one night exercise at the Garth Norman Field and another man were trying to plant a detonator stuck into a potato (stand in for real explosives) on a target, it was raining so they retreated into a barn. Whilst standing there chatting, the potato exploded blowing some of his fingers clean off! Norman quickly had the man in a car and rushed him to the hospital in Canterbury to be treated!

In another rather hairy event Norman was up on the hillside behind the house showing soldiers a few detonators. He flung one into a hole in the ground which went off and very unexpectedly set fire to the scrub land which ran up the hill to the explosives dump in Kings’ Wood! He managed to get a group of Canadian soldiers, that had stopped in the field opposite the house to camp, to help put the fire out. The main thing he remembered about this experience was whilst he and the regulars with him were running around panicking about blowing the explosives dump up the Canadians causally strolled up the hill and put the fire out with ease then just as casually returned to their camp as if they had been out for a stroll!

One day Norman was in his Office at The Garth when he received a phone call from his group leader in Faversham, Captain Thomas Neame, that a German Bomber had come down in a wood near where one of the O.B's was. He set off to see what was going on and when he got there he found a strange scene.... Not only were the dead German aircrew lined up on the floor but some funny chap had also lined up next to the dead Germans all the animals and birds killed when the plane crashed! After witnessing this bizarre scene he and his men went about removing some explosives they found in the cockpit area of the plane and returned to The Garth.

With the explosives from the bomber, and their own supply, they put on a demonstration in a field behind The Garth where they blew up a car! It didn't go according to plan though. Everyone was positioned a safe distance from the car for the event and when they finally blew it up they hadn't realized how powerful the explosives were. Norman remembers seeing pieces of car flying clean over the spectators heads and into nearby woodland. Needless to say everyone was a bit shaken by the whole event and Norman was very concerned because at that time every day a chap walked his dogs through a part of the wood wreckage fell in. Luckily on this day the chap had decided not to take his dog for a walk at that time!

Auxilier George Elvy of Snargate Patrol remembered one very eventful day whilst training at The Garth. His Patrol and one of the other Patrols from Romney Marsh were up at the hand grenade pits practicing with live grenades. It came to a man from the other patrol to have a go at throwing. He went into the pit and was given a grenade to throw by the regular overseeing the exercise. What happened next made men run in all directions to find cover as quickly as humanly possible. The man pulled the pin from the grenade primed it to throw then turned around holding pin and fly leaver in one hand and grenade in the other and asked the regular which bit he was supposed to throw! Luckily for him, and everyone else, the fuse had not been shortened to three seconds and the regular grabbed the grenade and throw it onto the range! It was very lucky nobody was hurt.

Norman left the Auxiliary units in 1941 and a London Scottish Captain George McNicholl took over as Intelligence Officer in Command of Kent till the Units stand down in October 1944.

A couple of Regular soldiers were left to destroy and clear the house out of any sign of military occupation.

It’s worth noting that there were rumours for years about the Garth being mined with a milk churn full of explosives, to be set off, and the building destroyed if the Germans ever did invade. When the house was renovated these seems to be true as under the floor a concrete cap the shape of a toilet lid was found covering a milk churn sized hole! 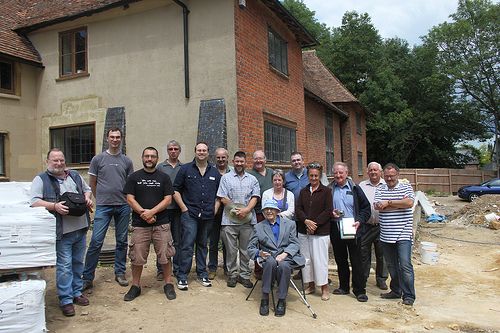 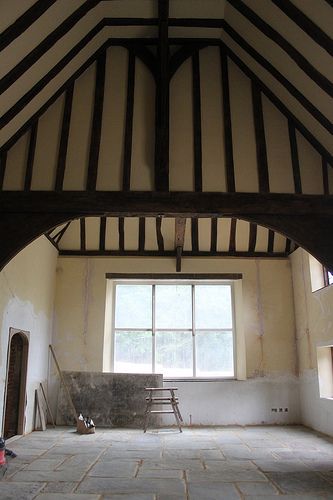 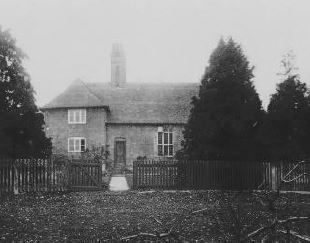 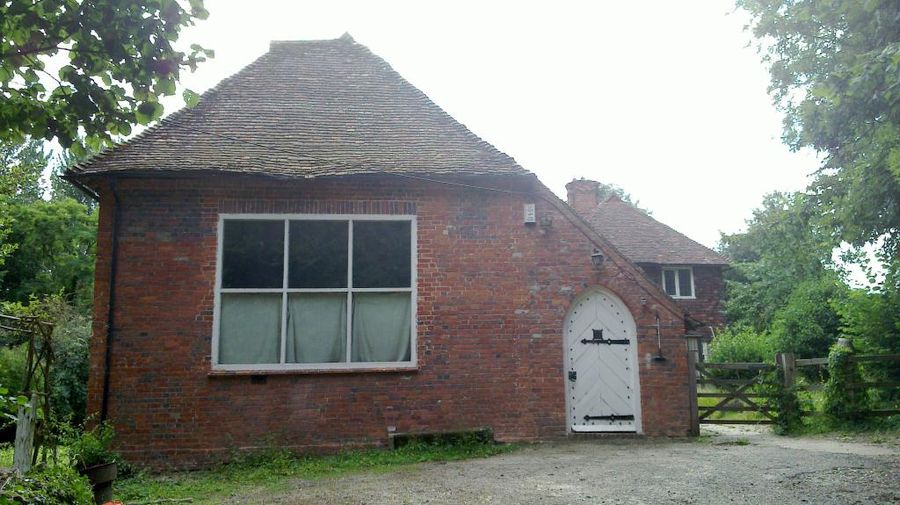 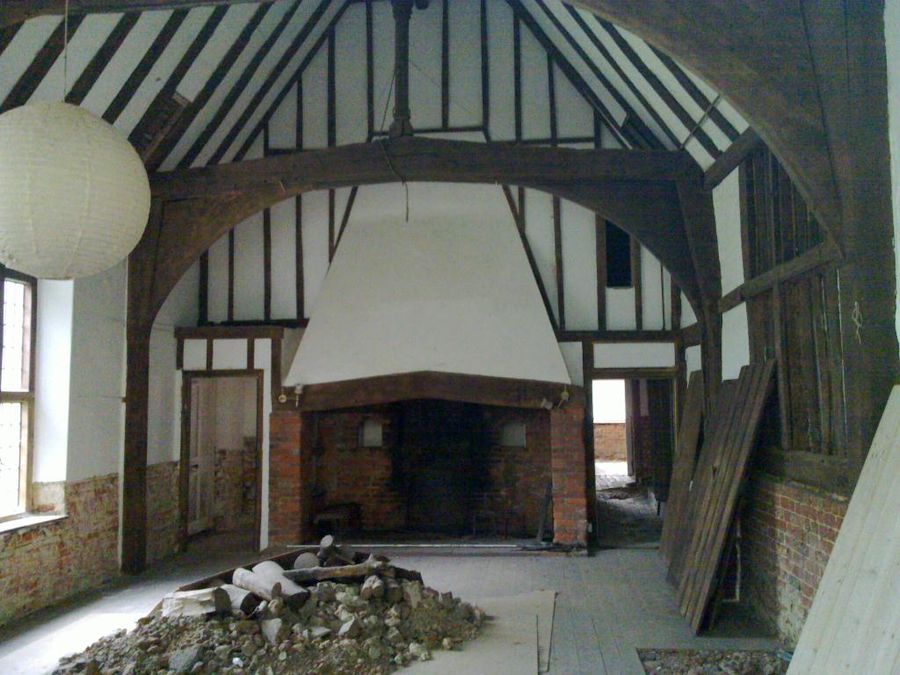 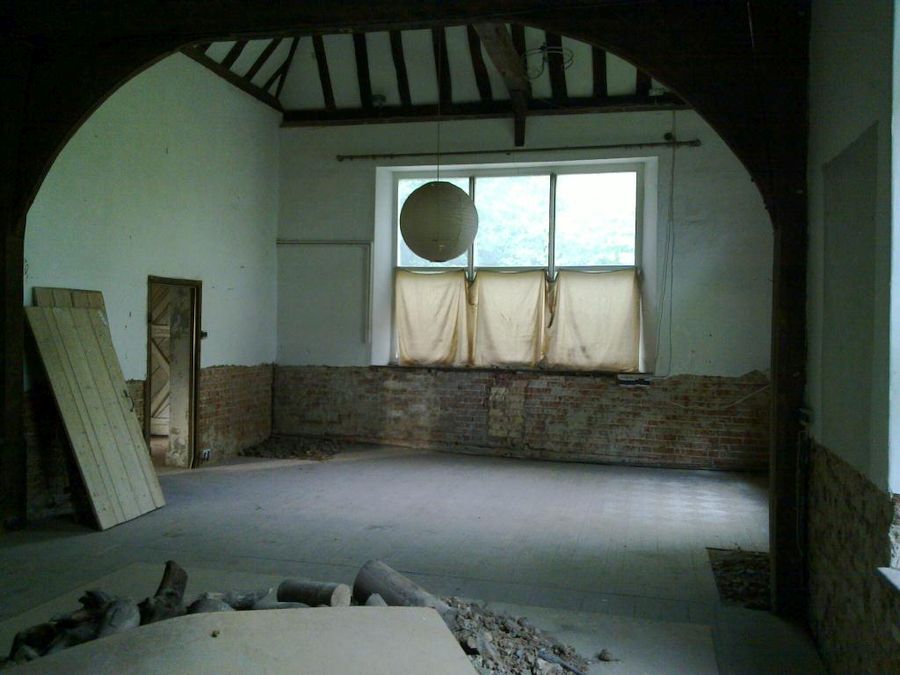 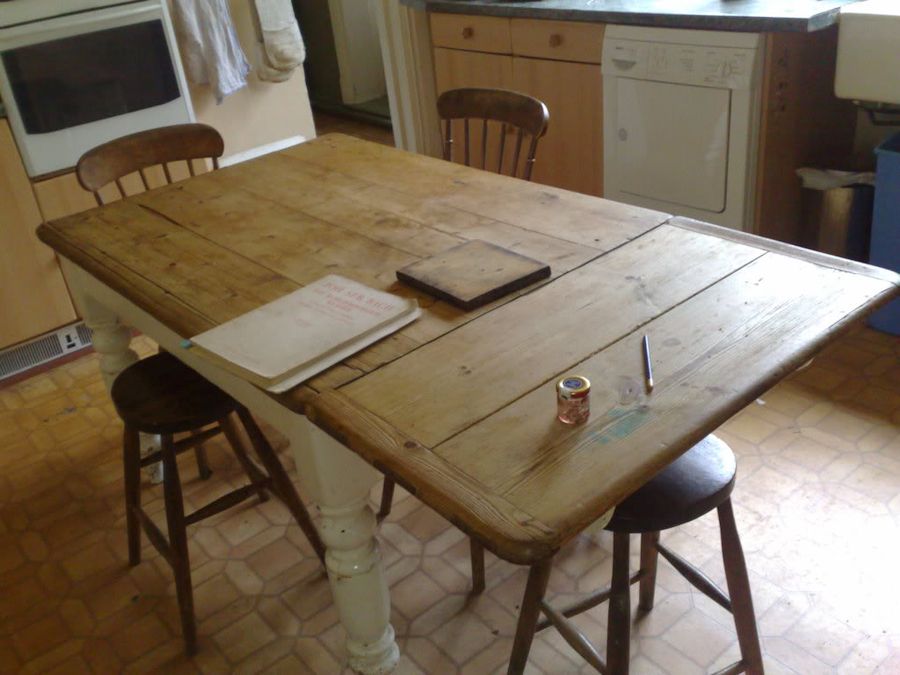 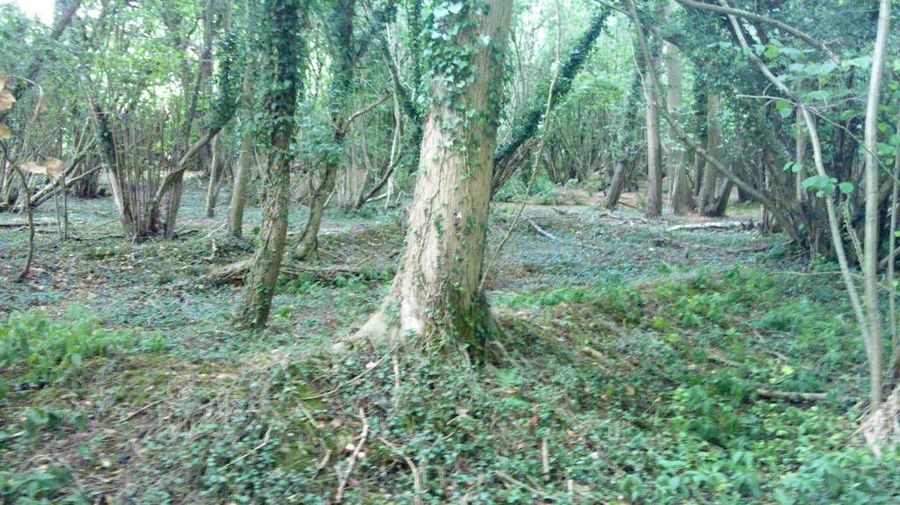 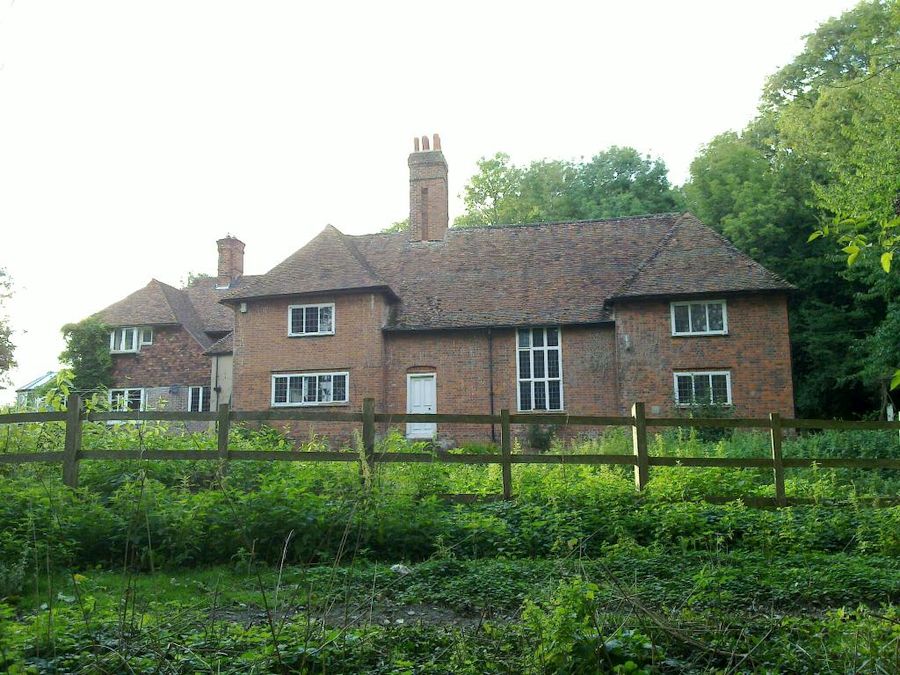 Caption & credit
The Garth Outside
Image 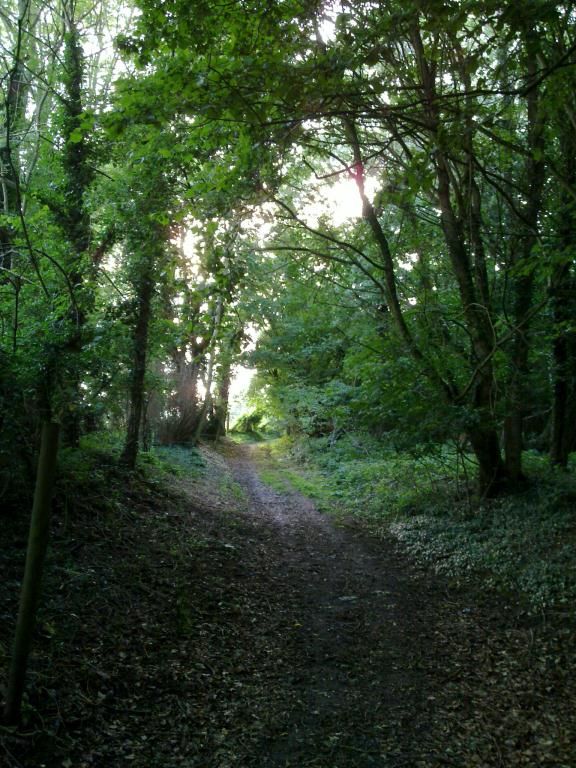 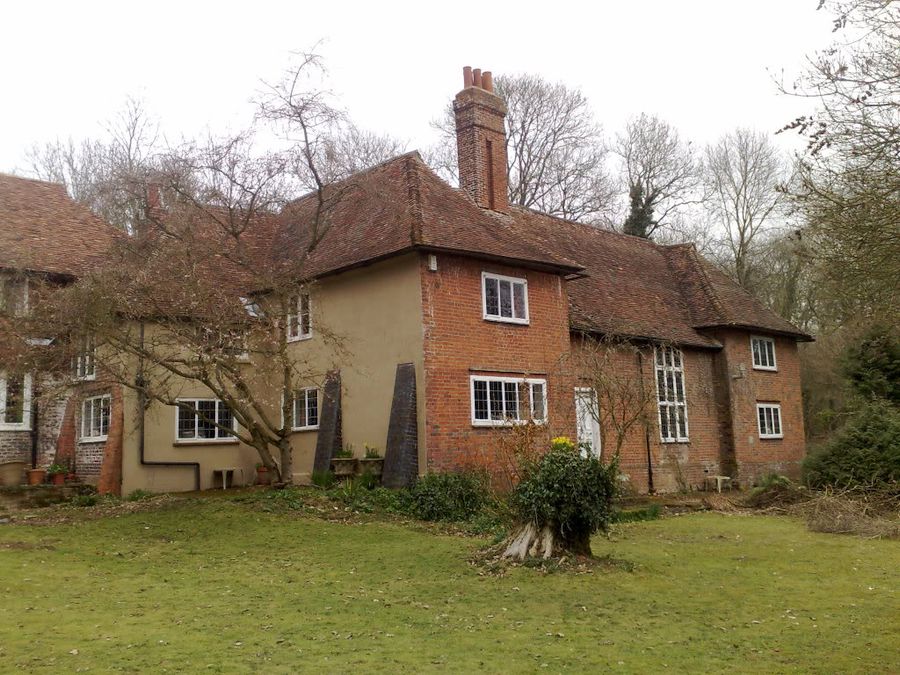 Caption & credit
The Garth outside
Image 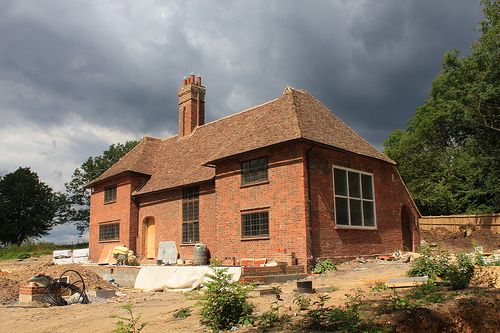