The Patrol had 2 OBs. The first was a temporary facility in a small, above ground farm building, which was adapted by the Royal Engineers. The building has been largely demolished but some walls remain today. Once their underground OB had been completed a short distance away, on the west side of the hills, the first OB was made into an ammo store.

The OB was visited by the local Defence of Britain volunteers on an organised basis and the structure was identified as a standard Royal Engineer design, with vertical shaft access, approximately ten feet deep, with an ammunition / explosives store to the right of the main chamber. This store was constructed with corrugated steel sections and was about eight feet long.

The main chamber is the standard Nissen hut type corrugated steel structure, of semi-circular section, and was about ten or twelve feet long. Tony Barling recalls that there were bunks provided for the Patrol. This part of the OB has now collapsed. An escape route was provided for the occupants and consisted of an eighteen inch sewer pipe. This went out of the end of the main chamber, was about thirty feet long and curved according to Tony. The exit from this, which can still be seen, is out of sight of the main entrance to the hide and in the side of what appears to be a small disused quarry. Tony Barling described the cover for the main entrance as a wooden structure, covered with roofing felt. On top of this was fixed wire netting, into which was pushed branches and leaves and when the hide was vacated the margins were covered with more leaves so that it was quite invisible. This top was counterbalanced so that it could easily be moved from the inside or out. This cover has now gone and a temporary metal plate put over the shaft for safety. There is now no sign of the counterbalancing system or the means to climb down the shaft. The OB is on a north-south orientation, with the access at the north end and the emergency exit to the south. The air intake was through a hole in the butt of a tree.

In addition to the main hide, the Patrol had a separate explosives store in another wood in the Alfrick area and Tony Barling could recall having to bury, close by, some phosphorus bombs which had started to leak. 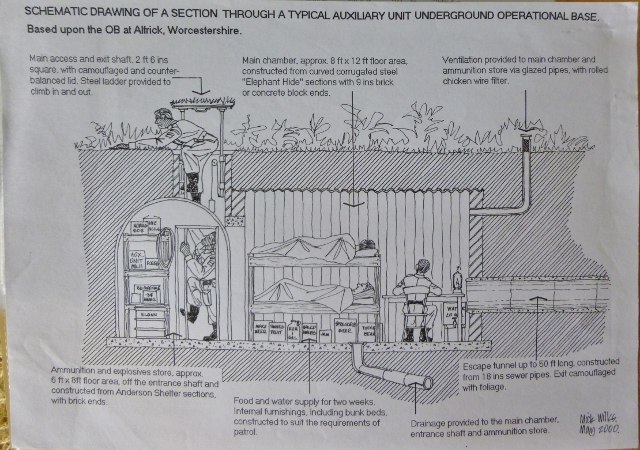 Caption & credit
Alfrick OB design (from Mick Wilks)
OB Status
Collapsed with some visible remains
OB accessibility
This OB is on private land. Please do not be tempted to trespass to see it
Location

The A44 and railway line between Leomister and Worcester were obvious targets.

Elizabeth Barling (Auxilier Tony’s sister) was recruited as courier to pick up messages left by her brother in an old metal teapot placed in a hedgerow close to the OB. This message was then to be taken to the van Moppes.

Chris Bullock could recall going to a quarry near Evesham for explosives and revolver shooting practice, most likely the quarry on Bredon Hill.

Horace Philips went to Coleshill for training, travelling with Bill Plaskett in an Army staff car. He remembered the stables being cold to sleep in but had the best cup of tea during wartime at Coleshill !

Tony Barling remembered having trained in the use of plastic explosive. He remembered making up packages of the stuff, putting two time-pencils in to make sure it went off and wrapping the package in sticky tape.

He could also recall using Bickford fuse which burned at two feet a second. Another device was an instantaneous fuse for booby-trap work. He was able to describe the time-pencil in some detail, recalling that it incorporated a copper tube within which was a glass capsule containing sulphuric acid. The Auxiliers always put two time pencils in to ensure the explosion occurred.

Barling can recall using sticky bombs, which they used to practice using by throwing them against an old traction engine. He thought it would have been a wonderful weapon as long as you did not stick it to your clothes ! Another weapon he had fond memories of was the Tommy gun issued to his Patrol. He remembered it came in a beautiful wooden box and he used to practice by firing it against a brick wall at Alfrick Court. The wall still exists today and was subsequently repaired using concrete blocks.

Another private weapon of Tony's was a sleeved down Martini-Jenry Service Rifle which fired .22 bullets using an extra large cartridge. It was apparently very powerful but it is not clear whether he retained this for use in the Auxiliaries.