Branscombe is a village on the south east coast of Devon between Seaton and Sidmouth.

The Operational Base is located in a wood called Castle Down, known locally as Blackbury Plantation, just below the Iron age hill fort or settlement of Blackbury Camp.

Though quite below the brow of the hill, the location is easily accessible through pasture and track ways so as not to attract suspicion. The nearby fields are covered with flint, but the area of the OB is quite sandy. There has been a suggestion that they made use of an old badger set to make work easier but therefore dictating the location and orientation of the OB.

The minimal covering of vegetation allows for the out line of the main body of the OB to be seen. Built on the side of a slope it is possible that erosion could mean the depth of soil coverage is now very different from where it was in wartime. The roof section of the main body of the OB appears to have collapsed along the rivet lines of the Nissen structure leaving either end block wall intact. Without excavation it is unknown if this section has been properly filled in or just filled to a level with collapsed debris.

The entrance chamber to the east was excavated to a degree in 2020 revealing a 9 foot 6 inch long block lined tunnel 3 foot wide in the inside. Eight, what could be scaffolding poles, were concreated in place to form the roof that were placed 10 inches apart. Three are missing. It is unclear what was placed on top of these to create the roof.

This leads through to the main chamber which appears to be around 15 feet long and could be around 10 feet wide at the base. The wall near the entrance tunnel appears to be block built and at the other end (west) of the main chamber is another block built wall with a 25 inch 'doorway' with a wooden lintel intact and a square ventilation block to the left. This leads through to a small, second chamber which is only 19 inches long. This then has another squared opening which should lead through to the escape tunnel which would then open out around a third of the way down the steep slope. The smaller area is the same structure as the main chamber and equally as wide but separated by the block wall. Being this narrow it is difficult to understand the practical use of this area. Near to the escape it may have been used to store explosives etc as they would have been to hand while making an escape.

The escape tunnel is again block lined with metal bars used to construct the root. It leaves the main OB at an angle. It is 29 inches wide in side.

Sergeant Morgan Selley; “There were only seven of us and we were out at Blackbury Castle so no one would find us. The army had dug this big hole for our shelter in the ground out there. You got into in by what looked like a big badger hole which we would always cover over with turf and leaves when we left".

As Selley suggests that the entrance looked like a badger hole it is possible they used the escape tunnel more than the entrance. 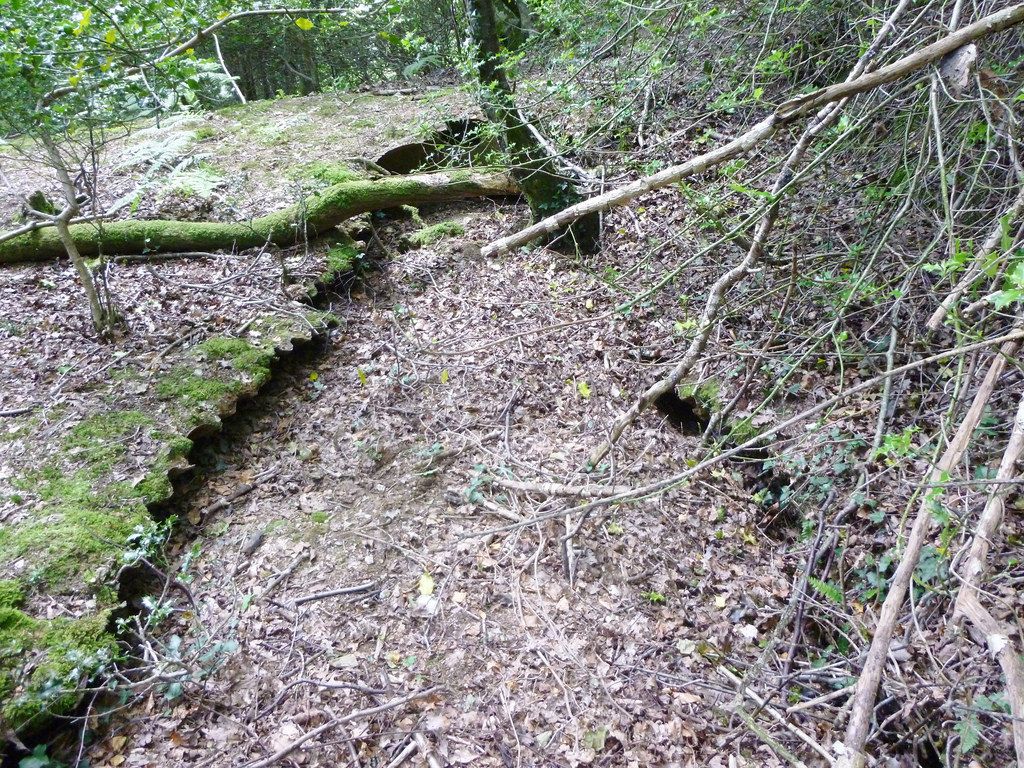 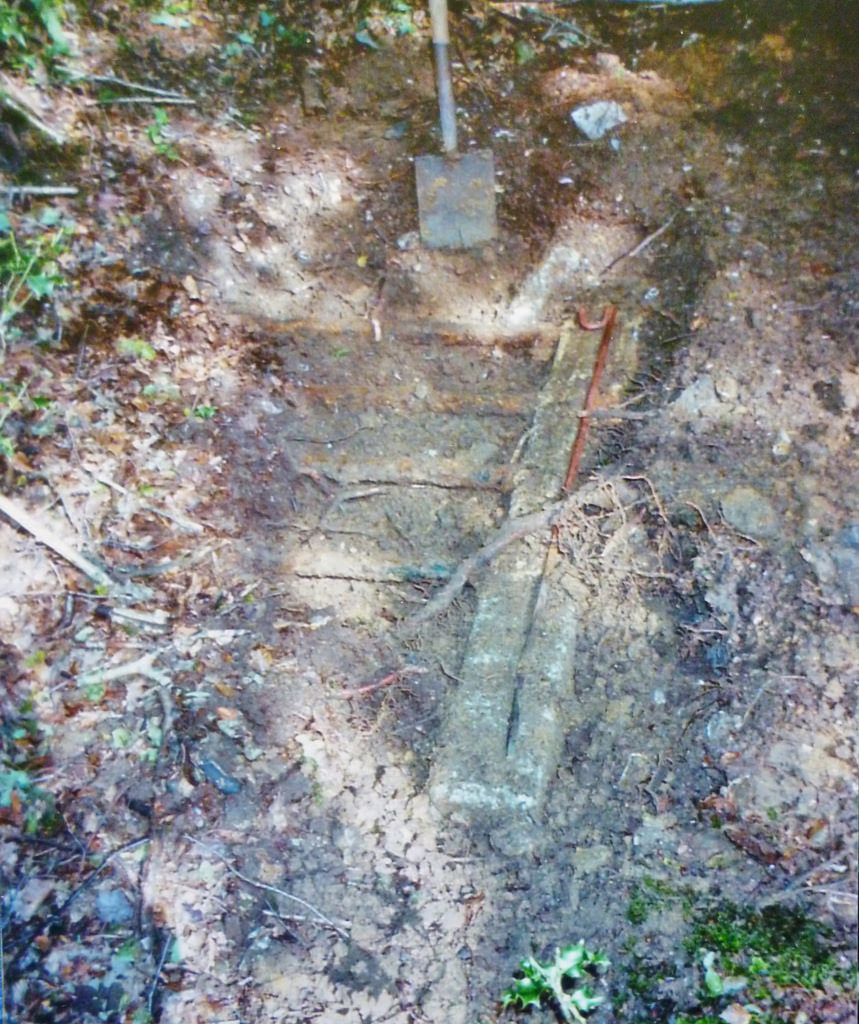 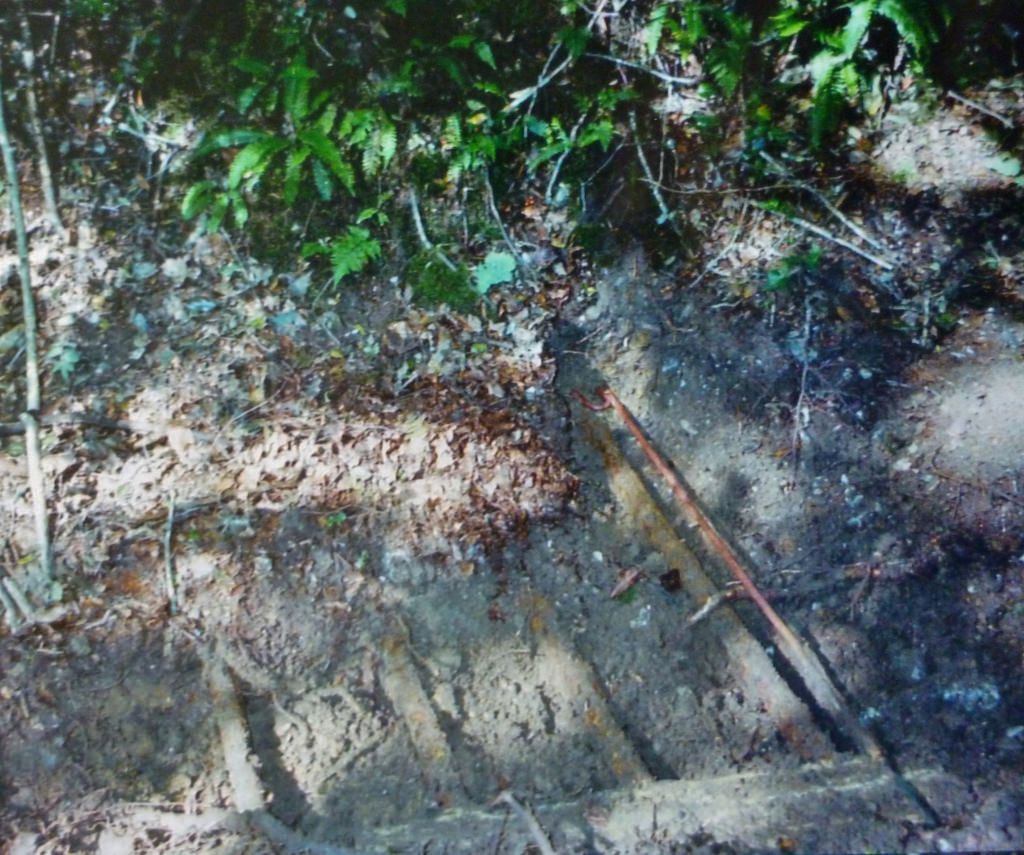 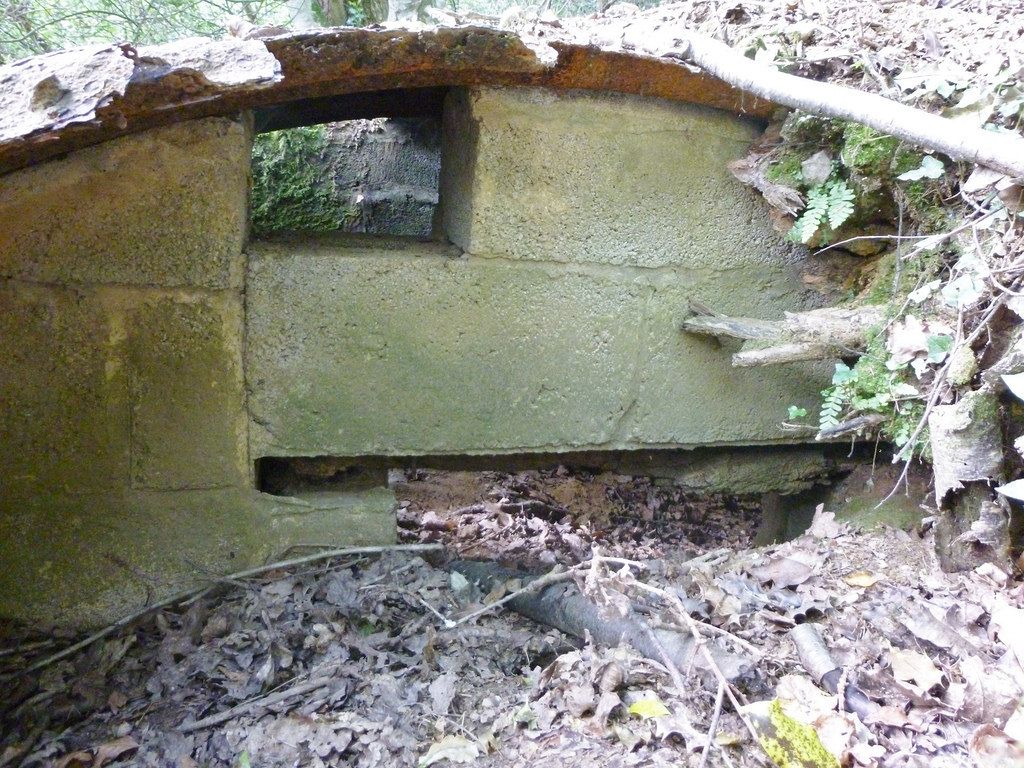 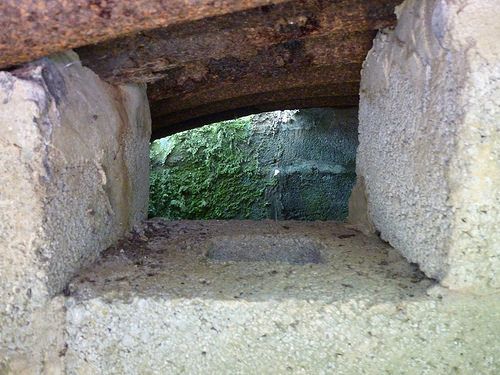 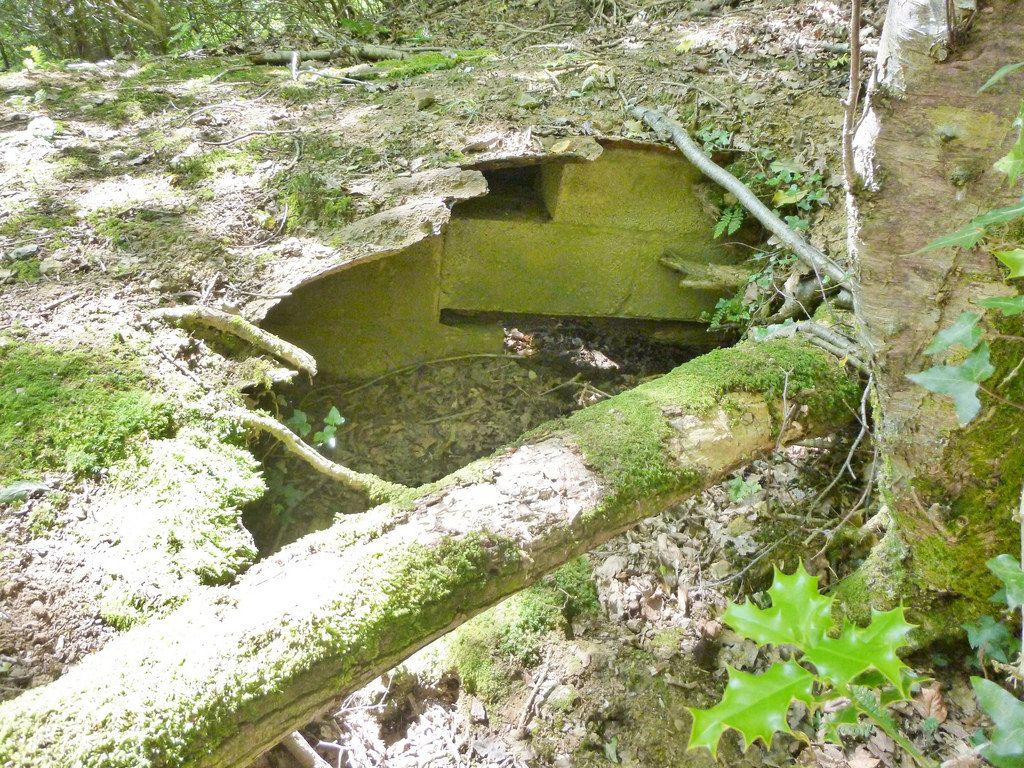 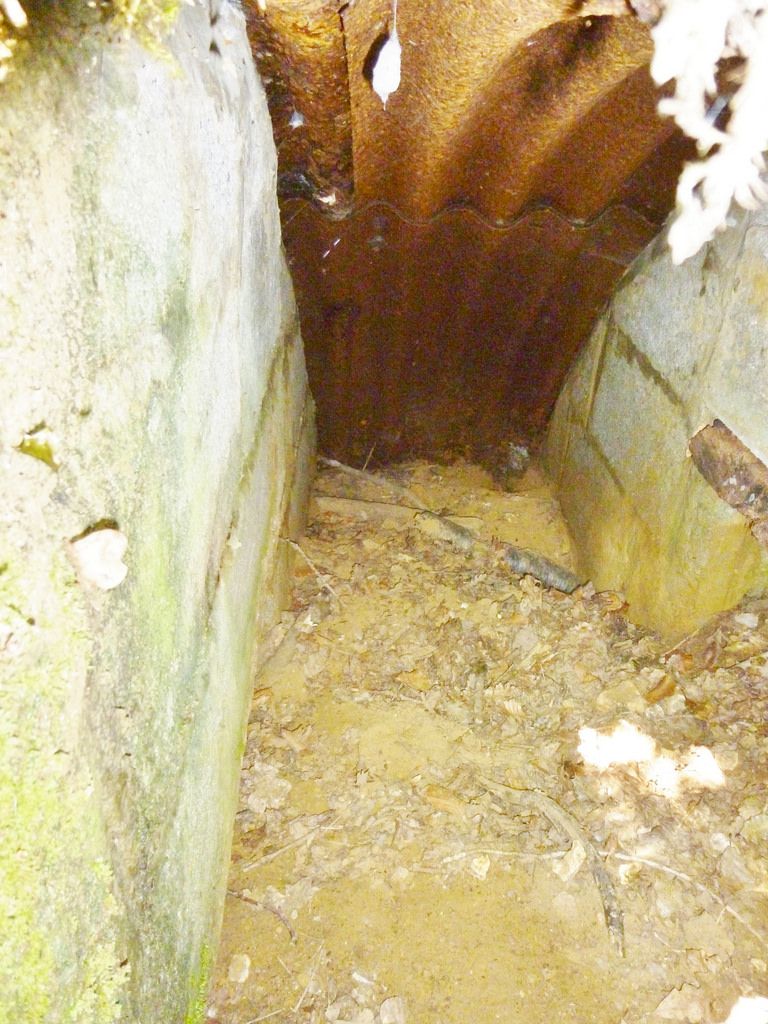 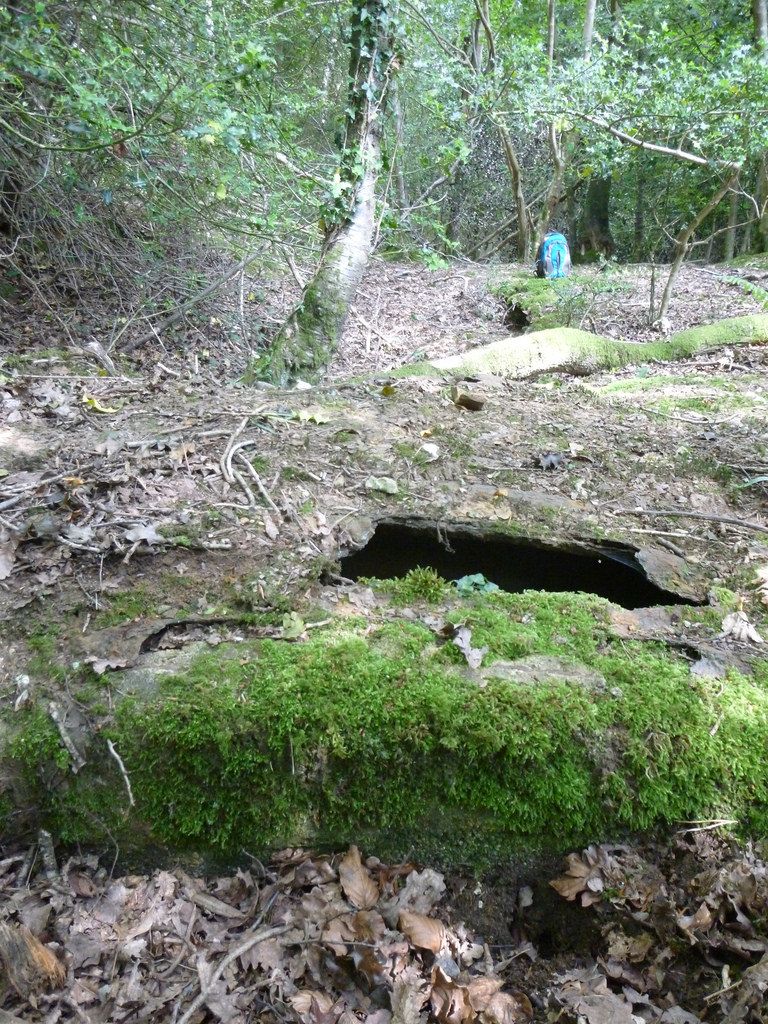 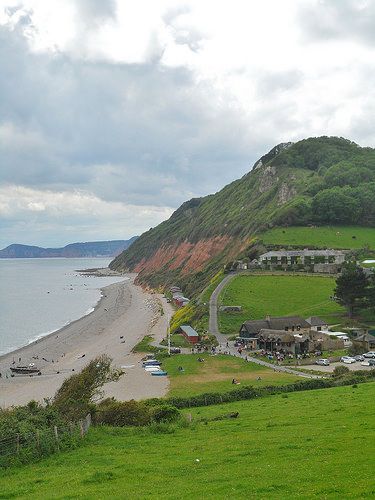 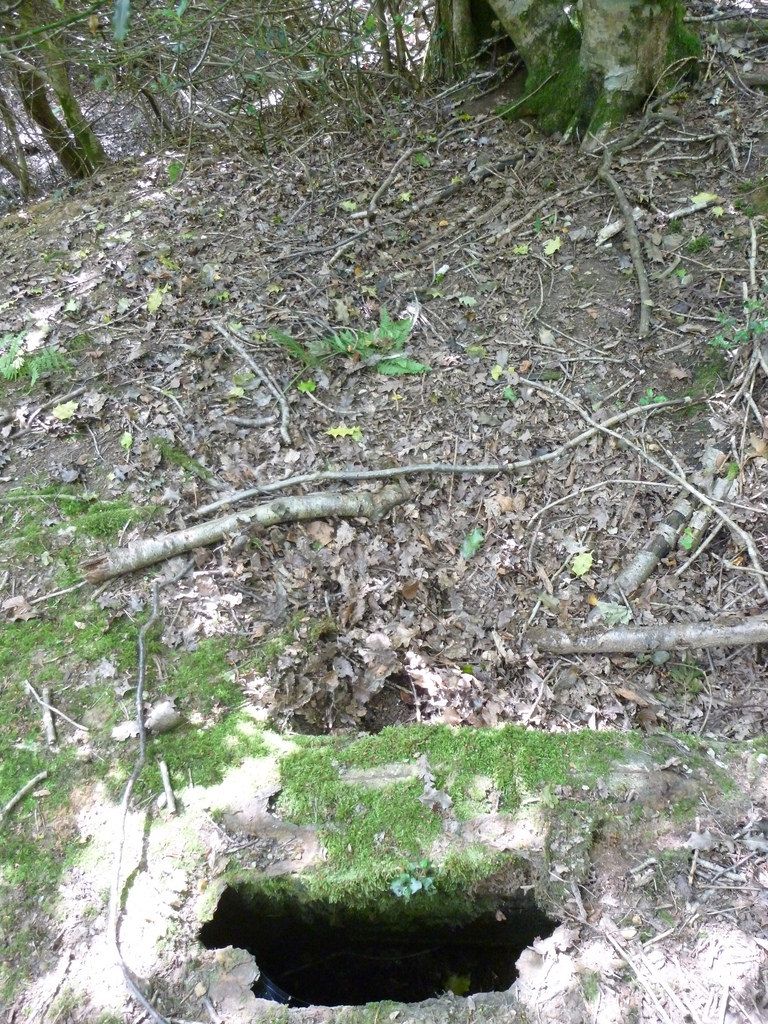 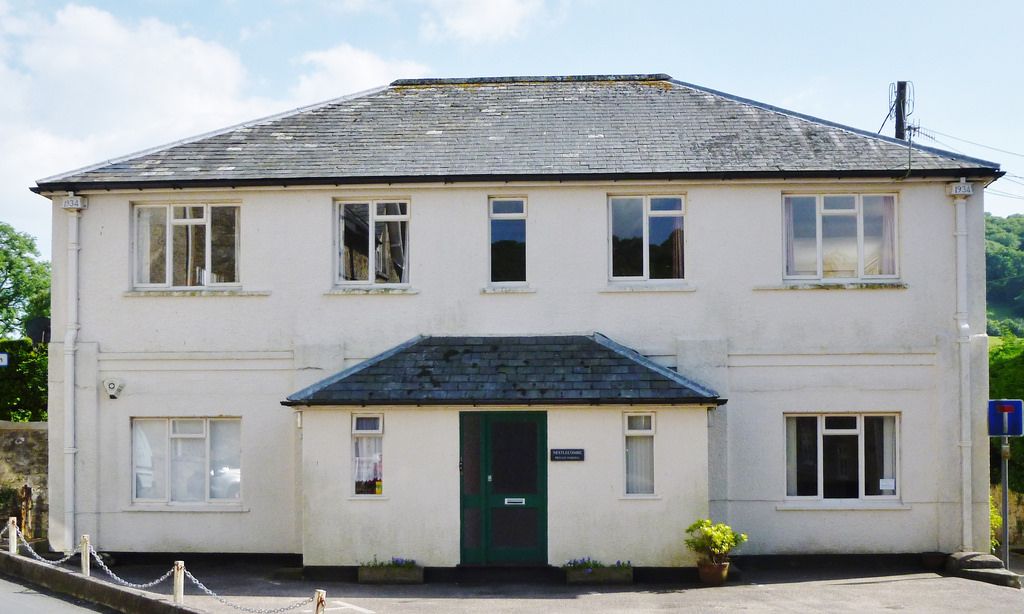 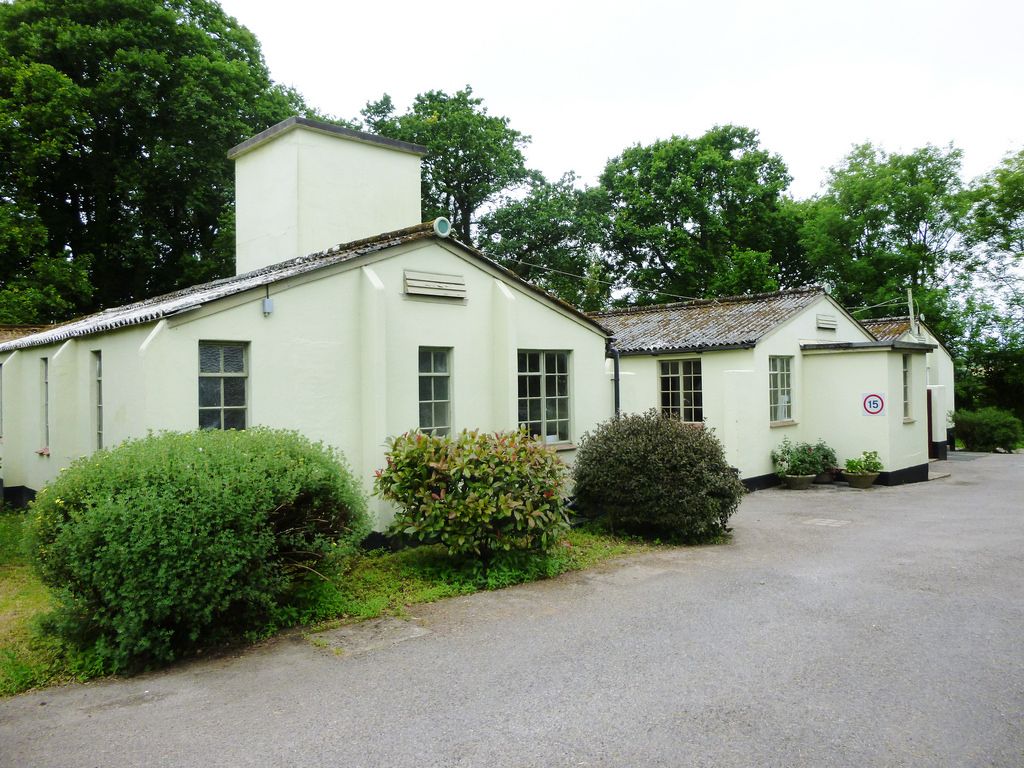 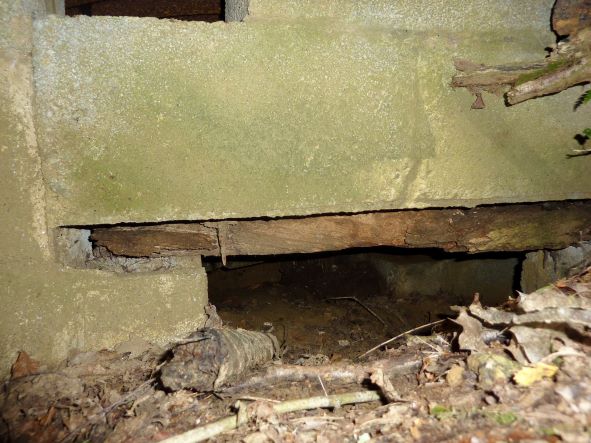 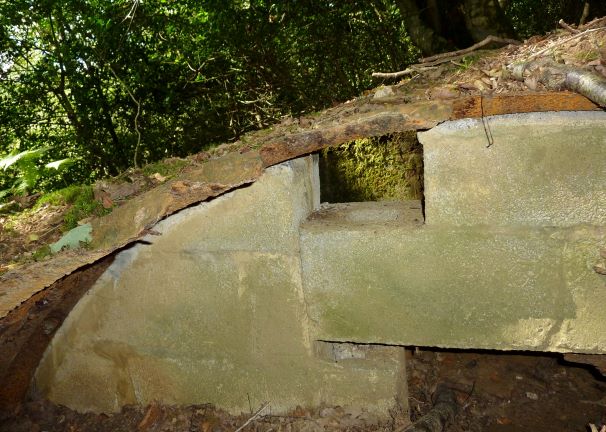 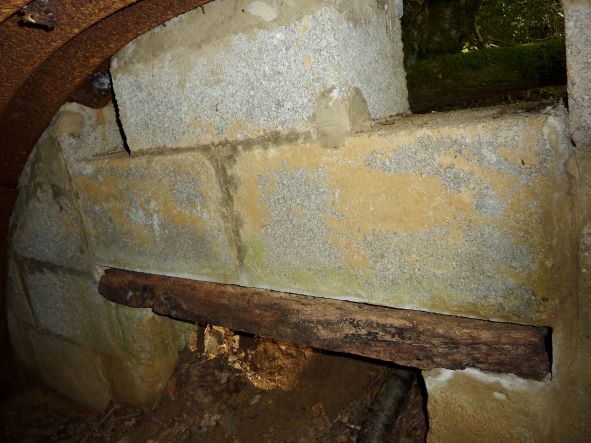 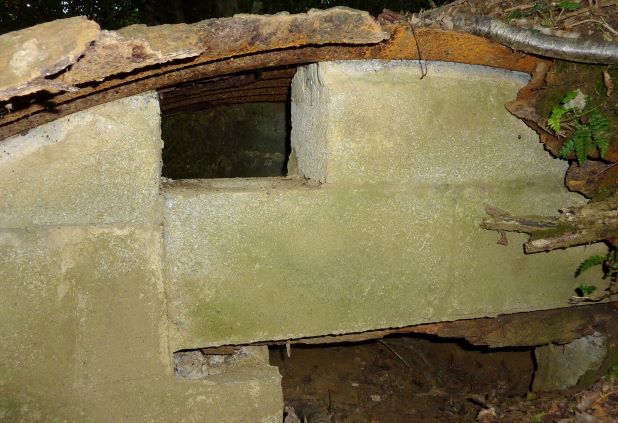 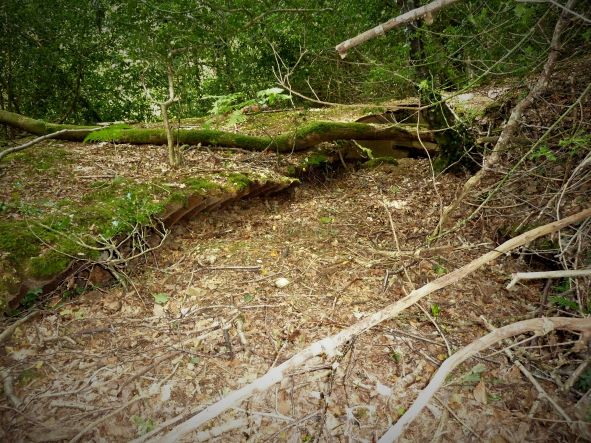 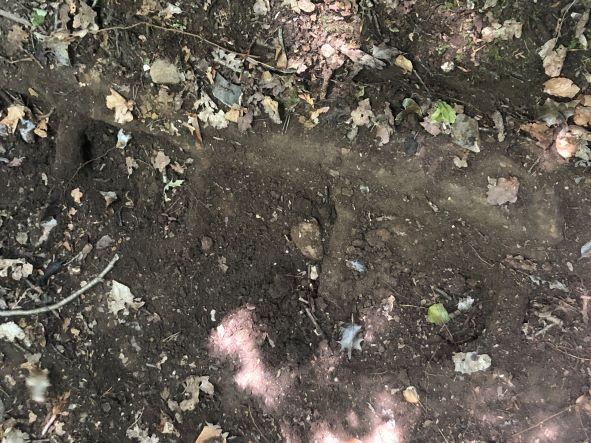 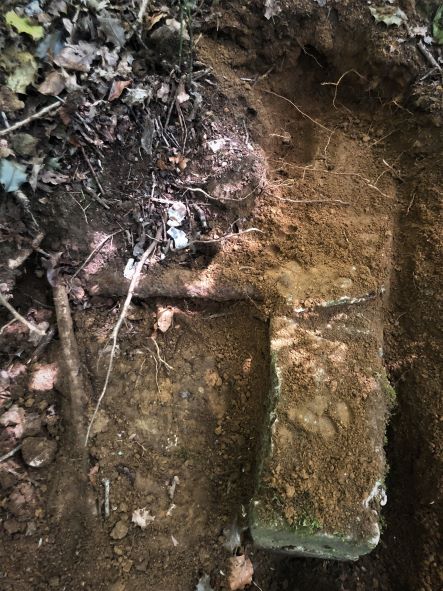 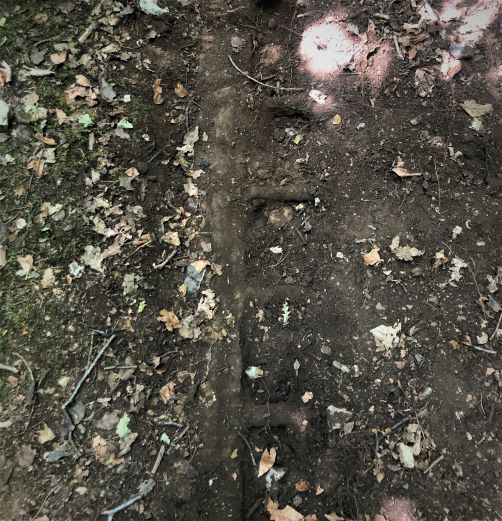 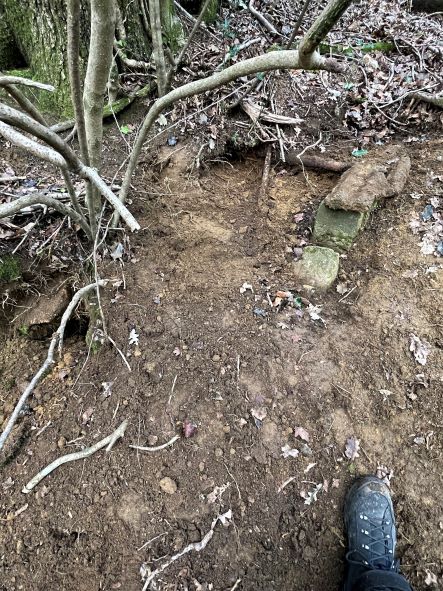 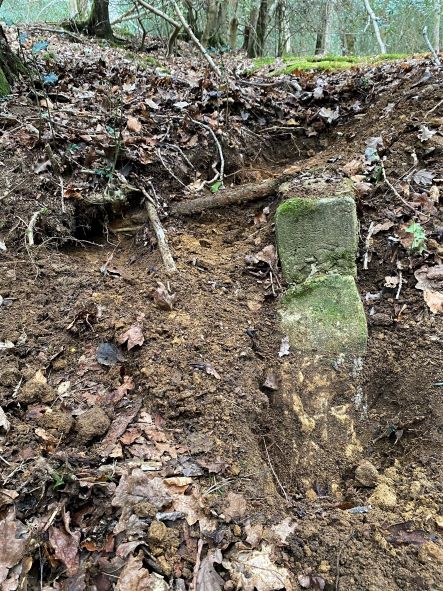 RAF Branscombe Chain Home Radar at Kings Down Tail, where the buildings straddled the (present) A3052, was certainly a training target (see below). Off limits to the local people it was shrouded in secrecy.

Blocking roads from the beach at Branscombe Mouth up to the main coast road could have slowed supply routes.

In 1941 the firm of C. Nestle & Co. Ltd relocated from London to Branscombe to escape the blitz. The company continued to make hairdressing products but this was predominantly a front for a munitions factory. Though clandestine, the factory was an open secret in the area and would have been advantageous to an invading army especially if allowed to continue working.

Though there is no evidence that individuals were targeted, Branscombe was the home for Lucy Temple Cotton and her son Rafe. Lucy had become friendly with Oswald Mosley and by the late 1930's Rafe was the lead organiser for Devon, and a parliamentary candidate for the British Union of Fascists, the “Blackshirts”. It is known they made trips to Germany and met Hitler and were hosts to Von Ribbentrop when he visited Devon. Arrested in June 1940 they were fairly quickly released and allowed home, though kept under surveillance. Lucy's youngest son Paul was shot down and killed while serving in the RAF.

In 2005 Jack Denslow of nearby Bovey Patrol was interviewed by the history department of Colyton Grammar School. He recalled that many of the local Patrols would meet up near Seaton Water Tower and train together in the area. Within the interview he talks of Thorverton where the Devon Scout Section trained Auxiliers on weekend courses from all over Devon.

Jack Denslow: “There was a hall there [Thorverton] and seven Patrols met there and when we got there they gave us a map. On the map there was just North, South, East and West and just a red dot and in the middle of the night we had to find that dot. Strange countryside...black...It was very different. I had to lead Branscombe Patrol, not my own...I led it where I thought I would find it...they only had about half of us found our targets".

Dave Seward – talking about the Patrol's raid on the RAF base; “Well, to test the security of the place, I think it was the Home Guard Commandos were detailed one night to enter the place if possible, leave their calling card and give themselves up. I would think Arthur Irish might have been part of it [and] Phil Selway. Anyway, they got in through the barbed wire fence, they left their calling card and they disappeared, no trace was ever found of them. After that the security was considerably tightened. That's when they put up all the extra concertina wire about 20 feet deep instead of 3 feet.”

Bill Carpenter; “The Home Guard [Auxiliary Unit] once took part in manoeuvre with the army and this gave rise to an incident which was described many times over the years. The Guard's most formidable member was Dick Tedbury who, although not a man to provoke a fight, was always ready to oblige anybody who wanted one. On this occasion Dick was armed with a rattle representing a machine gun post behind a hedge in Margell's Orchard. Soldiers were deployed to deal with Dick and his rattle, which Dick found to have no stopping power. Dick however, had very considerable stopping power, as the soldiers discovered when they tried to remove him by force. After the fight, Dick declared an armistice and invited the army to come and collect their “dead”.  On one occasion, during explosives training, one Auxilier managed to pull a pin without throwing an explosive device far. “Flat” called the officer in charge as there was an almighty explosion. The squad managed to hit the ground, just escaping shrapnel injury.

Sergeant Morgan Selley; "We used to go out on Sunday mornings to look at things and make sure we knew how to put them together. By then we had a proper uniform, even great coats, we were as pleased as punch to get that.”

Ralph Cox; “I remember being shown the contents of boxes in a shed which was on “Pop” Selley's Farm. I now know it must have been used by the Branscombe Auxiliary Unit as a forward supply depot. An immediate use store rather than the OB facility out at the secret site in Blackbury Plantation. If called for, the local unit would equip themselves with the necessary items to carry out the operation quickly.

The shed is not there any more – it's long gone. I remember it back in the mid 50s when I was a teenager. It would have been big enough for two animals and I remember seeing in the boxes: ammunition, time pencils, rolls of fuse cord and trip devices but no guns. Not stored in metal ammo boxes, just wooden cases. Not in plain view but stored along with the animal food, hay, straw etc and hidden under it....Another gun kept down on “Pop” Selley's Farm, out the back in the old engine house, was a pump action .22  Rifle. I have since found out it was just like the one issued to Auxiliary Units without its telescopic sight or silencer.

At firework time, with an older group of village lads, we experimented with time delays...but later, when I was older and knowing the contents in the shed...along with the fireworks we had bought and borrowing some items from the shed we were able to create delayed remote displays. Together we would set up mysterious events all by themselves in the village...allowing a remote display to take place after we had gone...

I also remember seeing the last of the issued Noble 808 gelignite being used to blow up a hollow tree stump for my father on the farm one Sunday morning. I believe the leftover ammunition was buried somewhere in a local farm hedge.”

Sergeant Morgan Selley; “The demolition squad was a different thing altogether [from the Home Guard]. We had theses explosives and goodness knows what, gelignite and stuff, enough to blow up cars or a tank.
We were non-existent. We had to go underground so that if the Germans had landed we more or less had to go out at night, lay out our explosives and time switches, buzz off and it would all go off an hour later....

In fact having started with a stick [Home Guard] I finished up with four guns including a Bren gun and a Luger revolver which father had brought home from the Great War... the bonus was it fired the Bren gun ammo as well. It was all kept in the house here. There was no lock and key. We didn't bother with that. Well I had this chest of guns, explosives and booby traps so it must have been a serious business at the time.... We were looking for an invasion if one ever came. But they were never going to come here, not to Branscombe.... Still, had they come I suppose we were, in our way, ready and waiting...”

Some of the 9 Patrols within Group 6 in East Devon were based very close together. Due to this there maybe some confusion over Auxiliers and their exact Patrols.

Research suggests that this information on Branscombe Patrol is accurate but we welcome any corrections.

A local community exercise called “The Branscombe Project” was started around 1994 by locals aiming to record Branscombe's past. This has lead to an excellent resource of the history of the village. The Branscombe Project have kindly allowed us to use excerpts of interviews, taken over the years, remembering the Auxiliers and their actions.

Sue Dymond, as part of the Branscombe Project, has published a book Branscombe's War 1939-1945 which gives a fine insight into the wartime lives of the villagers.

The kindness of the very patient Ralph Cox

Sue Dymond and The Branscombe Project.

Colyton Grammar School for supplying the interview with the late Auxilier Jack Denslow.