Brixham is divided into the fishing port of 'Fishtown' with the 'Cowtown' area being a farming community. The town is located on the west side of Torbay on the south Devon coast.

The Operational Base is located on the edge of Windmill Copse on Guzzle Down, near Hillhead on the outskirts of Brixham.

All the Auxiliers, apart from Frank Drew, would have been able to see the Operational Base area from their windows.

The roof of the entrance and main chambers have collapsed but the block entrance shaft and end walls of the main chamber are almost intact. The corridor leading to the escape tunnel is, at present, intact but fragile and liable to collapse. The concrete pipe making up the escape tunnel is intact though the stone walling once covering and disguising the end has fallen away.

The location for the Operational Base was excavated by the Auxiliers at evenings and weekends, usually after a full days work. They disposed of the soil in the surrounding area. The Army appeared with the materials for the construction but left the men to build it themselves. When finished, Arthur Bedford, a carpenter, made sure they had wooden flooring and shelves.

The outside of the entrance hatch was packed tight with moss and leaf mulch to hide it. As it was a shallow tray on the surface it was rare that they had to repair the disguise.

The block built entrance shaft was approximately 4 foot by 4 foot and lead into a small chamber. A low doorway into the main chamber meant to men had to duck to get through.

A wooden removable ladder was used to descend the shaft.

The entrance chamber joins the main chamber at 90 degrees around 18 inches from the end wall, along the longest length.

A single course of concrete blocks were laid, then timber placed on top and a Nissen corrugated iron structure placed on top of the timber. It is unclear how or where any ventilation pipes were laid.

The main chamber ended up approximately 15 foot by 12 foot.

No attempt appears to have been made to destroy or dismantle the OB post war.

At the far end away from the entrance the Patrol built a narrow corridor of half block and half corrugated iron leading to the large concrete pipes used as an escape tunnel.

This would have originally be covered by stone to disguise it as part of the stone walling.

The Army built an Observational Post in the copse below the OB which was a small wooden hut looking down the valley and main road towards the town and harbour and sea beyond.

It is thought that the OP and OB were able to communicate as it has been remembered that a wire ran between the two, hidden in the hedgerow.A small flattened area of ground shows where the observation post was but nothing remains.

Whenever the Auxiliers walked to the Operational Base they followed a different route every time so any observers would not see a regular routine. Contemporary maps show paths leading to the site from Hillhead, Laywell Lane and Milton Street (directly opposite Sergeant Minns house). 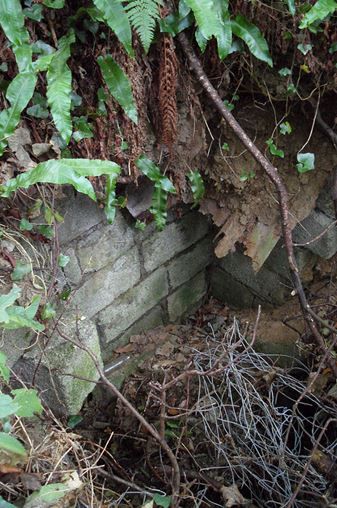 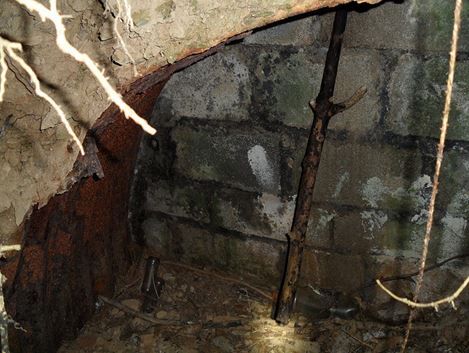 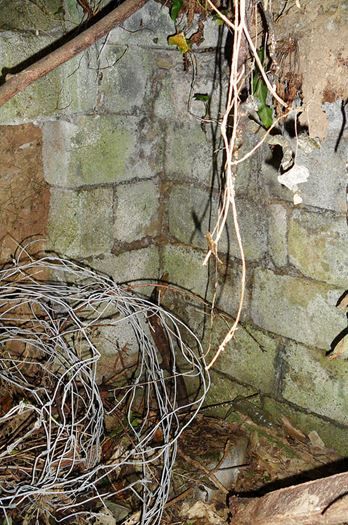 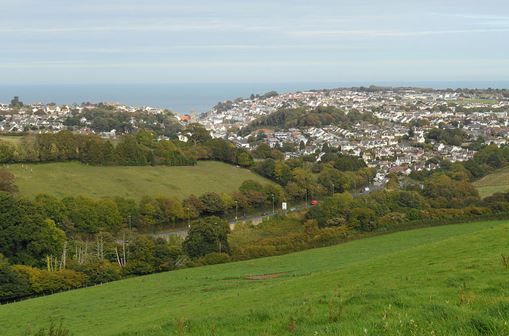 Caption & credit
View from OP down to Harbour
OB Image 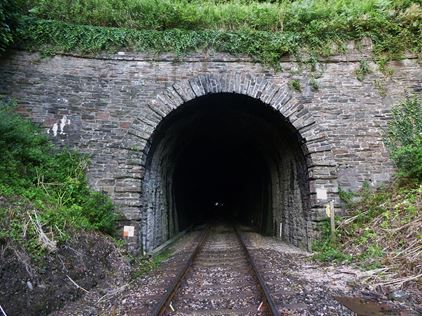 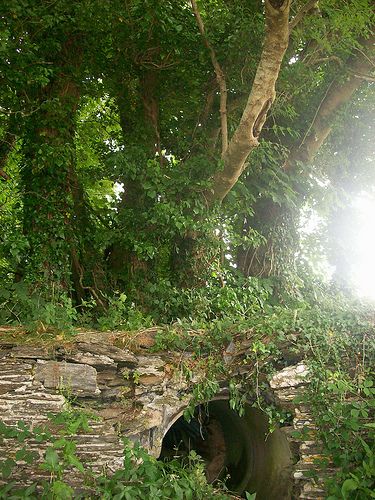 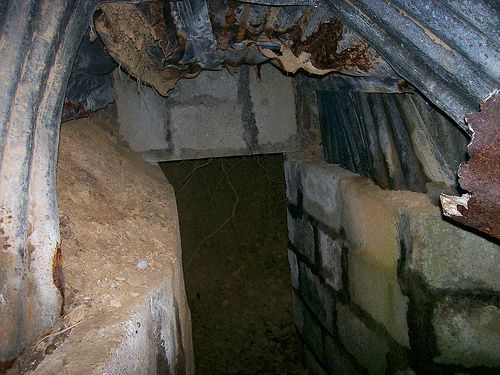 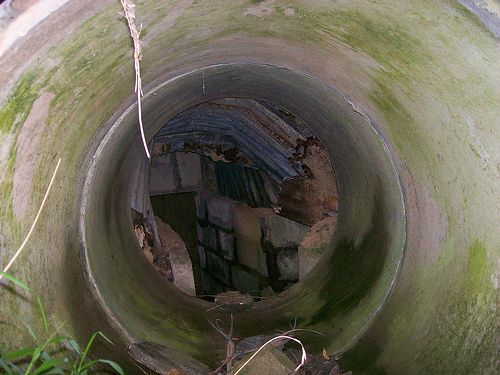 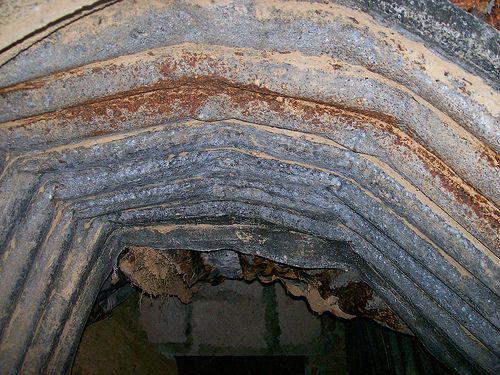 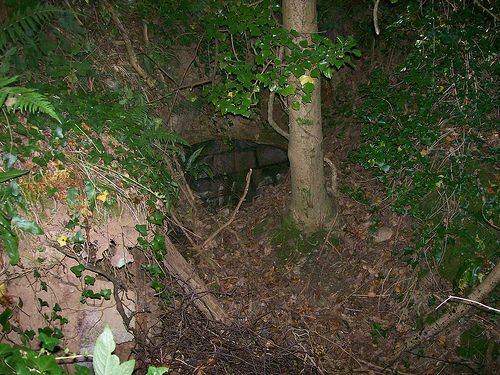 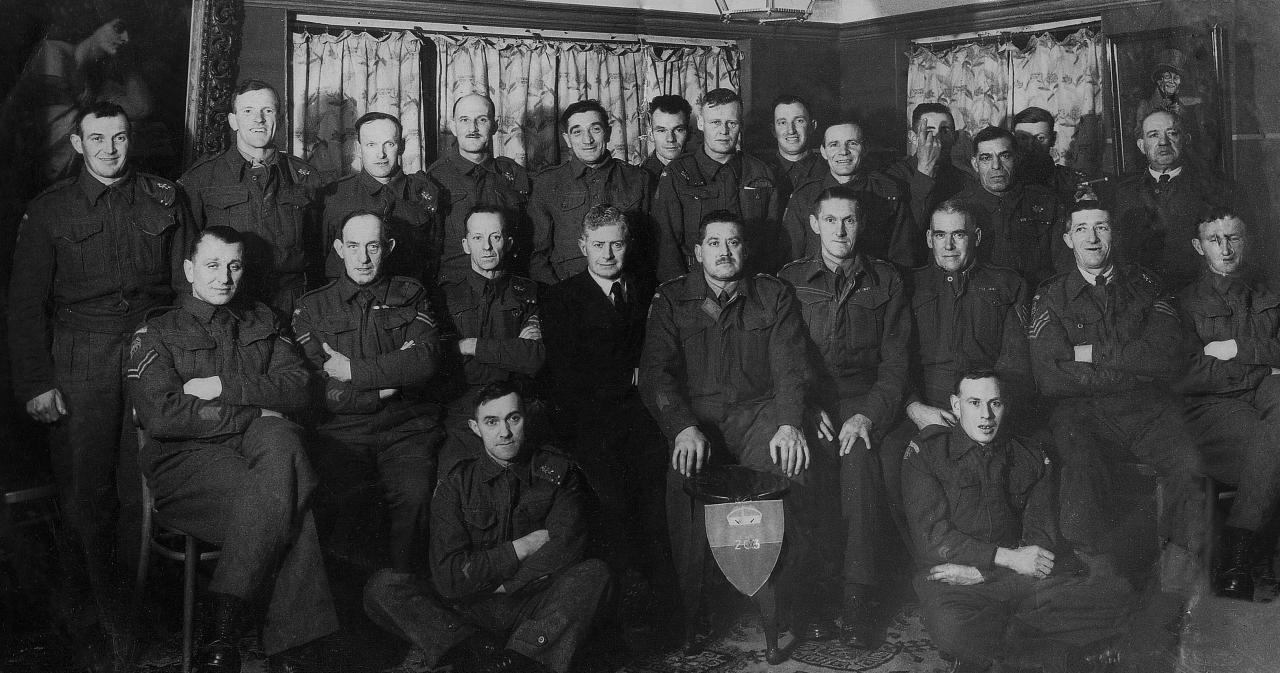 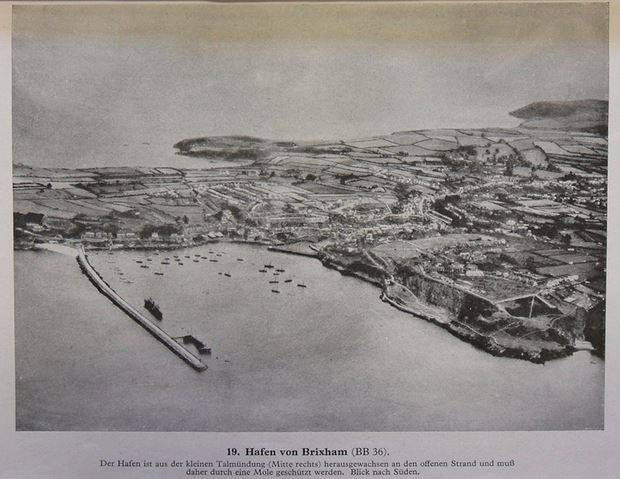 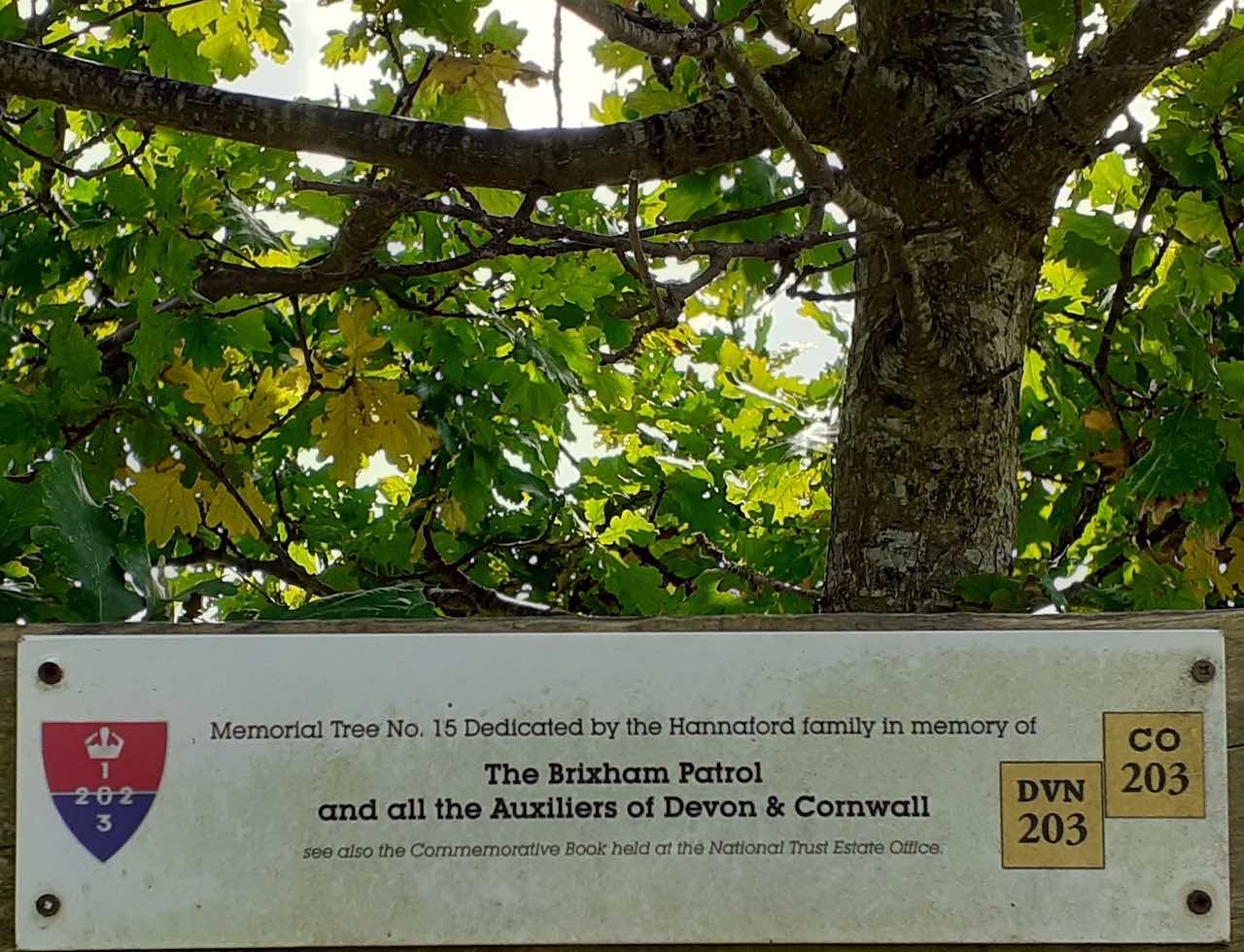 Caption & credit
Brixham, Stoke Gabriel and Marldon (colourized by Stephen Lewins)
OB Status
Collapsed with some visible remains
OB accessibility
This OB is on private land. Please do not be tempted to trespass to see it
Location

The most obvious targets in the area were roads and transport links. Blocking the road from Kingswear to Hillhead would cut off any troops and supplies coming from the River Dart.

Doing the same on the main road in and out of Brixham, as seen from the Patrol's Observational Post, would cut off the supply route from Brixham Harbour.

Now part of Dartmouth Steam Railway, blocking the rail tunnel at Greenway (Agatha Christie's House) would again prevent supplies from the River Dart. Frank Hannaford recalled the tunnel was his job and he once said he had pre-drilled holes near the entrance to use explosives to create a land slip.

This would effectively cut off the two main landing sites in the area, blocking supply routes.

Two large fuel tanks near to Brixham breakwater were another known target. Although the present landing hards below the tanks were not built until 1943 in preparation for the D-Day landings it was thought that blowing up the fuel would compromise the use of the harbour and put the fuel out of enemy use with little risk to local life.

A known target and one that was used as a training raid was the RAF Radar Station based at Coleton Fishacre. The station provided radar cover for Lyme and Start Bay. It started out as camouflaged caravans sprouting aerials and a number of RAF personnel in a small plot near the entrance to the farm drive.

After a few months, a sentry was put on the lane to the left of the entrance of Coleton Fishacre and a camp was built there. There were a number of Nissen huts and in the middle a Nissen hut with a big rotating dish aerial on a tower above it and a blast wall surrounding it.

Patrol training took place every Sunday and 3-4 times a week in the evenings. John Baker recalled: "me and John (Hannaford) were always late on a Sunday, Seargeant Minns would shout at us then smile and shake his head ! Him and Frank (Hannaford) were close and we knew Frank would always look after us...”

John Baker thought that almost all the original Patrol went to train at Coleshill House. Travelling up by train he was not expecting to have to start training immediately on arrival. He found the training hard and wet and muddy and with few comforts. “...we had great fun but was always reminded of how serious it all was whenever we went to Highworth..”

Training in field craft and stealth movement were carried out in the fields behind Mansands Beach. One night the Patrol were particularly alert when flashing lights were seen out at sea and a light responded from Scabbacombe Head. Clarence Hicks was sent to inform the authorities while the rest of the patrol spread out to race to the headland. Nothing was there when they reached Scabbacombe and when the Police approached the area the men decided to disappear into the undergrowth rather than face questions about their movements.
Clarence was left to face the questions alone which he never let the others forget.

A night spent practising stealth movement saw Sergeant Minns and Frank Hannaford watch as the rest of the patrol tried to move from one side of the valley (behind Mansands) to the other, without being seen. The men were followed all the way by a group of curious cows revealing their route.

Shooting practice took place in a small quarry at the top of Laywell Lane. It is remembered that John Hannaford could hit a primrose flower from one side of the quarry to another.

Canadian troops were stationed at Lupton House immediately below the OB until 1943 when US troops took over the house and grounds.

Lupton Camp (K6) had quite a few Units pass through, a couple of which were lost in Operation Tiger.
Towards the run up to D-Day, to keep up the moral of the Patrol, Sergeant Minns organised practice raids on the camp. The patrol would enter the camp over night and re-arrange items. A story is remembered that one time they actually moved a tent from above some sleeping GI’s for them to wake up in the morning staring at the skies.

A training raid was carried out at the RAF Radar Station based at Coleton Fishacre. One night, after meeting at Sergeant Minns house, the patrol made their way to the station, through and past their defences and leaving notes around the central hut to show they had visited.

For a while after this the camp was guarded by an RAF Regiment with Daimler armoured cars.

John Baker recalls, "Sticky bombs scared me the most........had no fear as a young man but, sometimes in the middle of the night I would think about what we were ready to do and it scared me.....”

Frank Hannaford's wife Mabel found a box of grenades in the house and asked Frank what they were. When Frank told her she didn't want to know she demanded they were removed from the house.

Some items were obviously kept, as post war, in the Hannaford family home, garden bonfires were often started with a small explosive device and a fallen tree was once moved by being blown up. Frank Hannaford's youngest son Bill, could remember playing in and around the OB and taking pot shots at rabbits with his fathers revolver.

In 1941 the Nazis produced a folder containing maps and booklets that were intended to be used as military intelligence documents for invasion.

In preparing for the invasion a vast amount of information, including maps and photographs, was assembled by the German military which resulted in the production of a series of military/geographical assessments, showing what might be found by those arriving.

Included was an aerial photograph of Brixham showing it's safe harbour.