Castleton in a village on the northern edge of the North Yorkshire Moors approximately 7 miles from Guisborough.

The Patrol's OB was to the north of Castleton built under a dry stone wall on the North edge of Danby Park. The OB overlooked the river Esk and Castleton to the South West.

The remains of the main chamber measure 14 feet 9 inches by 16 feet 6 inches and appears 6 feet deep. The walls were of corrugated sheet metal with wooden supports. Two glazed pipes remain in situ either side of the long wall of the main chamber. The roof was constructed by corrugated sheeting supported by metal poles 7 inches apart. The entrance / escape tunnel was a timber and iron construction and was 16 feet 6 inches long and 2 feet 6 inches square. The tunnel passes under the dry stone wall and exits in the trees of a small copse. There is a possible storage area just off the tunnel. The door appears to still be in place. No other entrance or exit has been found.

The OB is now collapsed leaving just a depression in the ground.

150 yards to the Northeast of the OB is a Observational Post which has a good panoramic view of the Esk Valley. The remains are a 3 feet by 3 feet by 5 feet deep, stone lined pit. Remains of corrugated sheeting were most likely a covering. A telephone cable has been found linking the OB and OP. 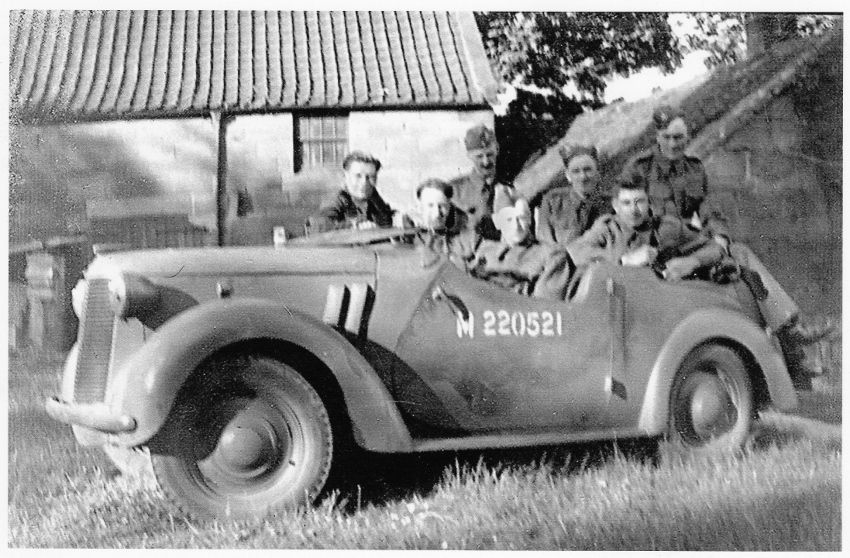 Caption & credit
Castleton Patrol in 2 seater Austin (from S Lewins)
OB Status
Collapsed with few visible remains
OB accessibility
This OB is on private land. Please do not be tempted to trespass to see it
Location

The Patrol's main targets would have been the Esk Valley railway to Whitby and crossing points on the River Esk. Also the A171 Whitby to Guisborough/Teeside road and other roads running north to south over the North Yorkshire Moors between the A171 and the A170.

The main aim was to prevent the Germans getting across the moors if they landed at Whitby. The roads and railway lines would be their main way of moving men and equipment form the coast inland towards York and the surrounding airfields.

The Patrol trained locally at the OB and the surrounding area. They also trained at Castleton with the Scout Section of The Green Howards and at Danby Lodge with the Area Intelligence Officer.

Some members went to Coleshill House for specialist training courses.

It is thought the Patrol had access to .38 Smith & Wesson pistols, Thompson Sub Machine Guns and 9mm Sten Machine Gun.