The town of Duns lies 7 miles north of Coldstream in the Scottish Borders. Several main roads cross through Duns. There were two Patrols in the Duns area.

The site is on a wildlife reserve although it still belongs to the current Feudal Laird Alexander Hay.

My guide on the day of site visit (20th August 2011) was Frank Richardson who knew all the Patrol members and is a native of Duns. He first visited the site in 1948 and at this time the OB was visible without the tree cover and vegetation that now encroaches the entrance hatch. What I could not find was any other entrance/escape hatch or the air vent/pipe that Frank found when showing the Laird it back in 2009.

The Duns OB sits just to the left of the tree with the V (right of picture) Not visible from view as the vegetation and scrub is thick, as well as the understory, below the main canopy is well established.

The entrance hatch is 700 mm x 620 mm wide and looks like there may have been a fixture to secure lid/trough type of cover. Just visible on the right of the image inside the shaft are the rungs leading down into the OB. Space between rungs is 500 mm.

Also visible on the facing wall is a section that looks like it leads off into the OB, from the top of the shaft to this ‘entrance’ is 800 mm. I could not excavate this as I require permission from the land owner, although I did an exploratory scrape around the edges and found that the section in the image does not go anywhere and you can access it from the other side.

What was not found was a pipe sticking out the ground a little distance from the entrance shaft that was visible a few years ago (according to Frank Richardson my guide) which I assume was a ventilation pipe.

Just behind the entrance is a long drop down into the former quarry.

Andrew Fortune rented the land where the OB was located. His daughter was always warned against going near the area. 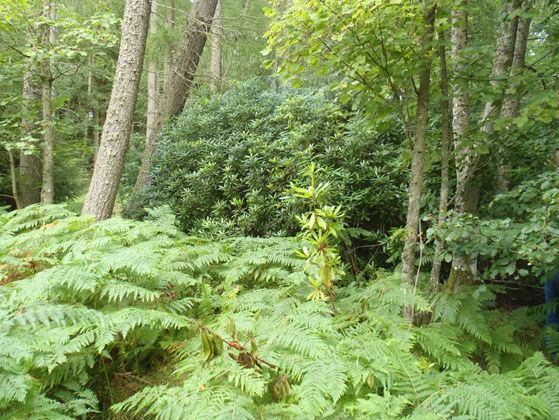 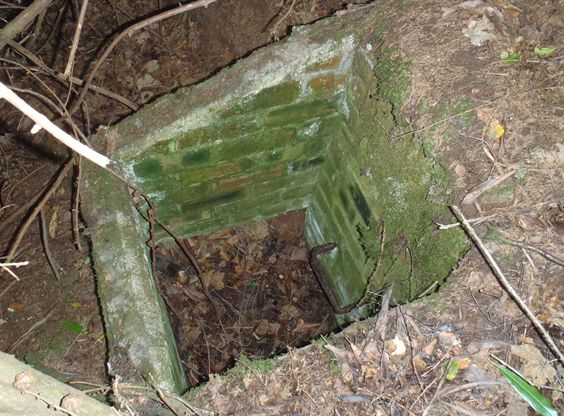 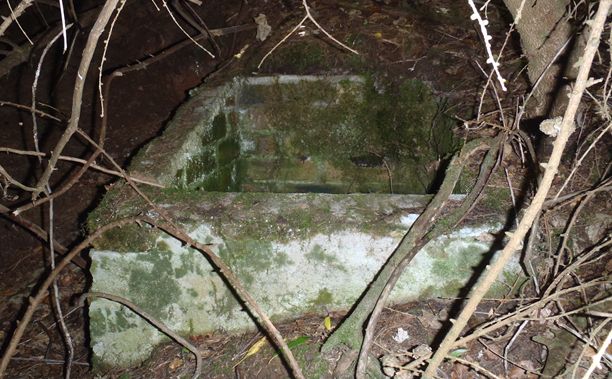 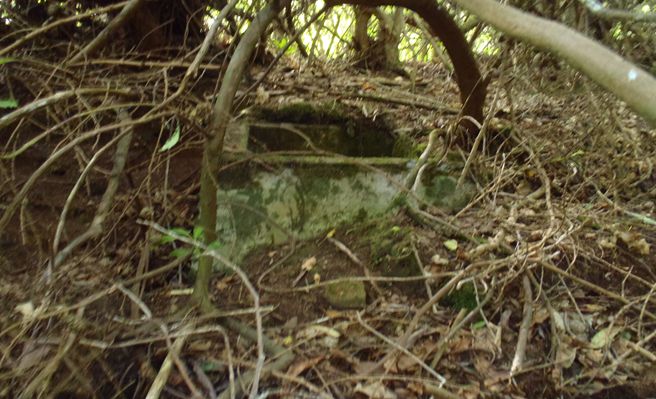 Caption & credit
Another view of the shaft amongst the undergrowth
OB Status
Collapsed with some visible remains
OB accessibility
This OB is on private land. Please do not be tempted to trespass to see it
Location

The main transport targets would have included the main roads through Duns and Lintmill Sidings. These railway lines served RAF Charterhall nearby which could itself have been a target.

The Patrol did training in the grounds of a large house on the Earlston to St. Boswells road. Some training at Polworth village hall. They also used Oxendean quarry for explosives and small arms training.

The Patrol Sergeant may have gone to Coleshill House for specialist training.

Weapons and Equipment
Other information

Patrol member Bill Watson wrote and published a book about the Patrol and the fictional account of the Germans invading called "Gone to Ground".

Frank Richardson who took David Blair to the site.