Ferndown is a town 3 miles east of Wimborne.

Doug Gabe was the local Scoutmaster, very popular with the local lads who had suspected that he had been up to something during the war. A number of them found the bunker after the war and cleaned it up to act as their den, clearing the vents so they could light fires and cook inside.

It was Eddie Grubb and Charlie Hayter’s recollections of their time here that lead to the identification of the site once again. Over the years it had become known as the Air Raid shelter or “Big Mac”. Lisa Dancer saw the CART website and realised that the “Air Raid shelter” she knew from her childhood was rather bigger than any other she knew and rather too far from housing to be of much use in this regard and made the link between the two sites.

The OB was at Belle Vue, a section of woodland behind the Angel Inn.

There was a vertical entrance shaft with hatch cover and ring to open. Inside was a large (10 x 12 foot) main chamber with ventilation shafts. There was a 25 foot long escape tunnel with the exit hidden by trees and bushes behind a bank. After the war bits of the corrugated iron escape tunnel came to surface as children played in the wood.

In 2019, parts of the OB came to the surface again, revealing a large and deep cavity with evidence of internal collapse. It lay right below a regularly used footpath through the area, heavily used as a community resource by the surrounding housing estates. Because of concern that the main chamber might collapse beneath walkers, the site was excavated by Dorset Council, with support form CART.

Over several weekends the site was exposed, identifying the entrance shaft, with remains of the hatch mechanism matching drawings of a design specific to Dorset. The concrete counterweight was still in the shaft. The large main chamber had collapsed, with evidence that this had been done deliberately in the post-war era to prevent access. There was a small end chamber where the roof had remained intact until recent times, though part of the dividing wall had been dislodged by the workman who collapsed the OB. The escape tunnel led off from this end chamber to a low hatch shaft, which had been completely filled with concrete. Large parts of the extensive ventilation were also uncovered, with long runs of pipe heading away from the OB in multiple directions. Thanks to the use of  both magnetometry and ground penetrating radar, provided to CART by Gary Stearn, A new find was a cylindrical metal water tank identical to ones seen at both Langton Matravers and Beaminster. This could be filled from a disguised filler cap at the base of a tree with its own miniature hatch. A pipe ran into the entrance shaft allowing drinking water to be drawn from within the OB.

After recording, the site was backfilled, with the exception of a small section of the OB left exposed, though fenced off, with an interpretation board to remember the men who had served there.

One bonus of the excavation was the number of residents who came forward with information about the OB. Many had played in it as children, and one recalled reporting it to the Council when a hole was opened up in the roof. This had been filled in with concrete, presumably at the same time as the escape shaft.

We were also told that the Army Pioneers had approached a local farmer to ask to make a hole in his hedge to access the site. They brought in an Army lorry and set up a large anti-aircraft gun. In a technique reported elsewhere, the OB was dug under cover of this, filling the sandbags of the emplacement with the excavated soil, then these would be removed when the gun was removed leaving no trace of the OB being emplaced. It is likely that the Dorset Scout Section helped in the construction. 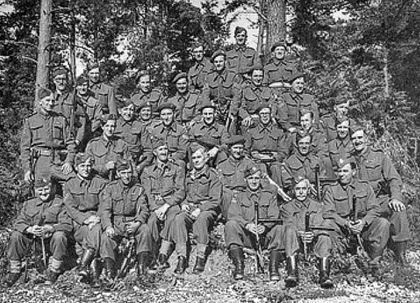 Caption & credit
The Wimborne group pictured at the end of the war, including the Ferndown men. Doug Gabe standing in glasses to the left, holding his Tommy gun.
OB Image 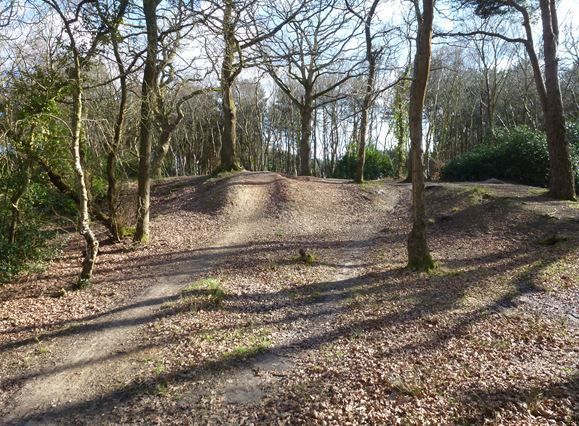 Caption & credit
The OB beneath this mound in what is now Poor Common Nature reserve. CART helped with excavations in 2019
OB Image 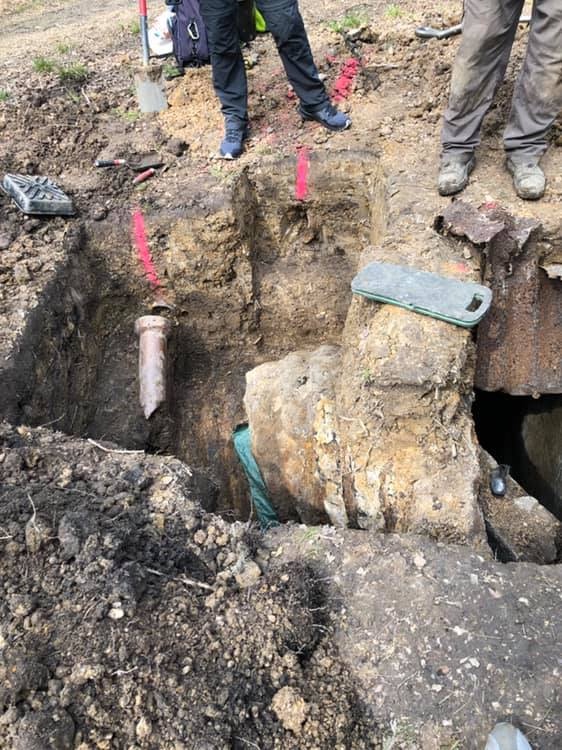 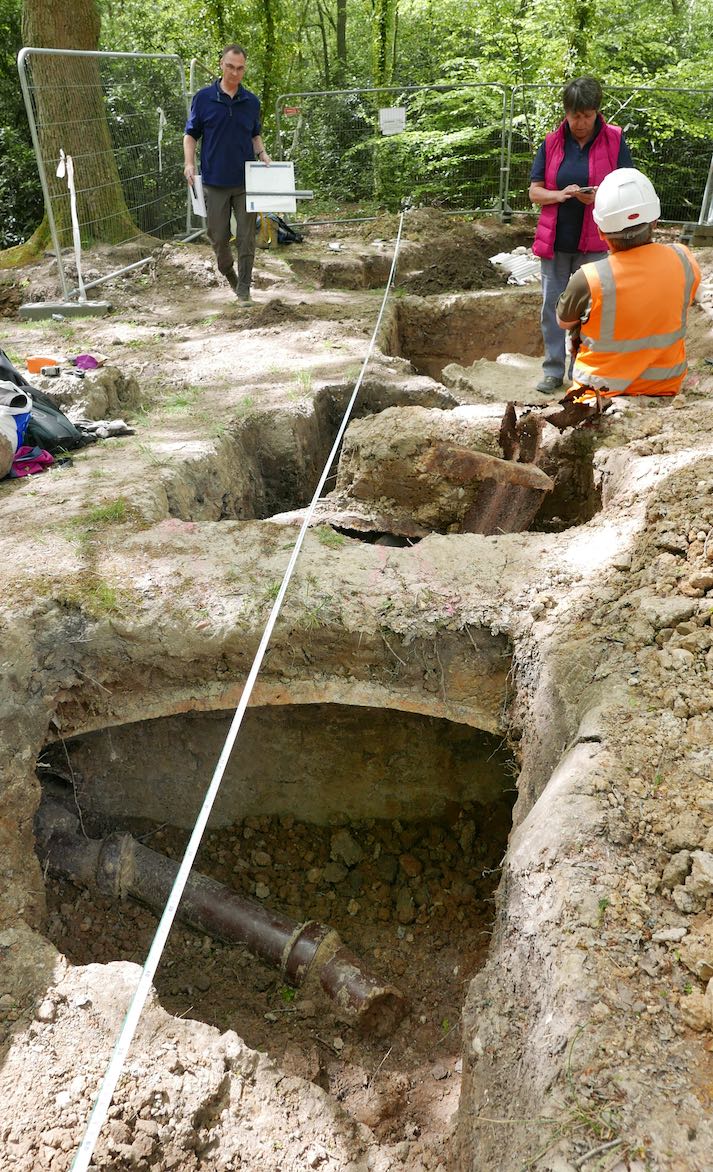 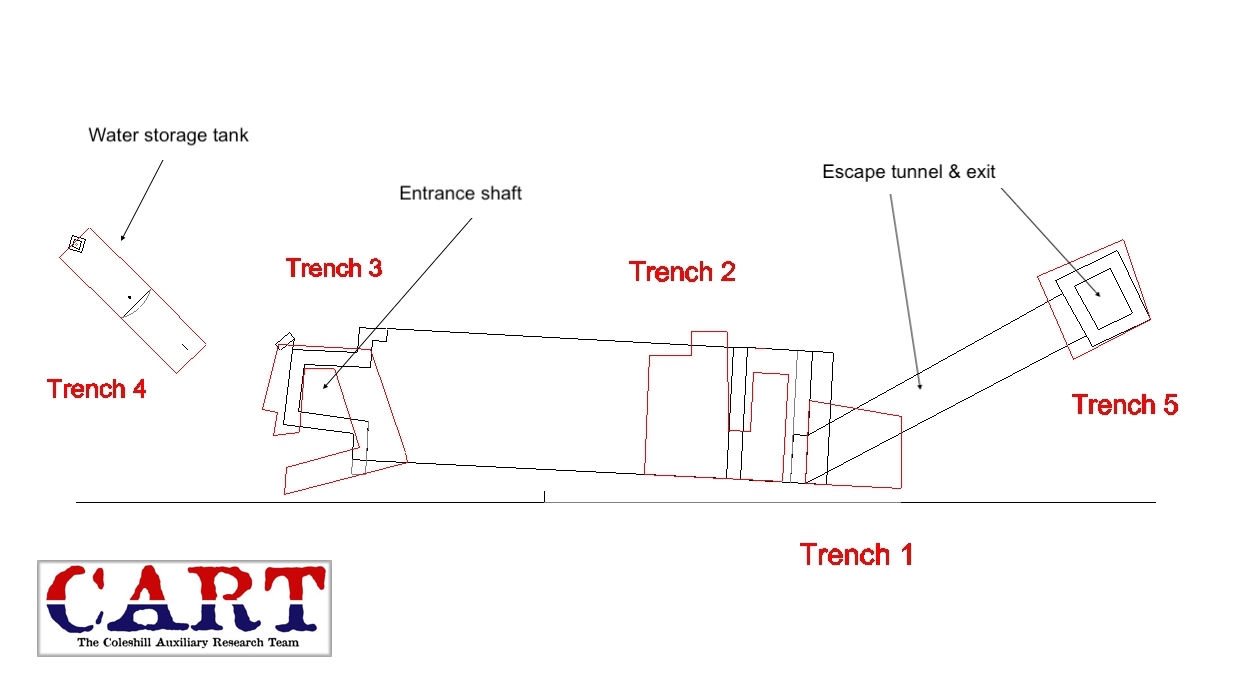 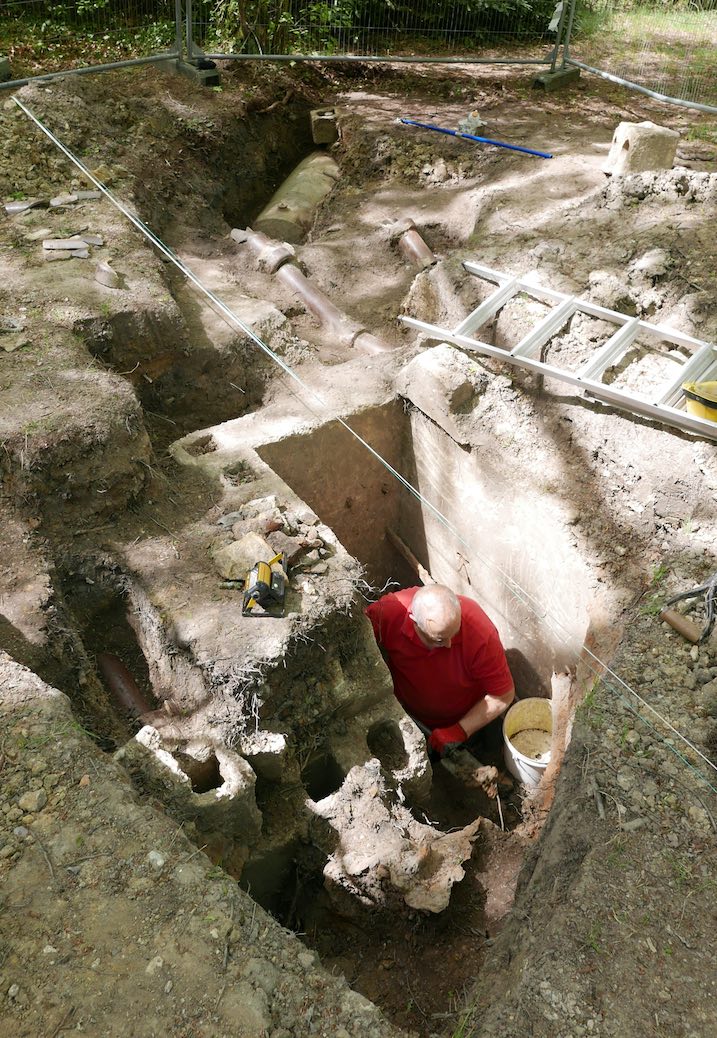 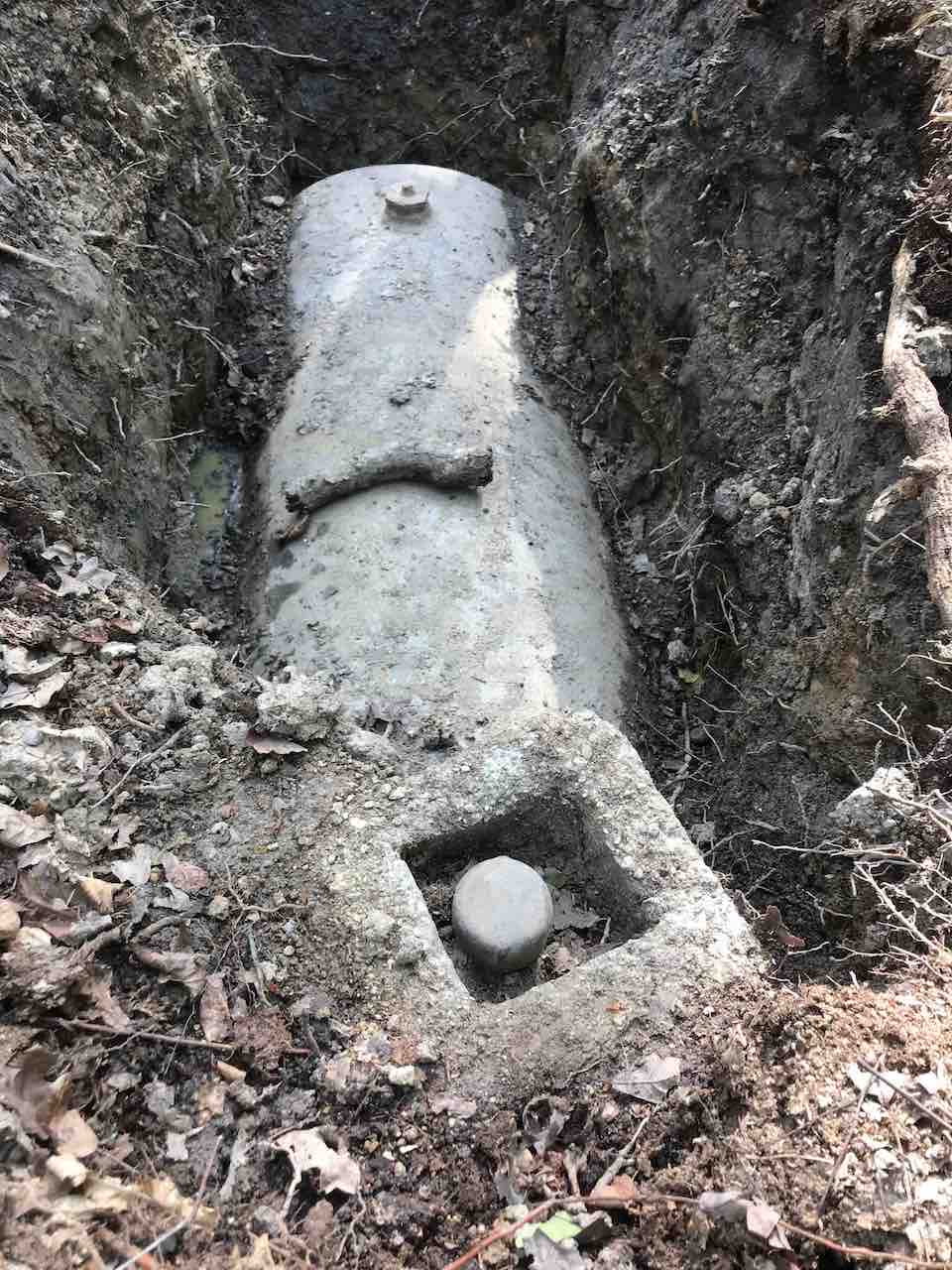 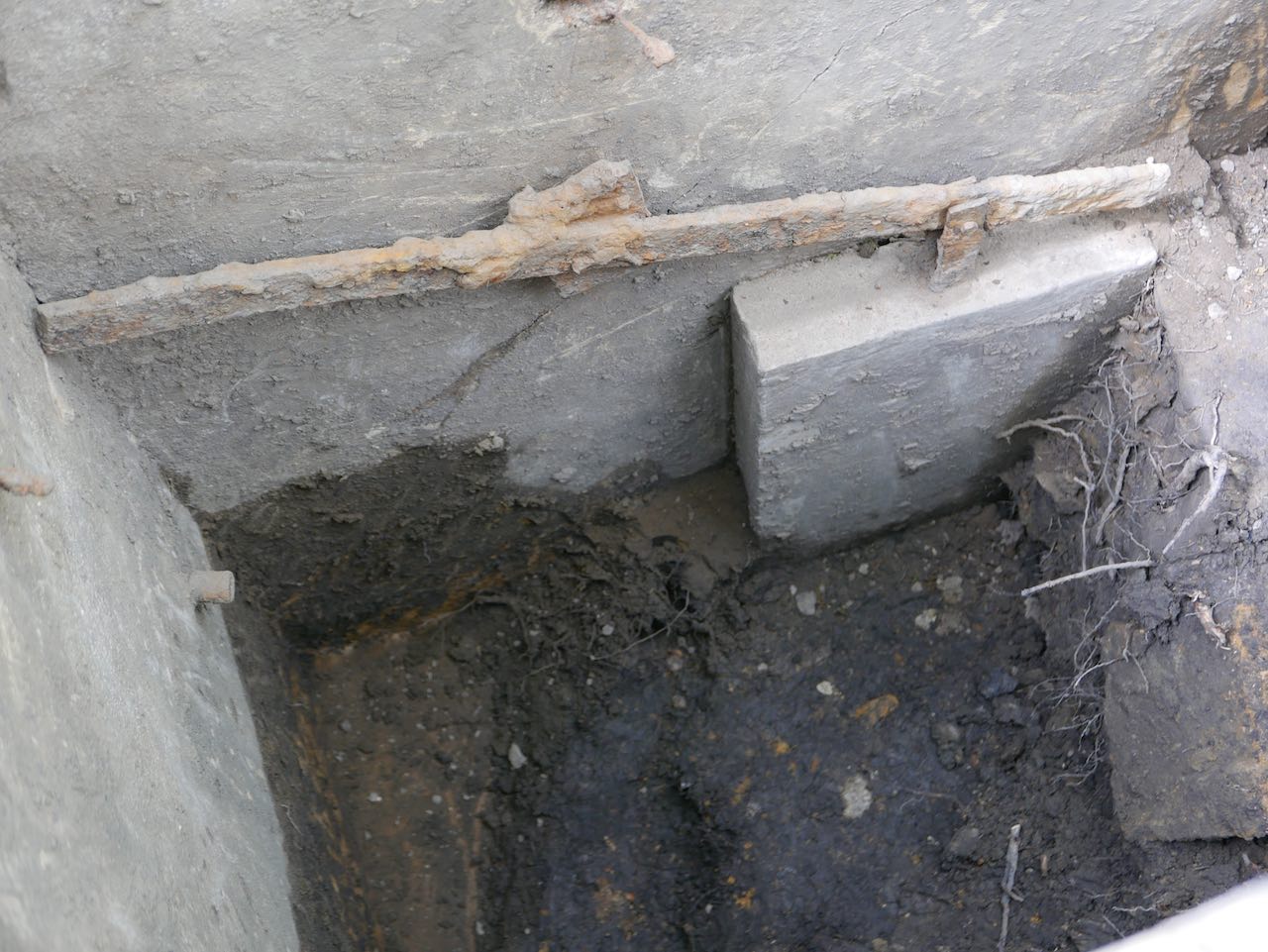 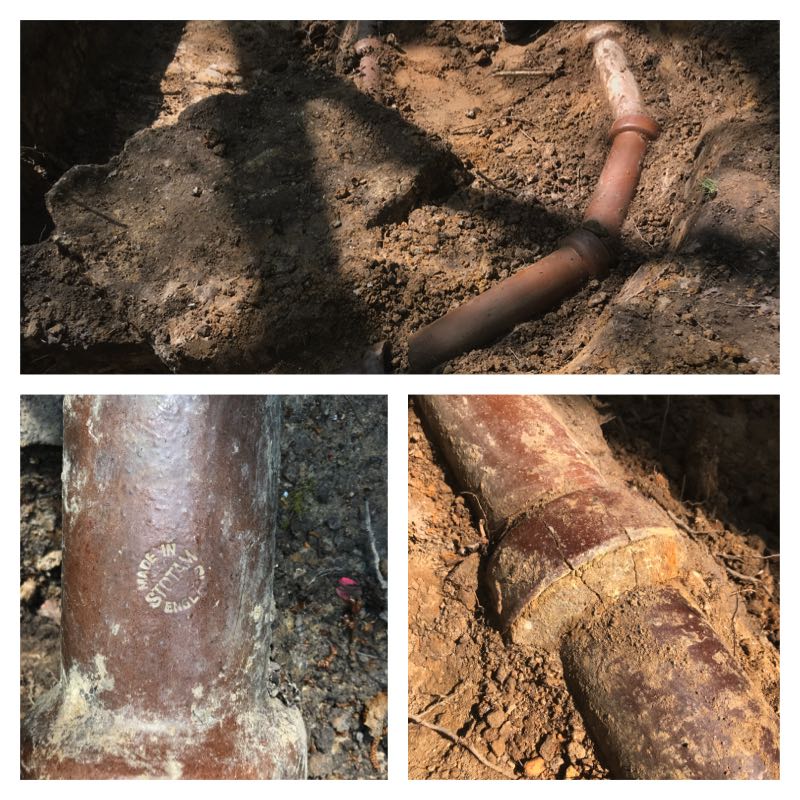 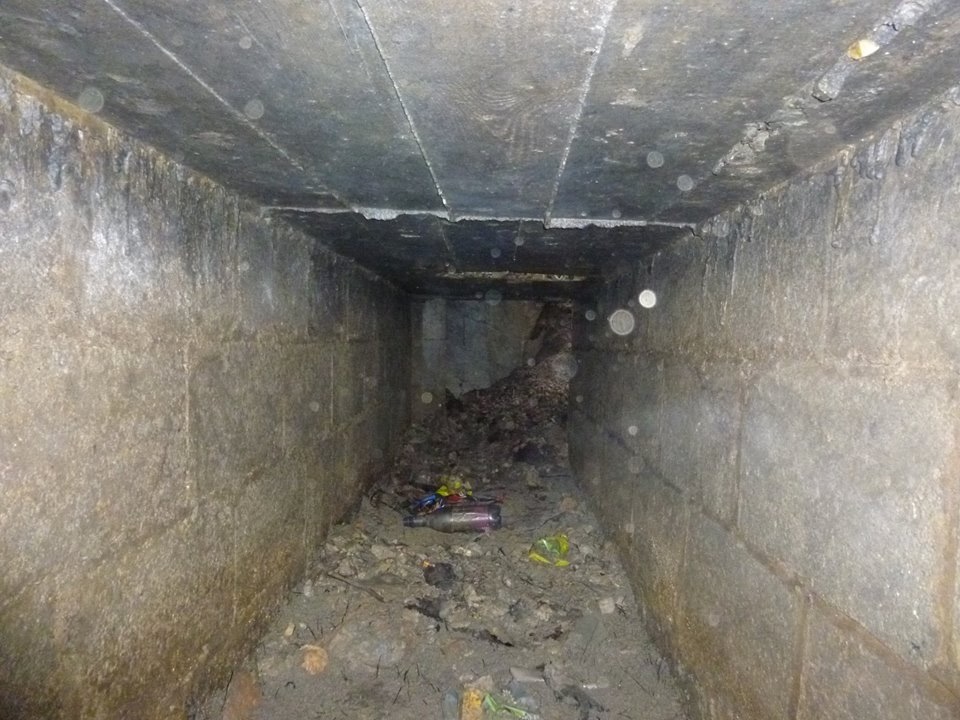 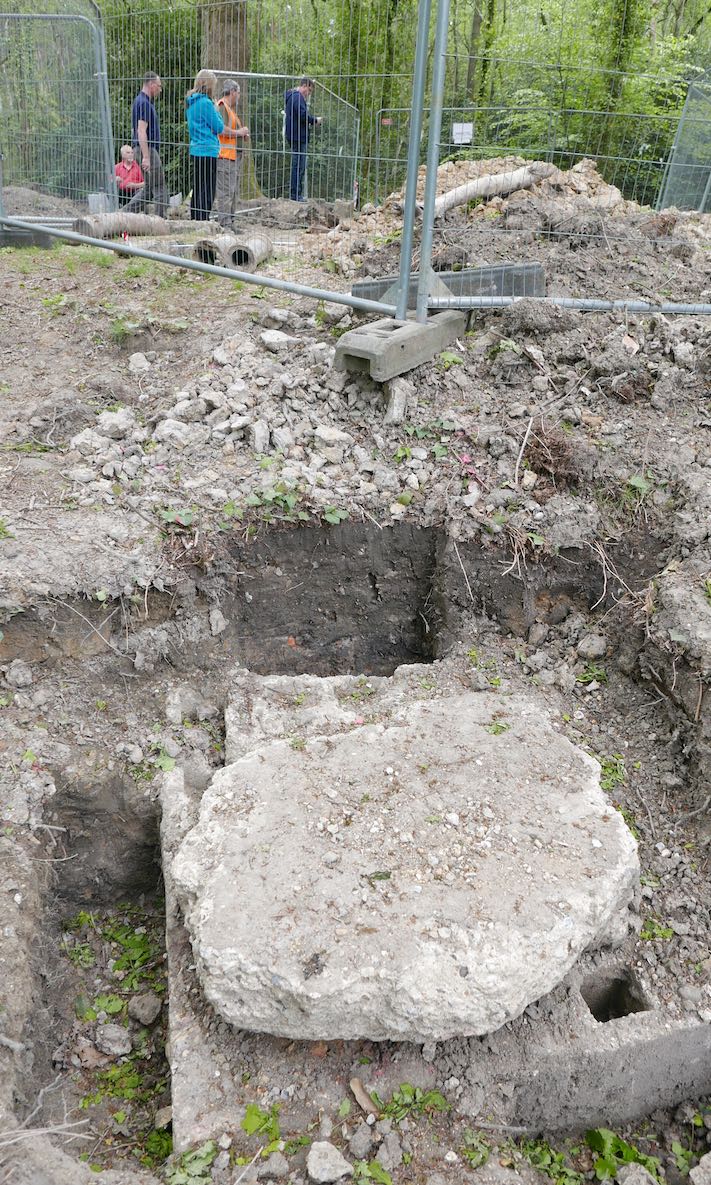 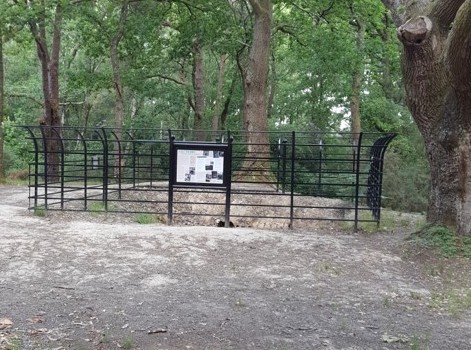 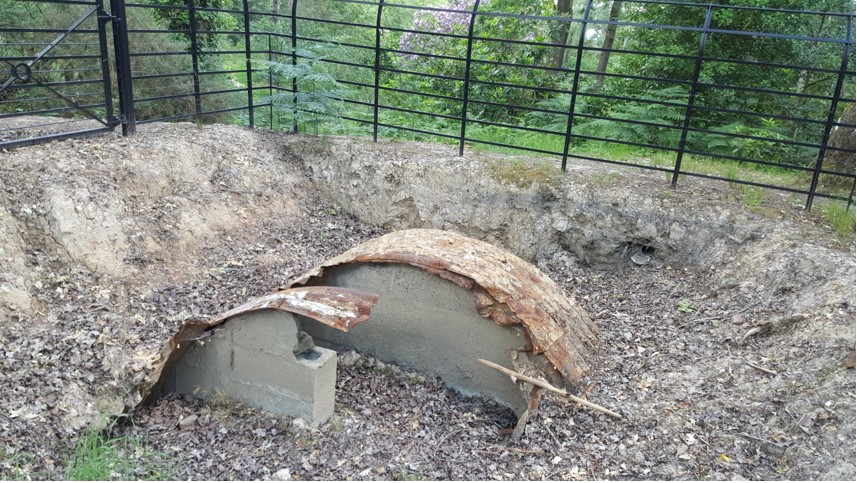 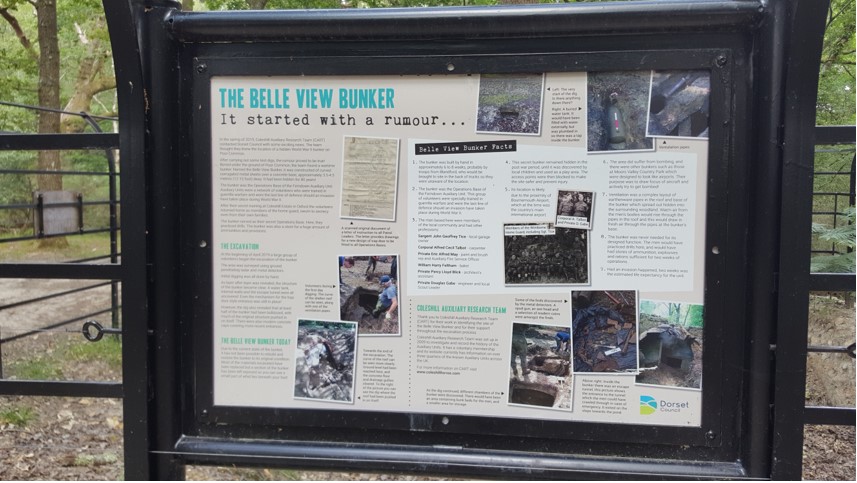 As a young lad, Charlie Hayter recalled five Home Guards turning up at Lion’s Holt where they were camping, with targets and two rifles. He and his friends were allowed to shoot at the targets they had brought, as one of the men was Mr Talbot, whose son was camping with them.

At the end of the war, Doug Gabe started the large celebration bonfire in Ferndown with an explosion. Presumably he had kept back one or two of his Aux Units “toys”.

Ferndown the back of beyond, Brian Davis, 1999