Halesworth is a small market town 7.5 miles west of Southwold.

The OB is situated on the edge of a disused gravel pit in the extensive gardens of a private property, Mill House, Holton and was accessed by permission of the owner.

The only remains are a slight depression in the ground and an intact emergency exit tunnel.

The OB had collapsed at sometime during the 1980s and was consequently filled in. Only a slight depression in the ground remains. The ground is covered by short-cropped grass and moss. A short length (30 cm approx.) of twisted iron stanchion marks the location. The emergency access tunnel is still in place and accessible for most of its length. One end is blocked by backfill originating from the collapse and consequent infill of the OB. The south-facing rectangular opening is framed by red bricks. The shaft was built into the slope of a disused gravel pit, running north/south. It is level and approximately 6 metres long and about one metre high. The walls are lined with corrugated iron. Breezeblocks, one on top of each other and bonded with cement support a roof of concrete slabs. A layer of soil conceals the tunnel roof on the outside.

The images showing the OB were taken before it was filled in the 1990s and are copyrighted to John Nichols, the owner of the property the OB site is located on. In the third picture a handprint can be seen on the wall behind the boy with the torch (at right) - presumably left by an Auxilier when they painted the interior roof of the chamber. You can see that it used to be painted off-white, many in Norfolk and Suffolk were.

The Patrol’s Observational Post was located about half way between the Mill House and The Cherry Tree Pub.

University of York and the Archaeology Data Service recorded the site in 1987 :

A sunken Nissen hut approached by means of a brick chimney some 12ft deep x 3ft x 3ft. It had a crawl-way escape tunnel and 4ins glazed pipe [air pipe?]. The chamber ran roughly N-S, with the brick chimney at the S end and the escape tunnel at the N end. The chamber was sunk into the top of a small cliff some 30ft high. The escape tunnel emerged some 12ft below the top of the cliff. The Nissen hut is of poorly galvanised iron on a concrete plinth with brick ends. Chimney is of brick with iron pipes across one corner to form a ladder. Escape tunnel is roofed with paving slabs, the sides concrete blocks, and the floor concrete. with sketch drawing on form. The hut was corroded and collapsed 1980-1990. The hurricane of 1987 brought down 115 trees in Mill House grounds, the worst damage being done on the bank where the Nissen hut was. As the roof had largely caved in, the recorder (landowner) had the site of the Nissen hut filled in and the top four courses of the chimney broken down. Only the escape tunnel now survives. Photographs were taken and sent to Halesworth Museum [not acknowledged]. 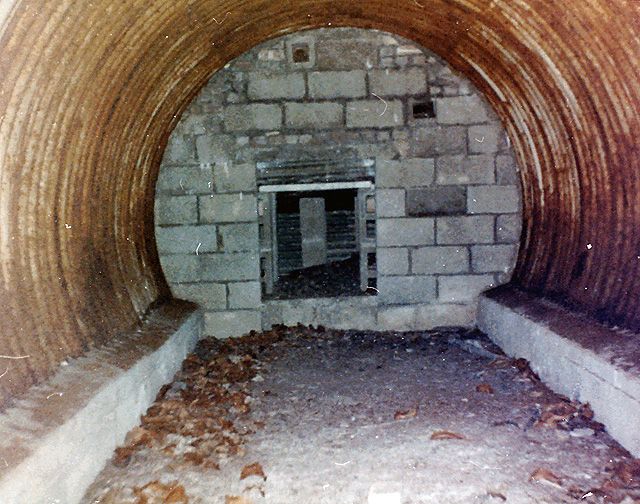 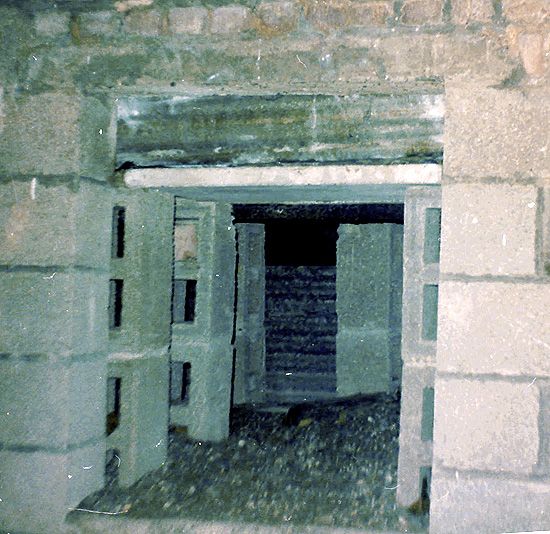 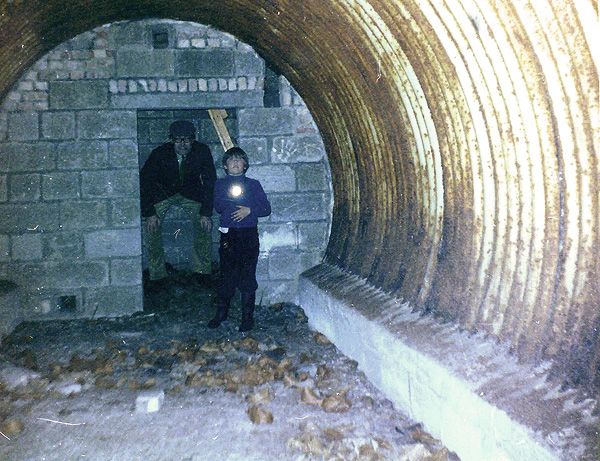 Caption & credit
Images taken before the OB was filled in (in the 1990s) John Nichols. Note the hand print on the wall
OB Image 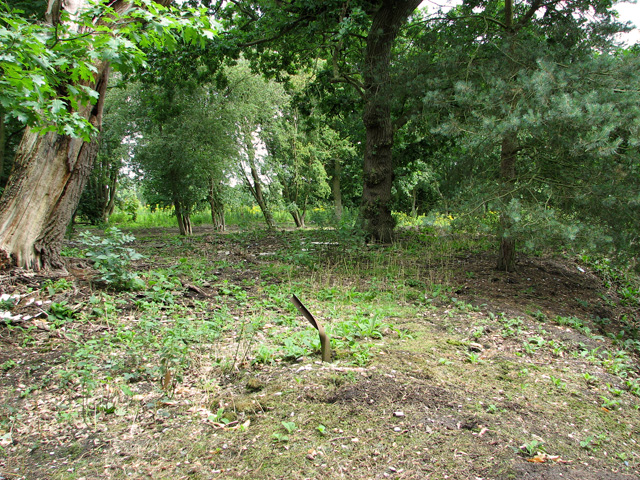 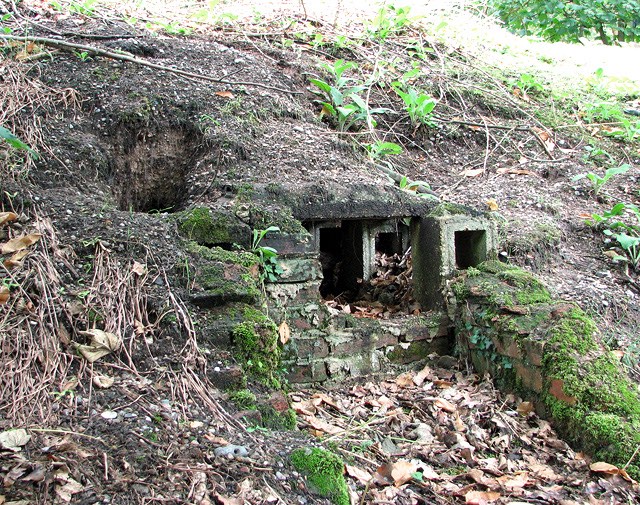 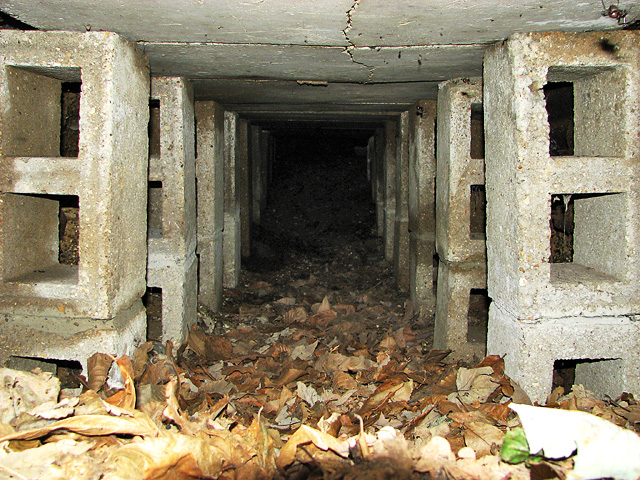 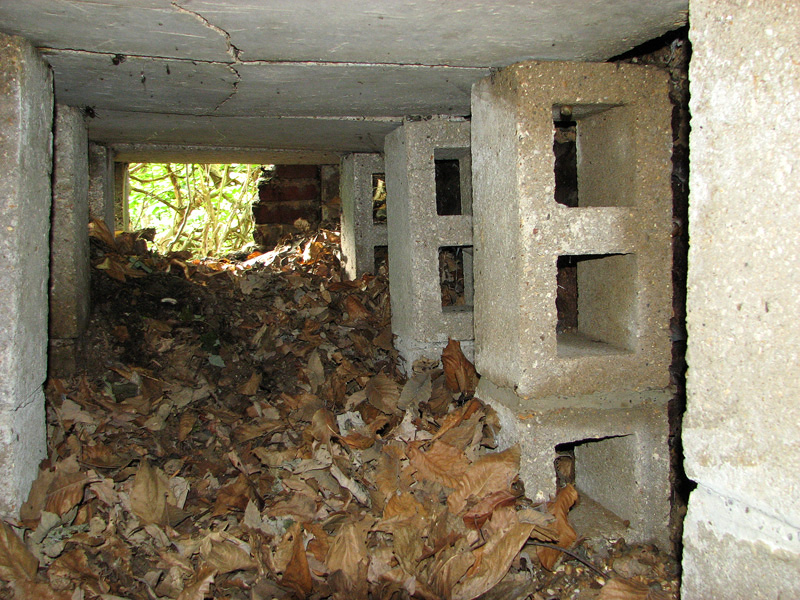 Caption & credit
Halesworth Emergency exit view towards opening
OB Status
Collapsed with few visible remains
OB accessibility
This OB is on private land. Please do not be tempted to trespass to see it
Location

Auxilier Anthony Harrison: “I became a member of a group in 202 Battalion in 1942 based at Halesworth. There were six of us and I served until I was called up in 1944. I still have my copy of the ‘1938 Calendar’, which was our instruction manual on the use of various booby traps, time delay pencils, explosive charges and their fuses, anti personnel devices, etc. Our concrete underground bunker was near the windmill at Holton. We had a variety of weapons including Sten guns, .38 revolvers, Thompson machine guns and rifles. I remember doing exercises, and on one occasion we were taken to somewhere near Woodbridge, where we had to practise blowing up trees in the grounds of a country house. We had gelignite but also were given some of the new plastic explosive. We were trained in a variety of skills such as shooting, sabotage, unarmed combat, etc. I had signed the Official Secrets Act and my family knew nothing of my activities.”

“Suffolk’s Secret Army” by Geoff Dewing, “Standing Up to Hitler” by Adrian Hoare

The location was mentioned to us by Mr Edwards, Brampton, Suffolk. Recorded by John Nichols for University of York and the Archaeology Data Service.