Lovedean is a village approx. 1.5 miles north of Waterlooville.

It appears that the Patrol had at least 2 OBs. The first was built by the Army Engineers in woodland near Shutt's Copse. They cordoned off the surronding area whilke the work was ongoing. The entrance was concealed in bushes and the exit was into a disused and overgrown chalk pit. The exit was particularly well concealed with a hollow frame and door, which were filled with chalk and live vegetation to disguise it.

Unfortunately it seems the site was given away by an instruction to patrols to secure the escape exit. Some local boys noticed the padlock securing the exit aparently fixed to a chalk face and soon broke in. This appears to have been around 1941/2, and the OB was still stocked with stores. The boys removed explosives and a what is described as a Bren Gun (though these were not issued to Patrols) plus some ammunition. One of the boys passed the weapon on to an evacuee on a local farm, who lost three fingers, bringing the epsiode to the attention of the authorities. With the location compromised, it was emptied and the site blown up, leaving a huge hole.

The second OB was located between Old Mill Lane and Hinton Manor Lane, near Whitedells Copse. This was built in plain sight by the Army, who announced they were putting in a water tank or drain, with the entrances kept secret.

It is constructed from a corrugated iron Elephant shelter on a concrete base. The end walls and blast walls are brick built.The escape tunnel is constructed from a wooden square frame lined with corrugated iron which exits from a brick built alcove, in the corner of the OB, with a concrete capped roof and floor. The entrance area / chamber has collapsed but the main chamber is intact.

Later in the war, one of the same group of boys who had raided the first OB was visiting the the second, which they had located a while before, but as the started to open the hessian curtain at the entrance, a candle was blown out inside. They rushed off and returned with a shotgun armed farmer, to discover an Italian Prisoner of War, with a large orange circle on his back, had been staying inside. He was arrested and returned to the Army

A third site was between the other two, and described as a "telecoms trench" and was dug as a trench covered over with some doors. It is unclear if this was an observation post of some type of store, or unrelated to Auxiliary Units. 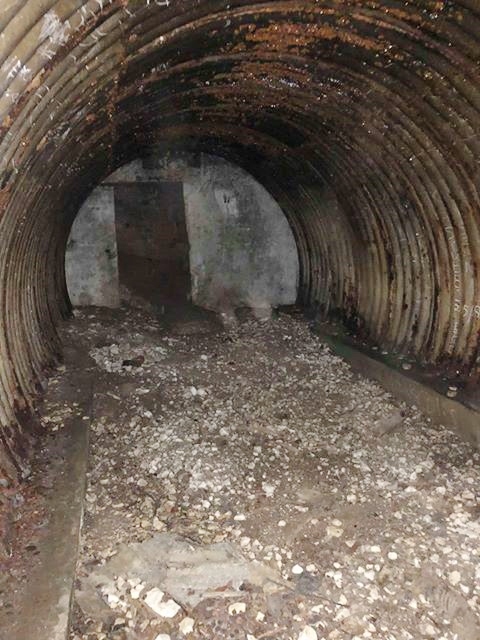 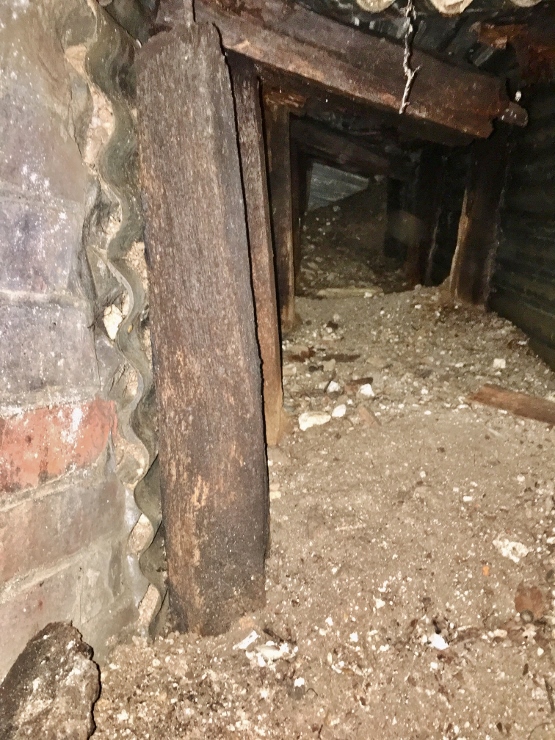 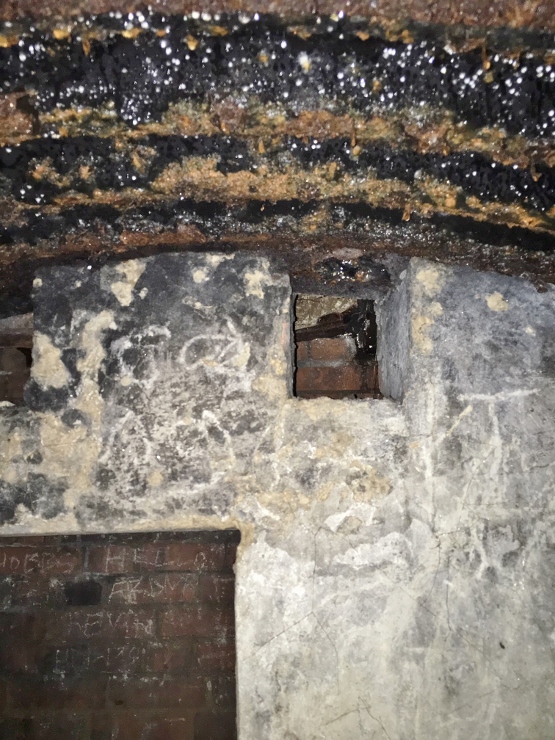 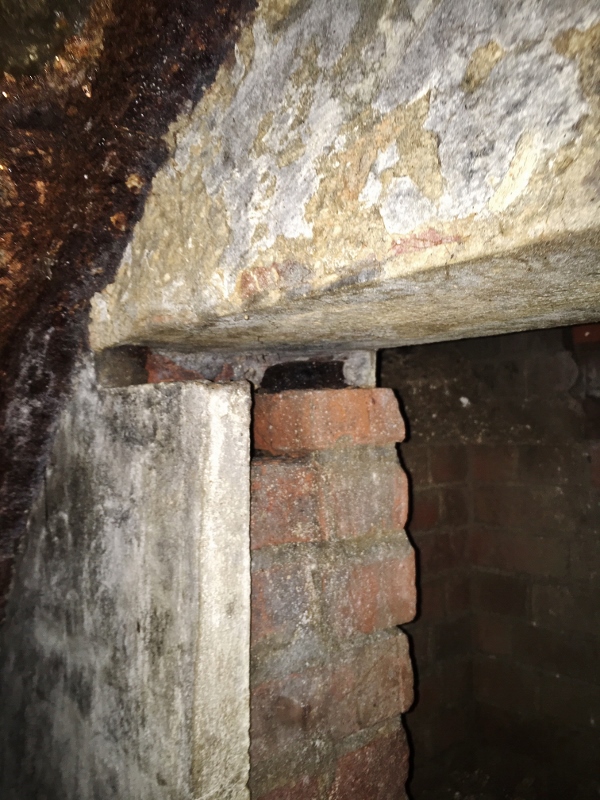 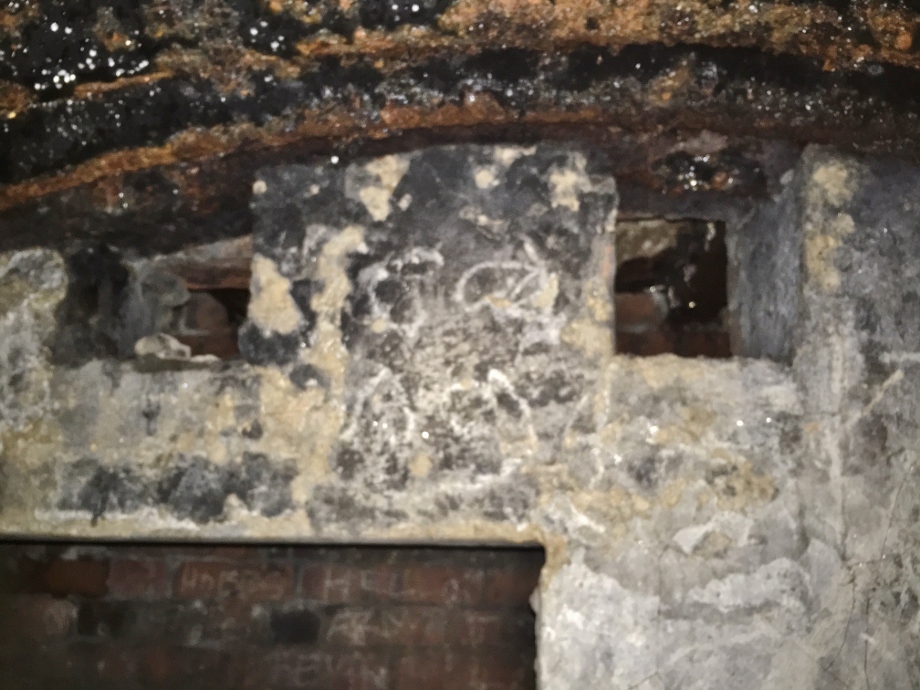 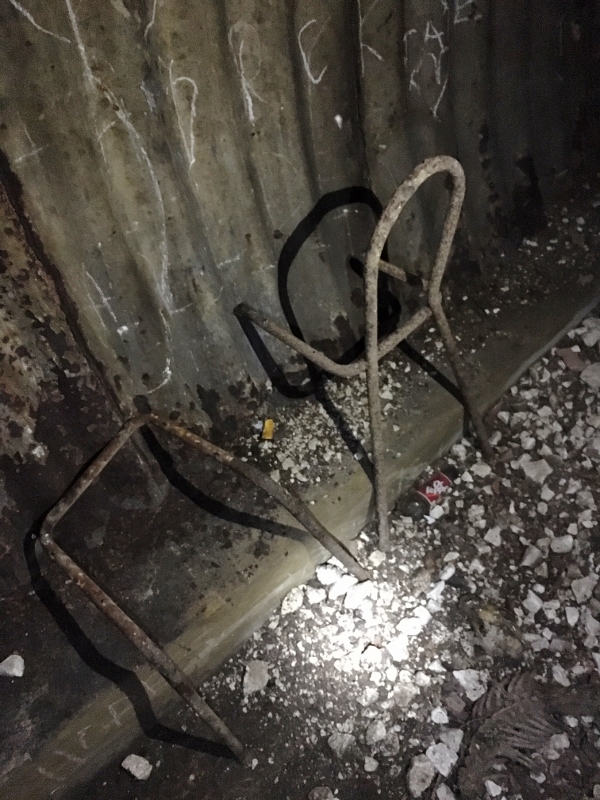 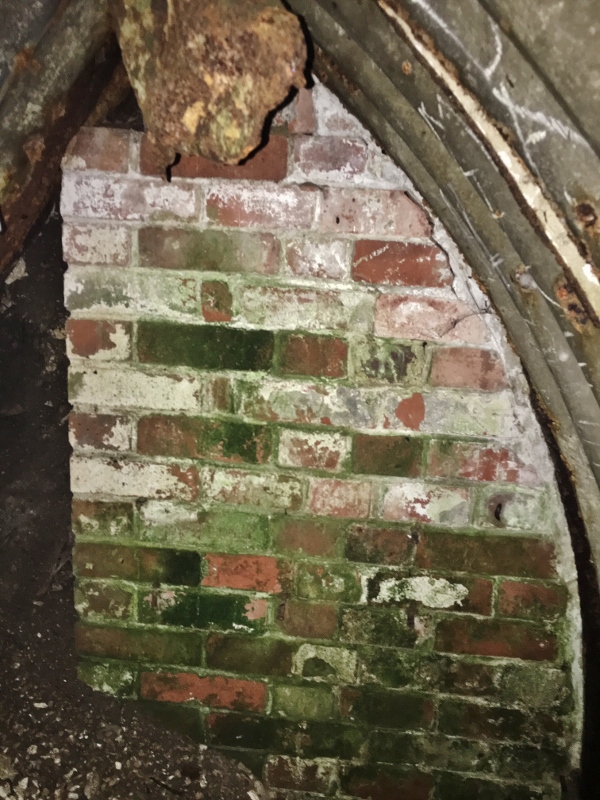 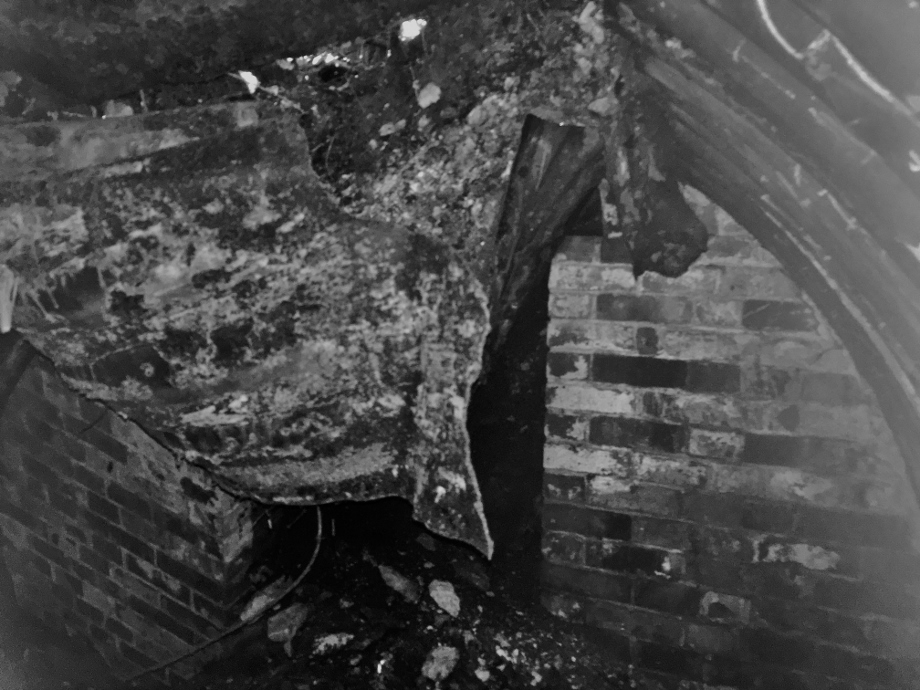 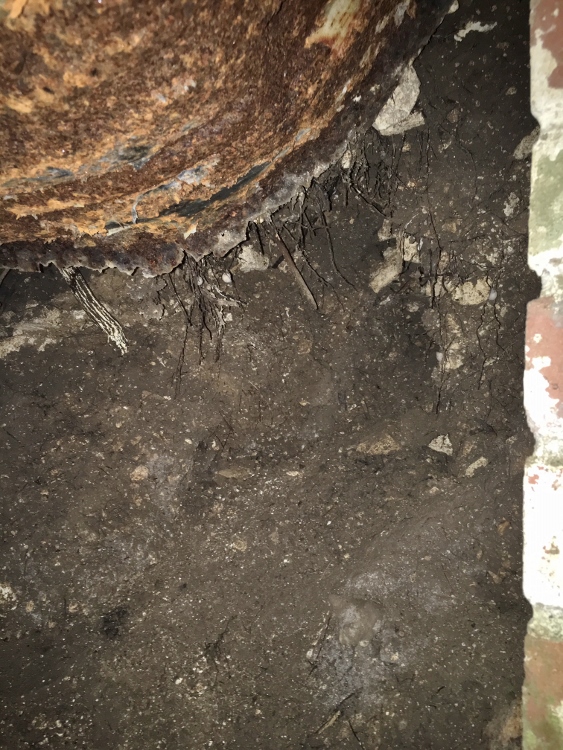 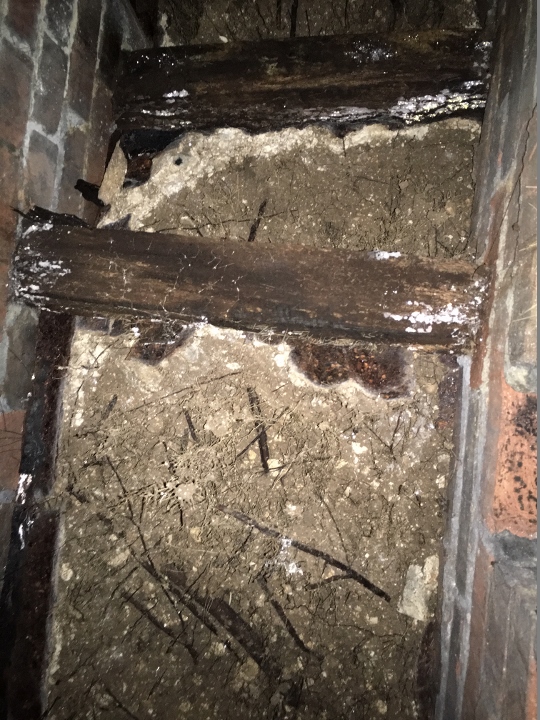 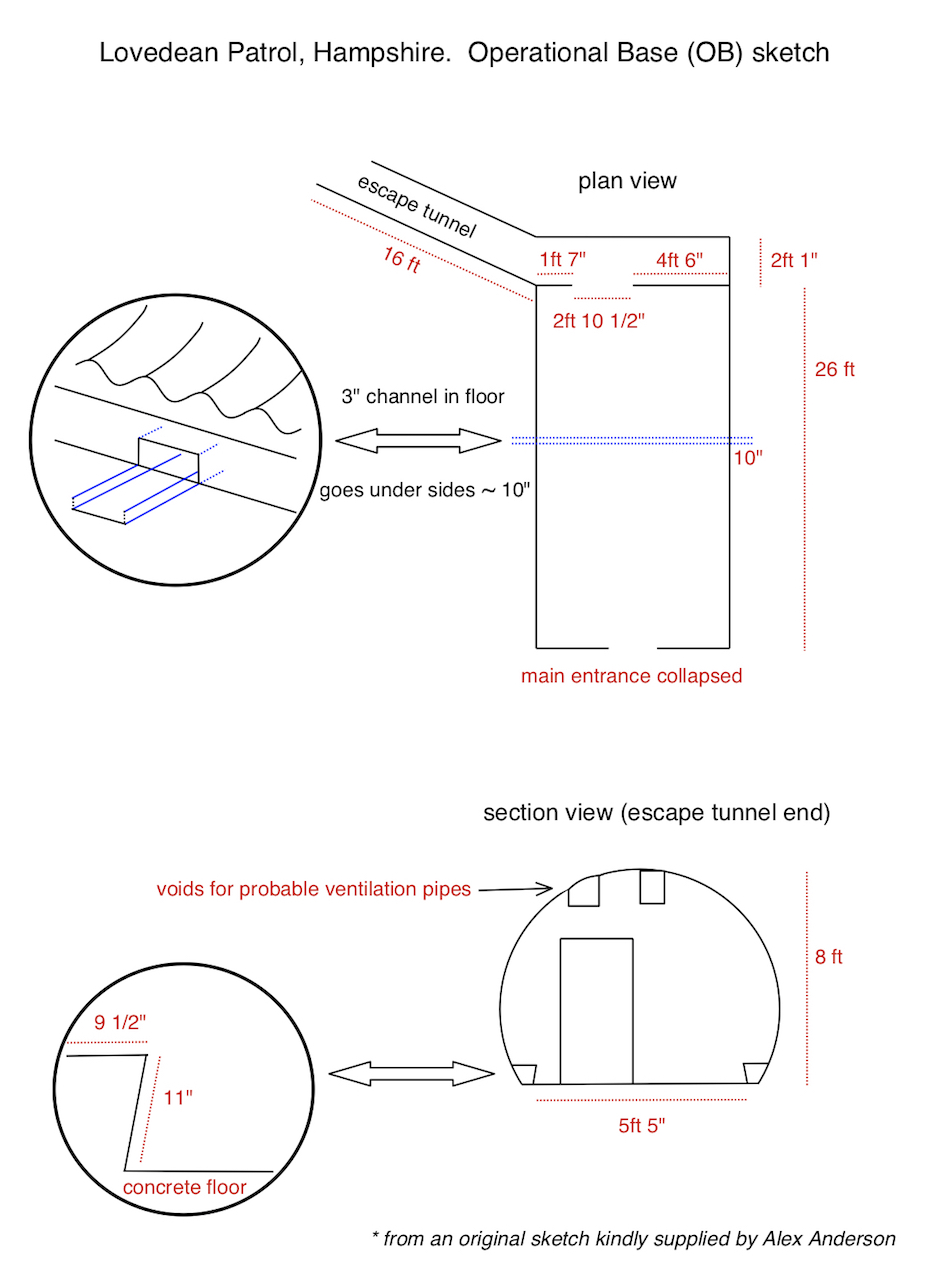 Caption & credit
Lovedean OB Diagram (from ALex Anderson & Martyn Allen)
OB Status
Largely intact
OB accessibility
This OB is on private land. Please do not be tempted to trespass to see it
Location