Newton Poppleford is a village on the main A3052 between Exeter and Sidmouth.

The highest ground in the area is open heathland so building the OB below the highest points gave the Patrol far better camouflage. Public lanes allowed the Auxiliers very easy access from their homes to the OB attracting very little attention.

The OB is located on the edge of a thinly planted Hazel copse. The nearby bank and hedge contains larger and more mature trees.

The entrance shaft drops down to a small passage with a small alcove or chamber leading off to the right. At only 3 foot by 2 foot it could have been a storage or toilet area. The floor then drops down 3 foot into the main chamber. Two wooden lintels support the passage roof as it steps down and the concrete block between has been rounded off to a smooth curve. The Auxiliers must have learnt that this was a place to constantly bang a head against !

The main chamber is approximatively 15 foot by 8 foot. A concrete floor supported a 9 inch block surround topped with wood. Fixed to this is the curved Nissen structure creating the main chamber. Four ventilation pipes meet in a square at the highest point in the ceiling and there are various ventilation pipes within the concrete block end walls. There is also at least two soakaways in the floor.

Two half height block walls are present at the far end of the chamber separating off the last 3 foot. These do not appear to ever have been full height and one has been partially knocked down post war. At the far end, the wall has what appears to be a blocked in exit where a wire enters the chamber. The wire leading from the wooden lintel on the far end wall of the OB could have been used to communicate with an Observation Post located near the bank surrounding the copse which has yet to be found. This would have allowed observation of the main coast road and almost to the shoreline.

Some people appear to have used the OB to dump more modern day rubbish which is sad to see. There was however the wooden remains of what could have been a chair which may have been original to the OB.

A rectangular entrance shaft, approximately 2 foot by 2 ½ foot, built with concrete block and concrete lintel drops down approximately 7 foot. There is no evidence of any rungs or ladder so it is suspected this may have been removable.

At the opposing end of the OB to the entrance shaft is a matching square void in the block wall. A wooden lintel implies it was built as an entrance or exit. This has been blocked up and the work appears contemporary with the build of the OB. This may have meant to lead through to a second chamber and / or an escape route but for some reason the plan was altered during construction. This could have been due to the geology of the site or the lay of the land. This left the OB without an escape route.

At some time post war, someone has tried to search for further remains by knocking a hole in the in filled block work. This has only revealed natural infill behind implying no further structure was built. From the surface the OB is still completely concealed.

Alongside the entrance is metal detritus that could have been part of the hatch opening mechanism. Slightly further away is a water tank that again could have originated in the OB as there is no surrounding pasture land. 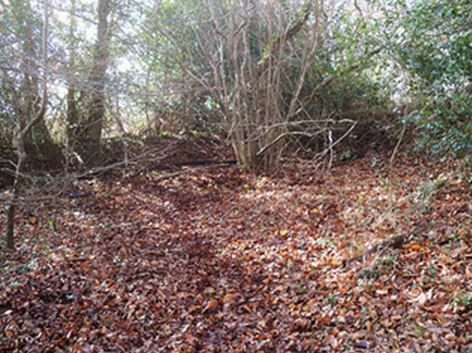 Caption & credit
Looking over the top of the OB. Entrance shaft concealed to left of Hazel coppiced tree.
OB Image 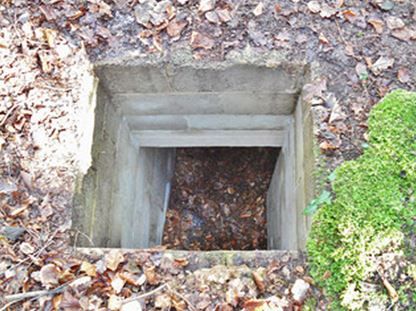 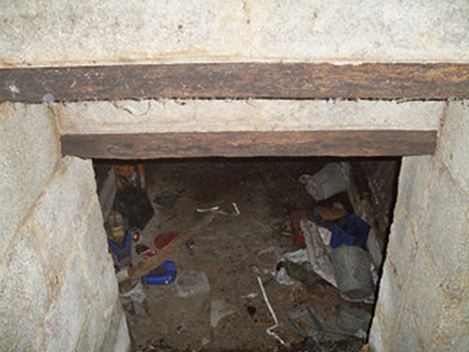 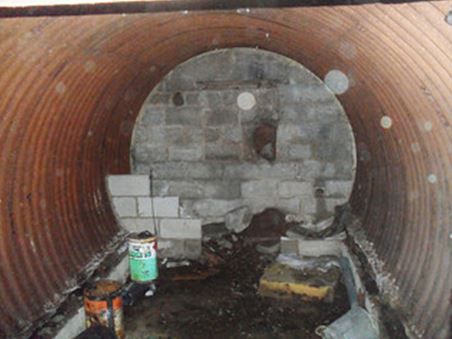 Caption & credit
The main body of the chamber
OB Image 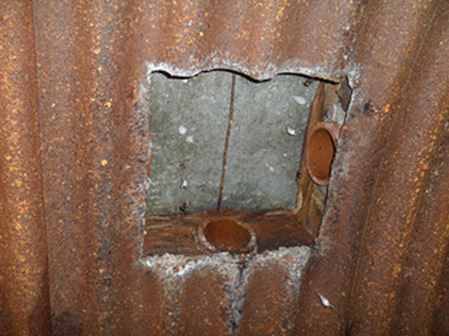 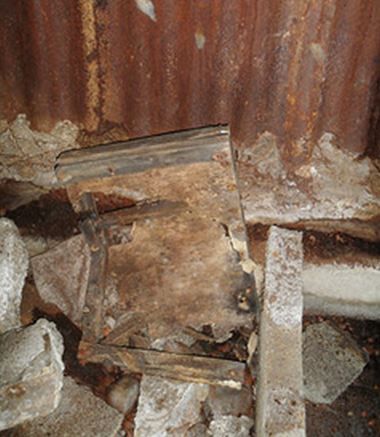 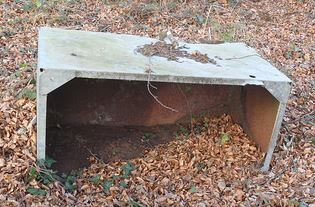 Caption & credit
View from the bank near the OB and an ideal place for an Observation Post.
OB Image 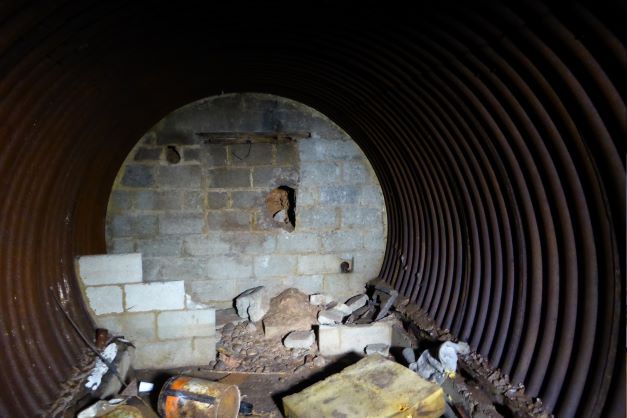 OB Status
Largely intact
OB accessibility
This OB is on private land. Please do not be tempted to trespass to see it
Location

In the 1940s Newton Poppleford stretched the then A35, the main road from the city of Exeter along the coast to Sidmouth. It is assumed this and the nearby railway line would have been important supply routes from the coast to Exeter and beyond.

Damage to bridges crossing the River Otter would have slowed progress from the coast.

Newton Poppleford is within easy travelling distance of Thorverton where the Devon Scout Section were based. They trained Auxiliers on weekend courses from all over Devon. The proximity may have meant that Newton Poppleford Patrol trained here quite regularly.

Around 1941 a tree fell in a storm blocking the main road through the village. The Patrol used some explosives to clear the road under the cover of darkness.

The wartime deception of a decoy airfield was constructed at the nearby Aylesbeare Common. This was intended to attract bombing raids aiming for the nearby Exeter airport.