Pelynt which is 4 miles northwest of Looe which is on the south coast of Cornwall.

The OB was in the corner of the triangular spinny pictured near to Trelawny Manor.

Assistant Group Commander 2nd Lieutenant William Mewton did reveal that he was once disturbed on a Sunday afternoon by an army officer who had been inspecting the OB's in the area. The officer, dressed in civvies, was not best pleased as all areas had done well apart from Pelynt who had built nothing. Mewton suggested a mistake had been made and took the irate officer to where the OB should be. Muttering that it was a poor show and a report would have to be made, the officer pointed to a tree and hedge marked on the map saying it should be there. Mewton told the officer to scrape away the leaves revealing a “only a rusty old piece of iron”. Encouraged by Mewton to pull at it, the officer discovered the OB entrance.

When intact it was a 10 foot by 10 foot Nissen type chamber that was 6ft underground. There was a chimney  ventilated through a tree and  a main drop down entrance. The escape tunnel exited through a hedge where an old farm harrow concealed it. 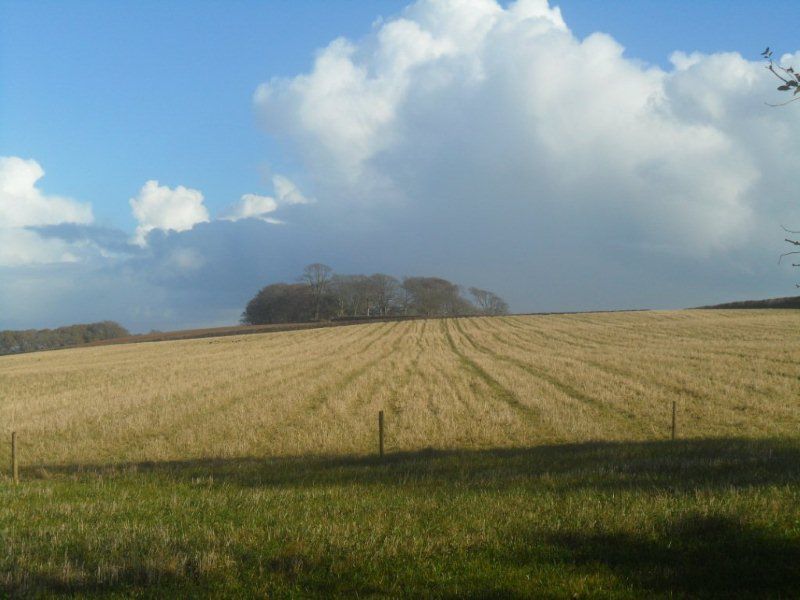 Caption & credit
OB was in this triangular spinny
OB Image 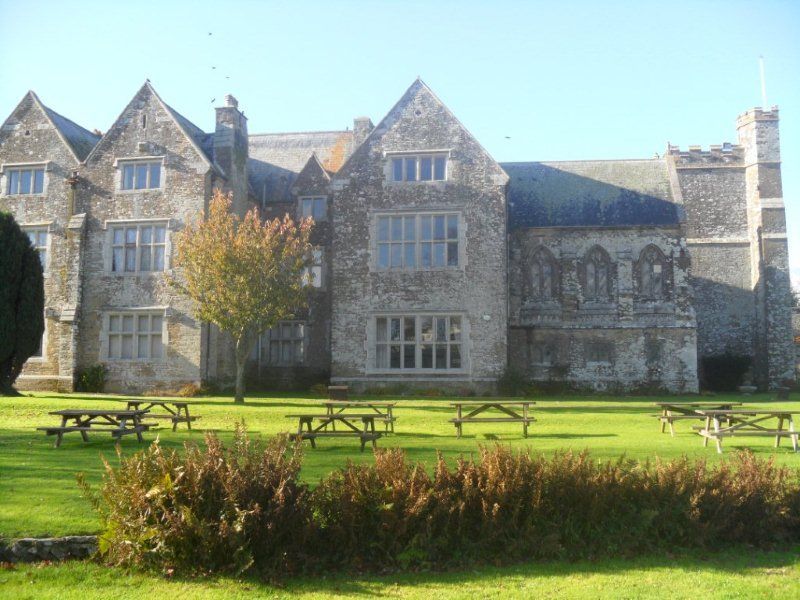 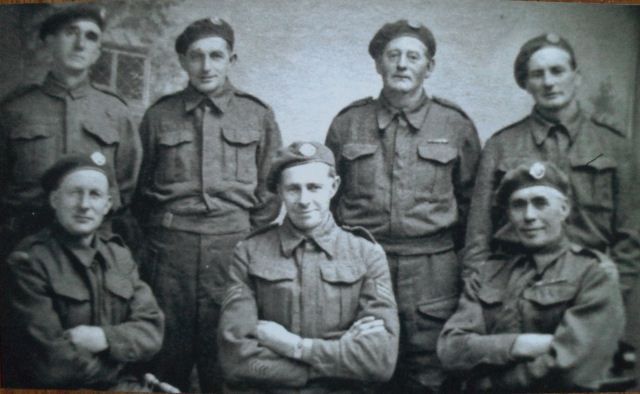 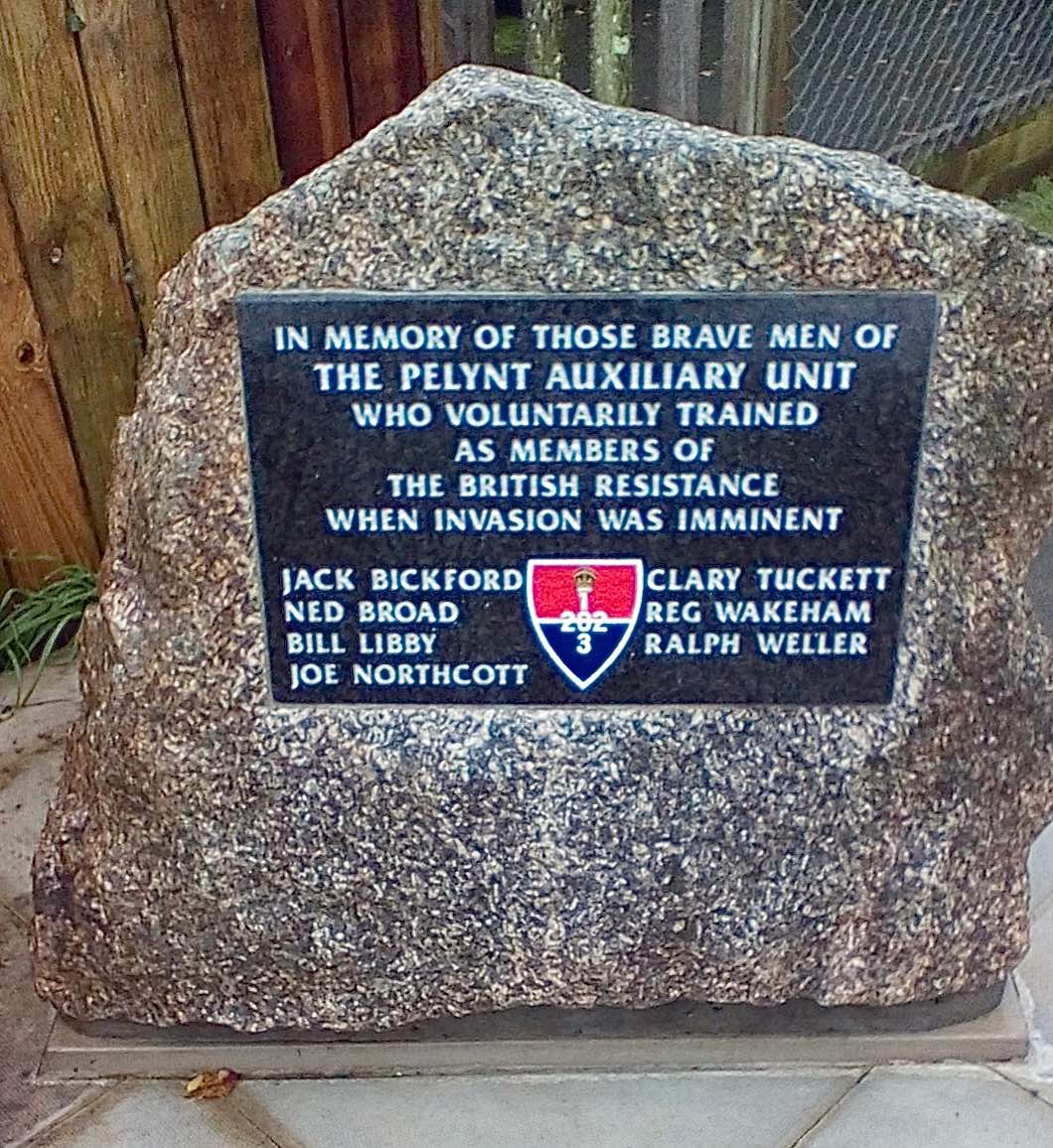 Assumed targets were bridges over the East and West Looe Rivers slowing progress from the coast to Liskeard.

The Patrol met up with an army lorry at an agreed venue with an army Major travelling in front. After several miles the Major jumped in with them and gave them orders that they had until midnight to complete. They were given a map that showed a small wood with a track that ran into fields and a nearby house that was guarded by six sentries. Their task was to get into the building without being seen or heard by “the enemy” and return to the army lorry. Posted around the area were observers, wearing easily seen dress, that were to be ignored unless the Patrol were caught in a booby trap or seen and therefore “killed” by the defending troops. No weapons were to be used. The Patrol studied the map in detail and decided to go a short distance into the wood and hide. They would then take it in turns to complete the task until one was successful. Joe Northcott was the first to try.

It was a cold, windy and dark night with the moon peeping out on occasions between the storm clouds. The Patrol waited in the woods in silence for more than an hour before Northcott returned, nodded, and the group silently made their way to the canvas covered lorry. Inside flasks of hot drink were soon being consumed as Northcott was the only one who wasn't extremely cold.

After some time they were joined by six men in denims, showing no rank, and then the Major. They had a short conversation in German before the Major turned to Jack Bickford telling him they had failed in their task as the guards had reported that no one had breached their defences and entered the house. Bickford looked to the quietly spoken Northcott to explain. Northcott explained his route as having gone along the track in the wood. By taking great care he was able to overcome a booby trap set across his path in the form of a wire hidden in the undergrowth about six inches above the ground closely followed by another one about four feet high. He left the wood and crossed two fields, keeping close to an overgrown hedge. Following the map he now entered an orchard, close to the target, where he was able to hear the guards talking. Taking off his shoes and heavy great coat, he crept close to the guards and waited for them to move on before he darted across the road and into the target building. He explained how he found himself in a room with damp army coats hung around a fire to dry.

At this point the irritated Major interjected demanding proof he had been in the house. Northcott was enjoying himself and was not going to be rushed by any army officer so he continued his explanation at his own pace. Collecting his boots and greatcoat he made his way over a gate, having spent time checking it for booby traps, and back into the woods returning to the rest of the Patrol. He did not mention that the imitation bomb, that he was meant to have left at the target, was still in his pocket.

The rain was now beating on the canvas of the lorry and the Major's patience was wearing thin, yelling, he demanded evidence. Northcott quietly produced an alarm clock he had taken from the mantel shelf. The guards were officers from Sandhurst that were being trained to operate at the front line. In the dressing down given to them by the Major he was heard to have told them to “improve their abilities”, for they had been “destroyed by a bunch of yokels”. The Major chose to travel back to Pelynt in the lorry with the Patrol, exchanging stories on the way, as like many of them, him had served in World War 1. They were all in their beds soon after midnight.

Hall Barton Farmhouse was used as a training place to break into along with the Jubilee Inn where the Patrol would often have a drink or two but would always leave the money for Landlords, the Nicholls.

The local Home Guard had their HQ in the disused Chapel on Sumer Lane. Joe Northcott was captured on an exercise with them but he was actually a decoy as Reg Wakeham was waiting to garotte them.

It is said that they refused Tommy guns and heavy weapons, believing that theirs would be a silent conflict. They spent much of their time learning the skills of unarmed combat and the use of knives. Joe Northcotte gave John Jolliffe's father a dozen garottes after the war which he used in his shop for cutting cheese.

In spring 2020 a memorial stone to the members of Pelynt Auxiliary Unit outside the village hall in an area especially prepared for it. See it here.

Mr John Joliffe. John has done a great amount of research into the local Patrol and has given many talks over the years along with writing a booklet on the local men to keep their names remembered and the Auxiliary Units story told to as many as possible.

Alwyn Harvey and his work on Defence of Britain.

The memories of Auxilier Ned Broad via his son.