Stratford St. Andrew is a small village just off the A12, 4.5 miles south-east of Framlingham.

The OB is situated on the edge of mature woodland. A patch of nettles can be seen where the ground was disturbed. Presumably the area where the entrance/exit collapsed.The OB remains semi intact. Curved corrugated sheets apparently set directly onto the ground, with flat corrugated sheets at both ends, forming the underground chamber. There is a small cave-like chamber, presumably used for storage, built into the south-west corner.

We observed a number of shallow depressions and rabbit burrows in the ground above. The structure is in good condition with only minor signs of corrosion. What appears to have been a passage adjoining at the north-eastern end has collapsed and exposed the upper edge of the curved roof as well as part of the entrance (or exit). It seems to have been blocked at sometime in the past by using the original corrugated sheets.

A small hole at the foot of a tree leads down into the chamber at its north-western end, and sandy soil is sliding into the chamber from here. This hole was in all probability created by burrowing rabbits and is too small for use as human access. We failed to find the original opening.

The entrance cover is described to have been a tray made from wood that was filled with soil for camouflage.

Both interior earthen end walls are stabilised/covered with corrugated iron sheets. There is an emergency exit passage with compartments for storage at the end of the main chamber, at a slight angle.

The materials used for constructing the OB were corrugated iron sheets and wood, we did not see any concrete or brickwork. A video clip made about 10 years ago shows that the curved roof of the main chamber is resting on concrete plinths. The chamber has since silted up, considerably raising the floor level and covering the plinths under layers of sand.

Herman Kindred, a member and at some time leader of the Stratford St Andrew Patrol, along with his brother Percy, described the OB as being situated in woods near Little Glemham Hall. It was about 14 ft long by 8 ft wide with fixed bunks that doubled as seats, and folding bunks above them. Entrance was through a trap door hidden in a bush and down a ladder. The toilet was behind the ladder and had its own ‘exhaust’ system. At the end of the main chamber, at a slight angle, there was a tunnel about 4ft 6 in height by 2ft 6 wide and 20ft long. In the tunnel there were compartments for stores.

Stratford St Andrew Patrol’s stores were kept in a passage that ran off the far end of their Operational Base. Herman Kindred explained: “In this tunnel we placed our stores. We kept our explosives in one compartment; in the next one would be food and water etc and probably paraffin oil as well. In the next one we kept our detonator equipment. It was a golden rule that detonators should never be kept anywhere near the explosives.” At the end of the tunnel there was a trap door concealed by a privet bush.

In his interesting account, which details how the location for their Operational Base was chosen and also how it was built, Herman Kindred recalled: “At the end of October 1940 the engineers (Royal Engineers) were ready to build out hideout. I rather objected to the location they had chosen because I thought if we dig down there we have a clay substance and we are going to have a big water problem here. They had another rethink and they asked me to have another look around the area and maybe make a suggestion as to where a better location could be found.”

The men did indeed find a more suitable location further towards the east and the Royal Engineers eventually selected the site that had been suggested to them by the Patrol members. They were also going to try to make good use of the nearby A12 road and build an Observation Post there. “They put our shell down and very well done it was. The work and all the camouflaging was very quickly done. I think they said that if anything happened, that if anybody asked what was going on, to say that an emergency food supply store was going to be put up for the village. That was the tale given out by the army at the time.”

The OB also had an Observation Post concealed at the edge of the wood by the A12. A periscope was used for observing.

It was built “right on top of the A12 road”, said Herman Kindred, at a very strategic point so they were able to see anybody coming from the east or the west, in both directions. The OP was connected to the hideout by field telephone for which they used ordinary fence wires to take on the current. In other words, the men joined the telephone wire to ordinary fence wire. They did not think that this would work but to their great amazement it worked extremely well.

Stephen Bayfield, son of the ex-gamekeeper on the estate, recalls having seen benches, shelving and some tins of food and tea on visiting the site after the war.

A pitched concrete counterweight with gas pipe pivots was found in the sand on occasion of their survey in 1998 by volunteers from B.R.O.M at Parham . This counterweight is now on display in the replica OB at B.R.O.M

Defence of Britain database has a record of the Observation Post which overlooked a bend in the A12 road. No traces remain. Record lodged (in 1996) by William Ward. 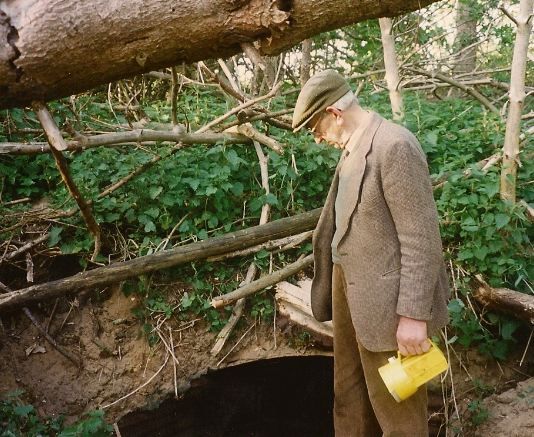 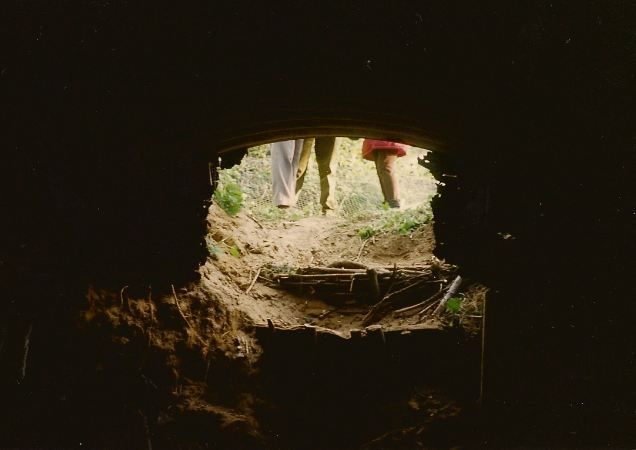 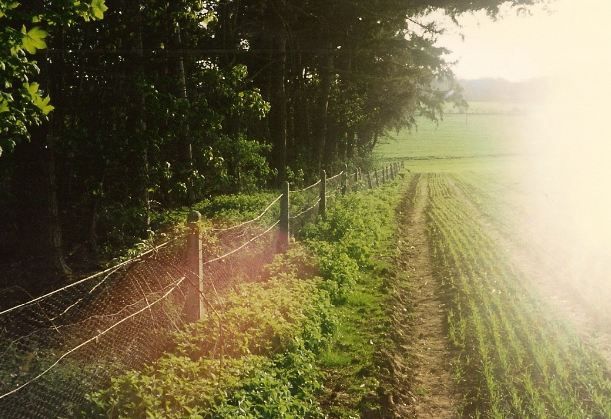 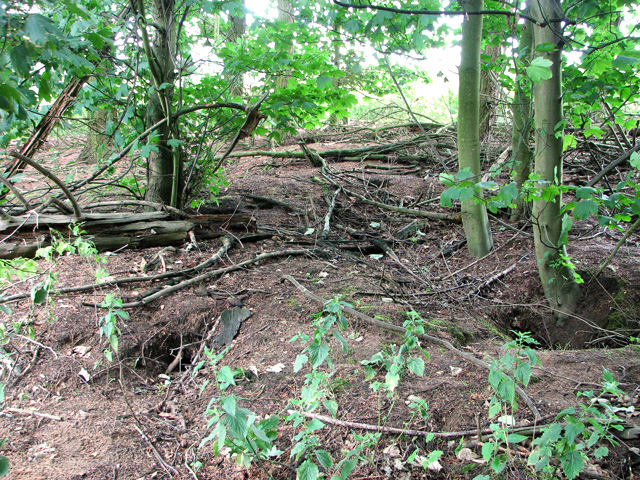 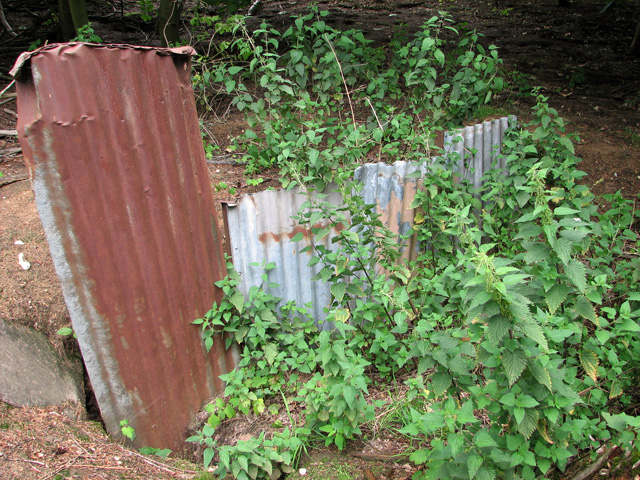 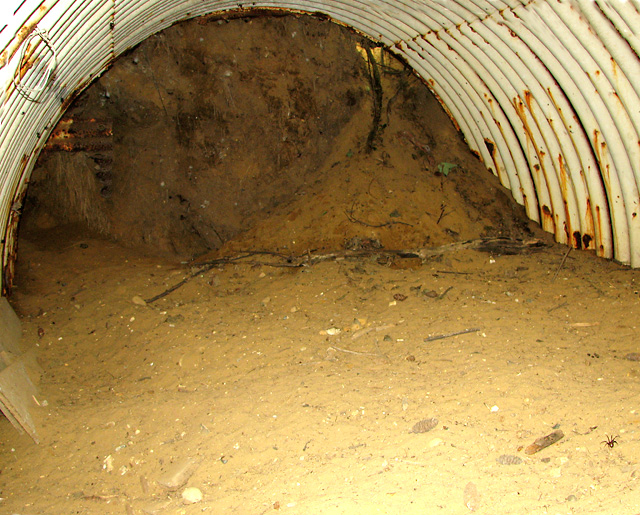 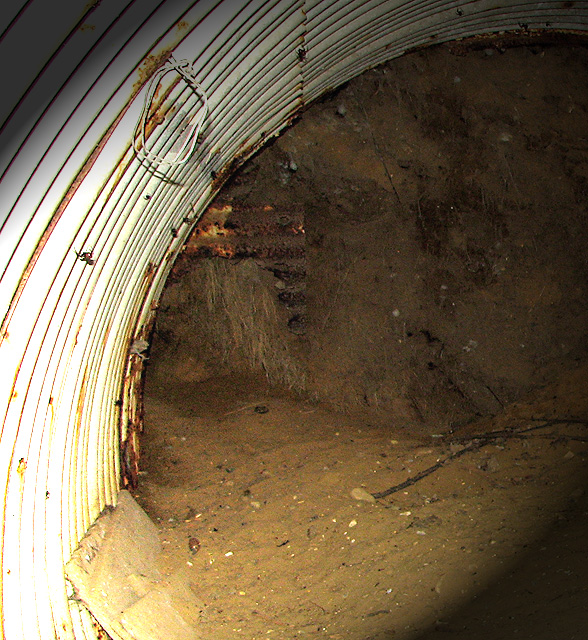 Caption & credit
There is a small cave-like chamber, presumably used for storage, built into the south-west corner
OB Image 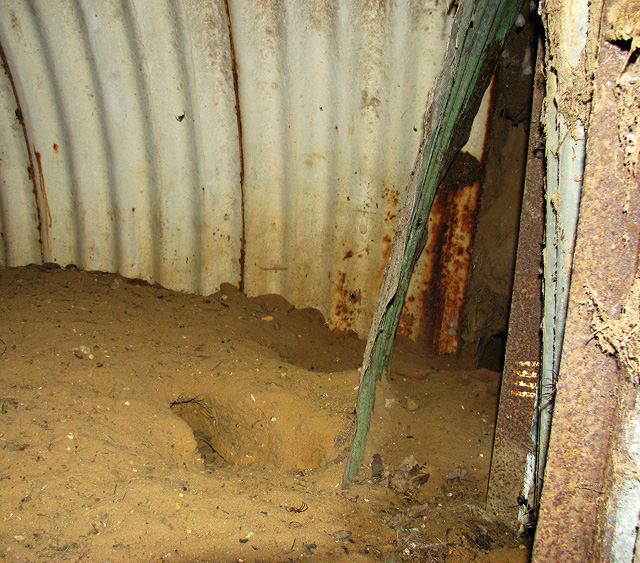 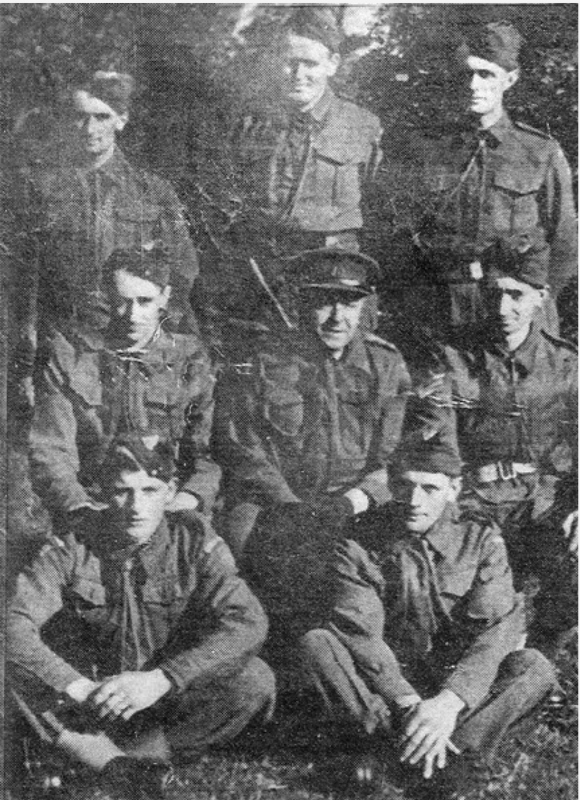 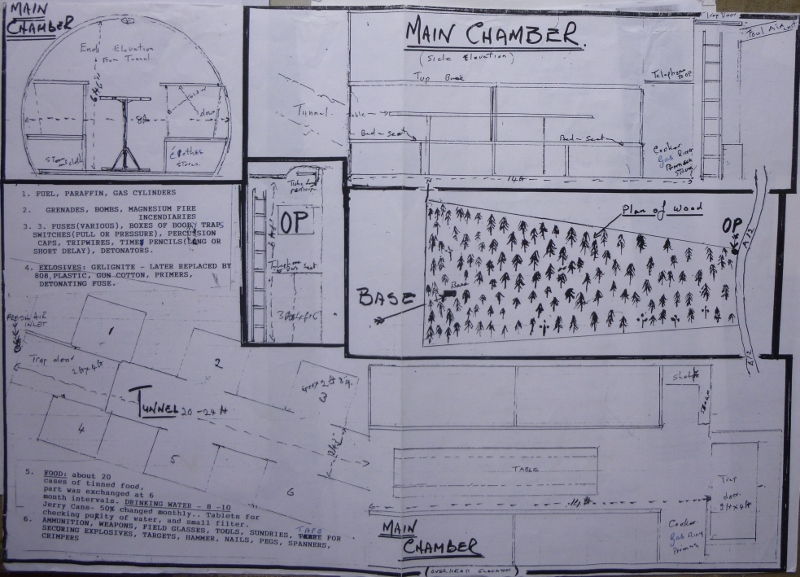 Caption & credit
Diagram of OB by Herman Kindred 1995
OB Status
Largely intact
OB accessibility
This OB is on private land. Please do not be tempted to trespass to see it
Location

The main target would have been Parham Airfield, now the home of British Resistance Organisation Museum. Herman Kindred recalled that, on Victory in Europe day, the Patrol waited until dark to set off an incendiary from the top of the water tower to attract the American's attention, then timed devices to rain sparks down.

The Patrol trained locally mostly at night. Some also went to Coleshill to train. The Patrol trained at Mill House, Cransford. One night, after going to Saxmundham, the Patrol stopped on the way home for fish and chips. Passes forgotten they were stopped by the Home Guard. They had to get the Commanding Officer to call Mill House before they could be released.

Herman Kindred interview below: (Permission has been given by Framlingham Sir Robert Hitcham's VEVA Primary School, along with the British Resistance Organisation Museum (BROM) at Parham).

Parham Airfield Museum has chit relating to the reduction in equipment heading towards stand down. The following were recorded to be collected from the OB by truck at 16.00 on 30 Jul 1944;

On occasion of a field visit in 1995, Dr William Ward reports that the OB was constructed from corrugated iron and wood, and comments that threats to the site are weather erosion and rabbit burrowing. Dr Ward’s report is lodged in the Defence of Britain database archives together with a colour photograph showing an interior view.

B.R.O.M volunteers accessed the site in 2001/2. Their findings, obtained on occasion of a survey of several OBs in the area, were used for the construction of a replica OB that would be easily accessible to visitors, on the site of the B.R.O Museum at Parham. A black and white photograph published in John Warwicker’s book “Britain in Mortal Danger” (2002) shows an interior view of the OB taken on this occasion.

The group photograph shows; front row men are Stanley Crane (left) and Arthur Whiting (right). Middle row is Herman Kindred (left) and his brother Percy on the right with Captain Moncrieff in the middle. Standing (left) is  Alfred Cable, shoulder to shoulder with Hector Wade (centre) with Alexander Dunnet to his left.