Warningcamp is a village in the Arun District of West Sussex, 1 mile from Arundel, on the east bank of the River Arun.

The structure had completely collapsed in on itself and been backfilled over the years by spoil and domestic rubbish, but the original escape tunnel was mostly intact.

An excavation to a depth of 3m below ground level was conducted over a period of five months by the Sussex Military History Society, resulting in enough data being collated from the remains to construct a 3D computer interpretation.

The vertical shaft seen on the left was the main entrance; the other box-structure connects to the escape tunnel. Vertical drainpipes provided some sort of air ventilation to the occupants.

Finds included evidence of the locality being used by the Army as a training area during the war. In the OB itself evidence of wooden beams, RSJ girders, corrugated iron panels and wire mesh from bunk beds were uncovered. Even the chemical elsan toilet survived! Over 600 man-hours were invested in the excavation.

This OB was featured in our contribution to 2020 Festival of Archaeology. 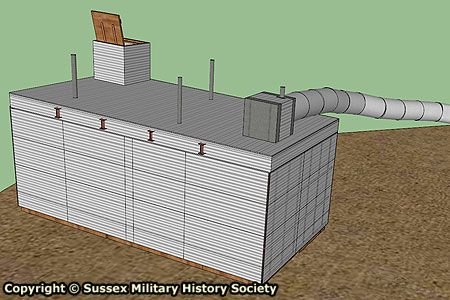 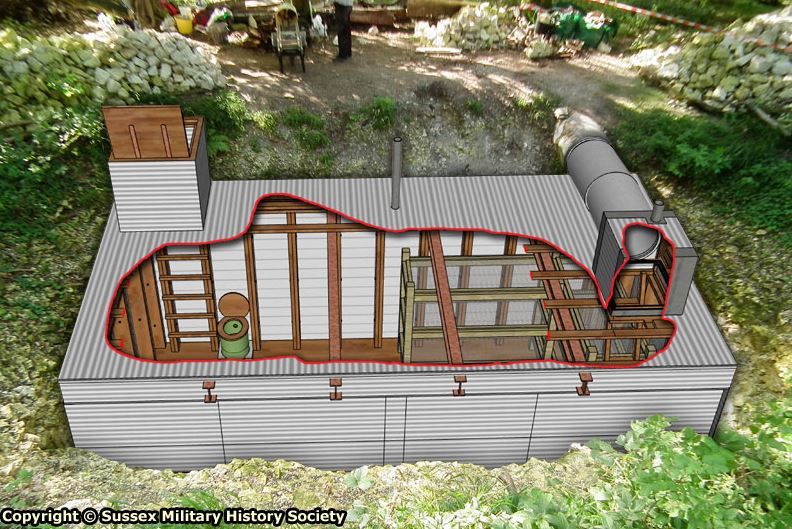 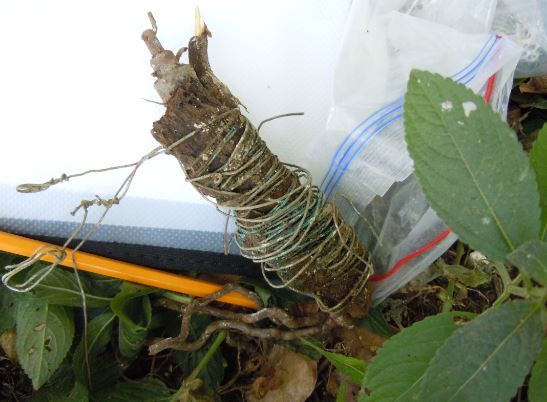 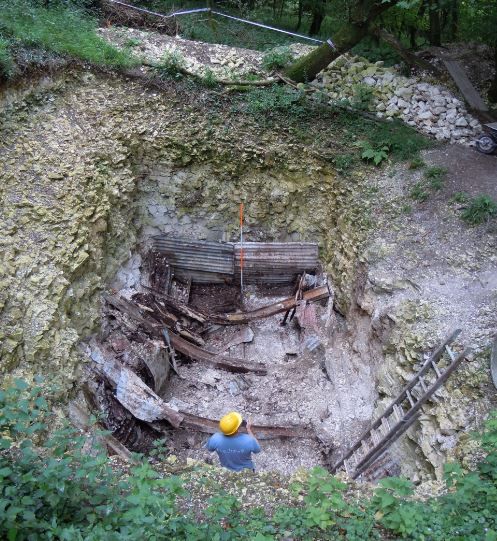 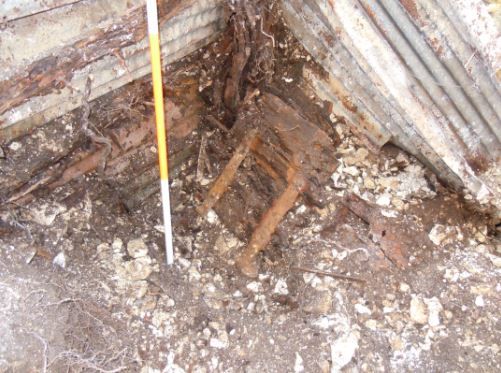 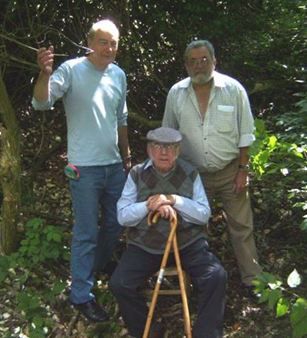 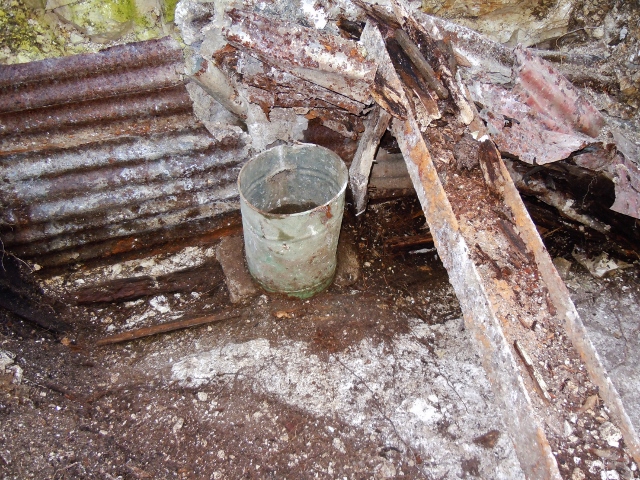 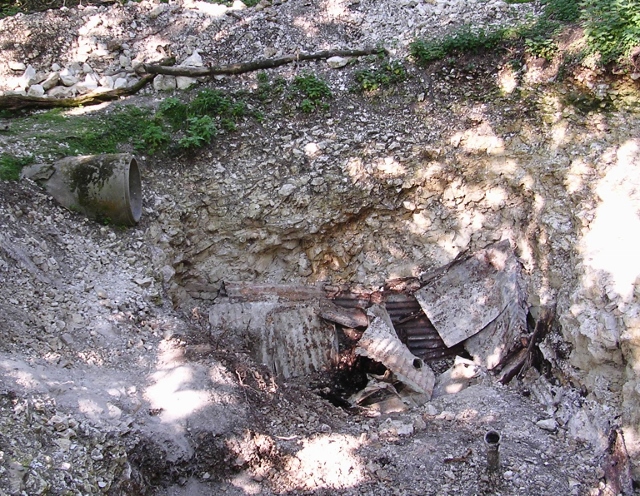 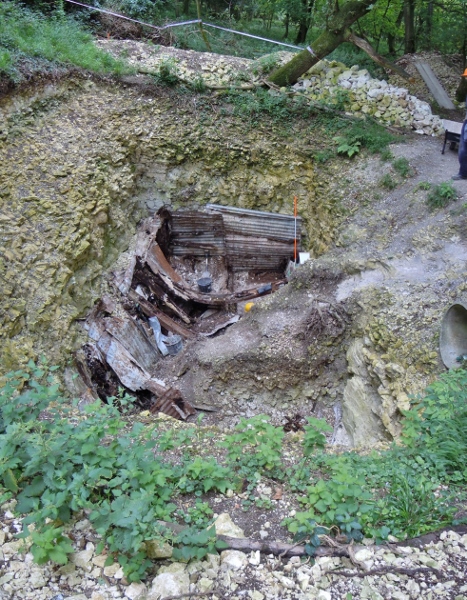 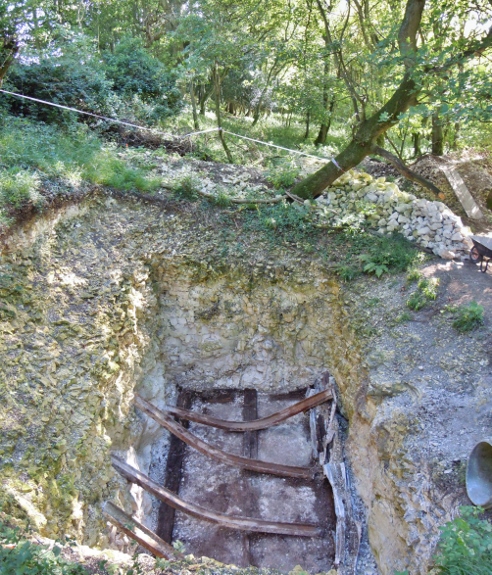 Caption & credit
Main chamber showing RSJs (from Brian Drury)
OB Status
Collapsed with some visible remains
OB accessibility
This OB is on private land. Please do not be tempted to trespass to see it
Location

Railway line and river bridges at Arundel would have been obvious targets along with the A284 road to Littlehampton.

Post invasion use of Arundel Castle could have made that a target.

It is assumed they trained at the regional HQ at Tottington Manor.

Patrol members were all asked to volunteer to be parachuted into France as a pre-invasion plan, with training planned to take place by jumping from a Lysander.

An extract from a diary recorded by the late Bill Lindfield as a young farm worker around 1950, which he allowed his friend Bob Brown to copy and use for historical research purposes. Bob has kindly permitted us to reproduce it here.

This text is an extract from a much larger handwritten document compiled by Bill Lindfield sometime in the 1980’s. The text was transcribed by Brian Drury in 2010 but the copyright remains with Bill’s Estate.

… passing through the five bar gate and climbing to the highest area of the hill. The field we had slipped away west sloping down to a bank which had I suspect been erected to prevent the field from eroding away. Hawthorns elders and other shrub like bushes had been induced to push their roots into the bank to hold it together. These over the many years they had made this their home had spread over the down land turf cascading away down to the gallops that shared these hills with them. The hedge by this time had acquired a floor of about twenty yards in width.

Beneath the thick trunked Hawthorns at the bottom of the first part of the bank the ground levelled and was devoid of any undergrowth. The slope was increasing as it ran away from this area where the brambles thickened as it approached the outside and light.

There was this day about four of us sitting beneath that mantle of Hawthorns having our lunch. We were engaged in drilling that field Peacocks, Len Barnett had been disc harrowing the ploughed land. The disc at an angle cutting and turning the top soil as the sun glinted from their silver surface, in contrast to the yellow of his caterpillar tractor. Alec, my mate in those days whom we called Sarge, which was a shortened version of his surname Sergeant, was driving the orange Fordson half track that pulled the drill on which I rode. My task was to ride the footboard and watch the coulters cut a drill in the prepared surface ensuring that the corn and fertiliser from the top of the drill trickled down the tackle and into the drill without obstruction. I am not sure if the fourth of our party was not Percy from Pulborough who was harrowing both in front and behind us, his harrows pulled by his blue rubber tyred Fordson Major.

It was that fourth person who excused himself from our company and made his way to the undergrowth those few yards away. We sat there eating and yarning and no doubt trying to move a small pipe that protruded from the earth resting against the base of one of those trunks.

Our attention was quickly attracted to Percy from within the undergrowth some twenty or thirty feet away with his call of ‘look here’ We gathered around him as best we could in the brambles and bushes and looked down at a moss covered board that had become visible by his scuffing. It was like a trap door and clearing it we raised it to reveal a hole about three feet deep with a big pipe running away in the direction we had been sitting. Suggestions of various kinds were made as to what this pipe was doing here. I had seen a similar one before but that had been in the drains of the Bypass.

The reason for it to be in such a place was discussed to the full and several opinions put forward but none of them did much to solve the mystery. The pipe of at least two feet in diameter was a mystery that we were determined would be solved. The obvious manner in which to solve it was to follow it. This could not be done from the surface for no sign of it at all was to be seen of its passage below the earth. It had to be crawled along.

I agreed that this was the best solution but did not volunteer to lead, that honour fell to Len. Off we set Len in front striking matches to illuminate the interior of that black passage. The air was clean as we pulled ourselves through that pipe and Len must have travelled what seemed about thirty feet when he commanded ‘Hold it there’s a bloody hole in front of me’

We lay on the bottom of that pipe like a line of worms, each I suspect aware of their own heart beats which in my case at least had quickened because of the anticipation of the unknown. ‘There’s a ladder fixed to the wall I’m going down’ called Len, the excitement telling in his voice. A couple of seconds later and about ten rungs lower he added ‘come on down’ We crawled the remaining length of that pipe and descended that ladder. The light from another match not only illuminating the area around us but enabled a small bit of candle to be noted that was standing on a piece of wood, lighting the wick we stood together our eyes getting used to the more permanent but flickering light.

Looking about us we found ourselves in an underground living abode. There was against one side half a dozen bunks created into permanent positions with boards of four by two. Against the far wall were half a dozen water tanks in which to contain drinking water. It couldn’t be called a cupboard and I suppose alcove would be a better word to describe the other part of the abode. Within this alcove we found picks, shovels, forks plates and table utensils. Above our heads was a cord line draping across the interior on which we found the remnants of a tea towel. A book with quite legible writing on its faded yellowing pages were menus that would spread over several days. The air was not dank as one would expect because an open ended pipe proceeded through the top and was in fact the same that we tried to move under the Hawthorn trunk. It was perfectly dry a result of lead that went into its construction.

60 years later Bill Lindfield with Brian Drury and the gamekeeper confirmed the exact location so that it could be explored at a later date.