Melville House in Fife was the Main Headquarters for Patrols north of the Border, a sub training establishment of Coleshill in the South. Used between late 1941 and 6th September 1943.

Melville House sits tucked away from view, surrounded by woodland and farm land with its close knit farming community and in the shadow of the nearby Lomond hills. Constructed between 1696 and 1703, Melville House was the seat of the Earl of Leven. It sat within the Monimail estate. The estate ground was acquired by Sir Robert Melville in 1612.The land remained in the Melville family having been passed down to sons and a Great nephew. The third Lord Melville died in 1643 and was succeeded by his 7 year old son, George, who was to be responsible for building the present day house on the estate of Monimail. The house continued in the possession of descendants of the first earl of Melville until 1949 when it, together with the contents was sold. Its contents, being auctioned off and sold within, a week of coming onto the market. Lady Leven died in 1938 and the Earl of Leven in 1947.

Captain Eustace Maxwell the newly appointed officer in charge of setting up Auxiliary Units north of the border was visiting Fife; he had been in the county to meet a land owner who was a civilian group leader and had men suitable for setting up a Patrol near to St Andrews. Maxwell had travelled from his HQ near to Stirling which was within a fairly easy drive to various locations in central and east coast Scotland. He actually covered more miles than any serving auxiliary unit officer during his time in Scotland; it was during this secret meeting that mention was made of a large mansion house made available to the war office. It was by now in a rather sorry state having been neglected and partially occupied since the death of Lady Leven in 1938.

On or just after the 19th of August 1940 on an overcast morning, a door opened onto a grassy lawn overlooking statues of Mercury and Fame, in front of them was a Beech lined avenue and a thick mixed woodland.

Eustace Maxwell was settling in to his rather grand HQ. He still continued to visit as many Auxiliary Unit Patrols all over Scotland, but by this time he had appointed others to take on more permanent positions in the way of civilian Group Leaders and Intelligence Officers to oversee the training and construction of Operational Bases and to establish new Patrols in areas previously not covered.

Training was intense at Melville House during the latter part of 1940 and into 1942, units from most of Scotland travelled there by rail or military transport, its rail link, was nearby at Ladybank. Visiting Intelligence Officers from Coleshill House or Signals personnel would at times be collected from the nearby railway station. The house was surrounded by woodland, both conifer and broad leaved, mature beech lined the main avenue, which was planted in the 1800’s. The wooded area to the front of the house was to provide an ideal training ground for the visiting units. A demonstration Operational Base (OB) was constructed in the wooded area and also an underground signals station with a cable, cut into the bark and running up the length of the tree.

150 meters from the rear of the house was a small arms range, facing onto a gentle sloping hilly area; it was to provide excellent facilities for the use of a wide range of weapons. Which, included the .38 revolver, Sten-guns, Thompson sub machine gun. During one range day a sheep was accidentally shot dead and the local farmer, who was eventually compensated had donated the sheep to the house, the sheep found its way to the kitchen, mutton was on the menu for a few days after that!!

Demolition training was a specialty of the Melville house training ground. Personnel were taught how to blow up railway lines and vehicles as well as parked aircraft. Lengths of rail track were positioned in a manner to replicate actual full length tracks’ also in the wooded area was a fenced compound, constructed by Royal Engineers. Made to look like a Laager, which is where armoured vehicles would be parked. Vehicles were indeed parked there, some of military origin and the odd car which were old and dilapidated, unserviceable. Some with German markings crudely painted on the sides just to add a bit of realism. According to David Lampe in his book 'The Last Ditch', mention is made of a demonstration at Melville House where by some vehicles were destroyed in a mock attack by Auxiliary Unit Patrol Members; this did happen but not in the grand style the book mentions. Explosives were used and live rounds fired, but it was small scale and very carefully controlled. The higher echelons viewing such a demonstration were nearer the house rather than down on the ground. Two windows were shattered in one of the outbuildings and a picture fell of a wall in the library and some people did really take cover.
One of which was General Thorne.

Nearby was POW camp Number 77 at Annsmuir, which was also near to the railway station at Ladybank. As another addition to the realism in the scenarios played out at the house, German uniforms and some other items were ‘liberated’ from some of its inmates and collected by various devious means from throughout the plethora of military establishments in the UK.

A Scout Section from the Royal Scots were living at Melville House training the Auxiliary Units and lived initially in tented accommodation as part of the house was out of bounds to the military, later they were billeted in the one of the outbuildings. The house continued to be in the hands of the military until 1944. By then it was under care and maintenance and units having been disbanded or in the case of the scout sections were moved to other locations, some of them later volunteering and joining the SAS as was also the case of a few Auxiliary Unit personnel who were trained at Melville House.

The house was owned by various people after the war. It became the new setting for Dalhousie School,
which had previously occupied Dalhousie Castle, in Midlothian. It was Dalhousie Preparatory Boarding School for very many years before Dalhousie closed. Eventually it was taken over by the Fife County Council who ran it as an Approved School/Centre for young offenders.

In the 1990’s the house was empty and again under care and maintenance and security was on going as there were a number of Adams fireplaces in some of the more grander of the rooms. Fife Constabulary used the house and the grounds for a few drug/firearms exercises, involving sniffer dogs and firearms officer playing out scenarios, which I happened to come across one day while there on one of my many visits. It was at this time that an Irish property company owned the house. It was then sold to an businessman who was to restore the vast majority of the house of a 2 year period, spending £2 million in the process. Sadly the project ground to a halt and although substantial work had been done and the house was by now painted in the original colour scheme it would have been in the late 1700’s the standard of work was high and had to be as Historic Scotland stipulated that it would have to be done to very high standard in keeping with any historic building of that age and stature.

The house was repossessed and became the most expensive repossession in Scotland. Having been up for sale for £4 million it was also the most expensive house on the market. It was by now empty except for a caretaker looking after the entire house, heating would cost about £35,000 a year!! Whoever was going to buy this property would have to be fairly well off to keep standards high. It sold in November 2009 for £1.65 million, which was a bargain.

Hopefully the story will continue, as the grounds in front of the house which are now owned by a sand and gravel company whose aim is to extract the material over a 10 year period and then to restore the land to its former glory, lined avenues and tree planting in accordance with the original layout. 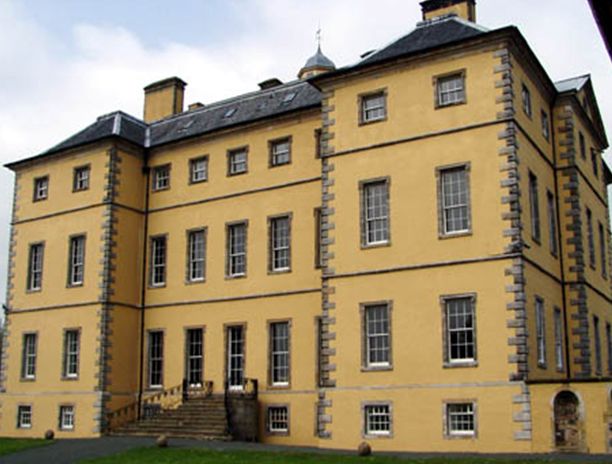 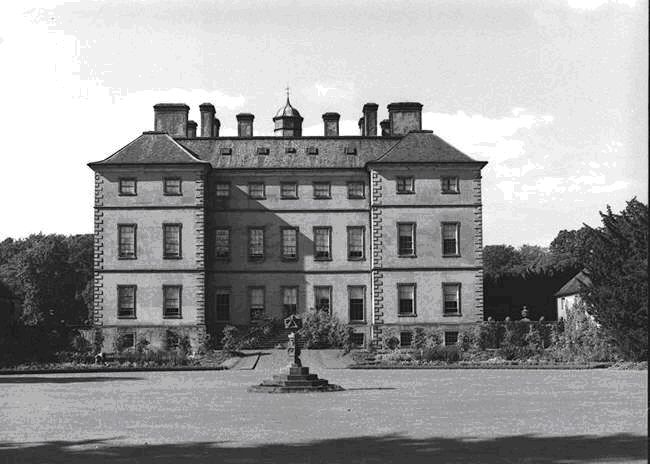