The village of Drellingore lies 3 miles north-east of Folkestone.

Group Commander Lieutenant Cecil Lines may have been the original Patrol Leader of this Patrol prior to the creation of Groups. Three of the Patrol joined in 1943 most likely replacing men who left to join the Forces.

The Operational Base was built in woods above Drellingore. The location was originally provided by Sam Osborne to local author Roy Humphreys and subsequently recorded for the Defence of Britain Project. Sam had first become aware of the site when a lady who lived in a cottage on his farm talked to him about someone sinking a "bloody Nissen Hut" in the woods behind her house. It was not actually on his land, but that of a neighbour, George Marsh. Later George approached Sam to join the Patrol.

Sam Osbourne; “There were a lot of poachers in the area so we had to be careful not to leave footprints nor create a footpath to the OB. We very rarely visited it. A tree stump was bolted on to a steel man-hole cover. This was hinged and counter balanced to allow access down an eight foot deep, three foot square concrete shaft with iron rods in the side. The shaft connected with a large chamber dug out of the hillside and measured 16 foot square. There was an escape tunnel that led to a Nissan hut that was three foot off the ground. You crawled through a wooden flap covered with earth".

Kevin Baverstock received a letter in 2011 from someone who stayed with George Marsh as a boy during the war. "One day when Pa was on leave, me, Dad and "Uncle George" took a walk and when 3 of us reached a clearing in the woods, Uncle ran his hand down the trunk of a tree and a square of turf rose from the ground, like a small grass top table on 4 legs. We peered into the hole below, there was a rough staircase cut into the chalk and we descended into a small room. It had bunks on one side and armaments on the other. When we surfaced Uncle ran his hand over the tree trunk again and the "table" descended, invisible, impossible to detect where it had ever been."

Reportedly the OB was built by Canadians, most likely the Canadian Royal Engineers Tunnelling Company.

The OB consisted of block built entrance shaft, with a solid metal manhole cover lid with a tree stump fixed on top for camouflage. The lid was counter-weighted and could be easily moved by one man, pivoting to the side to allow entry. The shaft was at least 12 feet deep and 30 inches by 32 inches, with a 5 inch lip to support the lid and scaffold pole rungs leading down.

The main chamber was a Nissen Hut like Elephant Shelter with block built end walls approximately 12 yards long. The chamber apparently contained bunks, a stove, a 50 gallon galvanised water tank, an Elsan toilet and a lamp during the war, besides their sabotage equipment and rations for two weeks. There were problems with condensation, so the chamber was lined with painted with a mixture of white paint, ground cork and white varnish.

At the opposite end from the shaft was a "bolt hole", and escape tunnel made up of concrete sewer pipes. The tunnel was L-shaped and opened on the hillside below. The exit was a rectangular concrete opening with a wooden frame with a wooden door, covered in earth, opening outwards.

The main shelter collapsed after the war, leaving only the remains of the end wall and the corrugated iron remnants of the main chamber structure. The block built entrance shaft with rotting and now partially absent metal rungs and the concrete escape tunnel remain intact. (Site visits 1995, 2021) 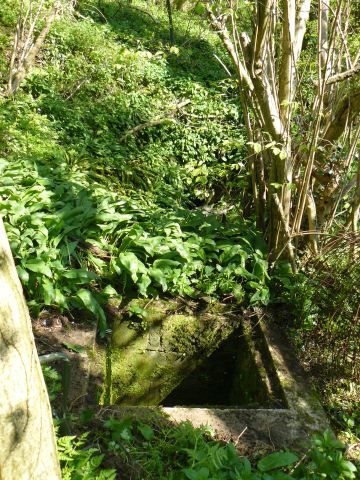 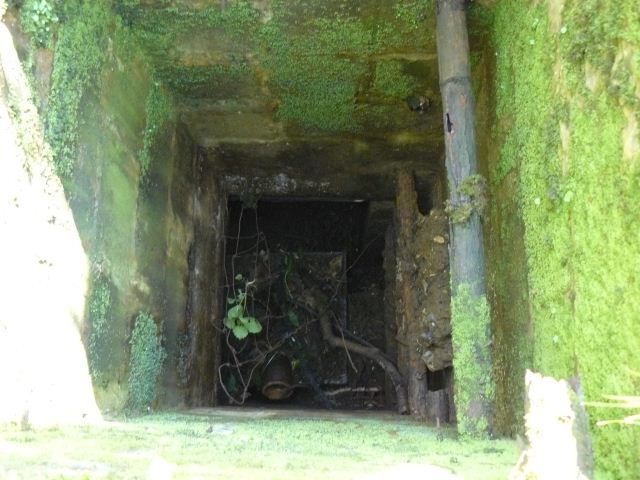 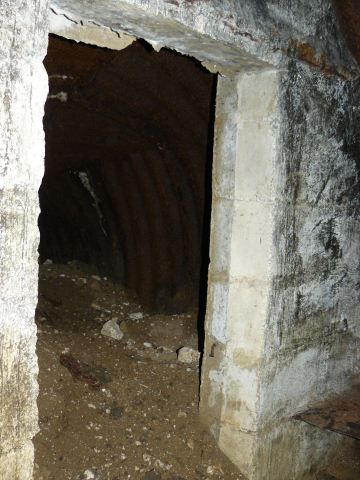 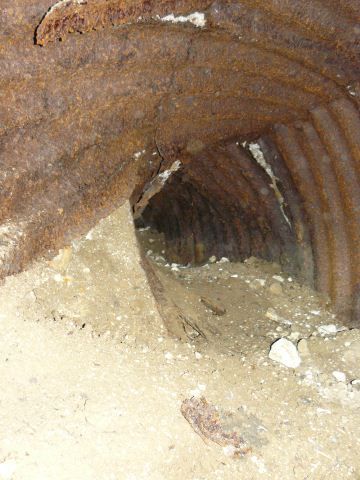 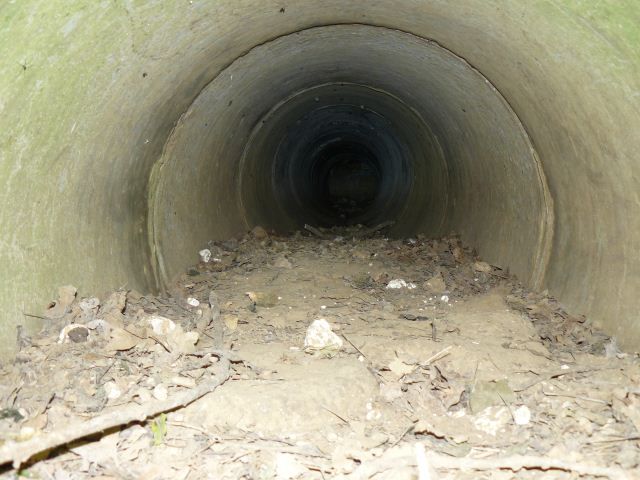 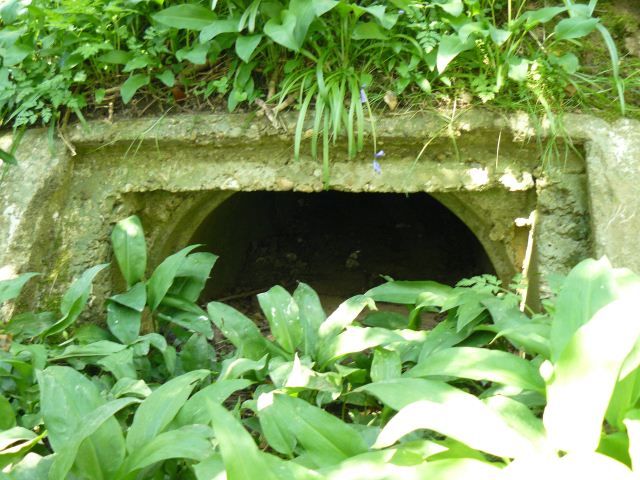 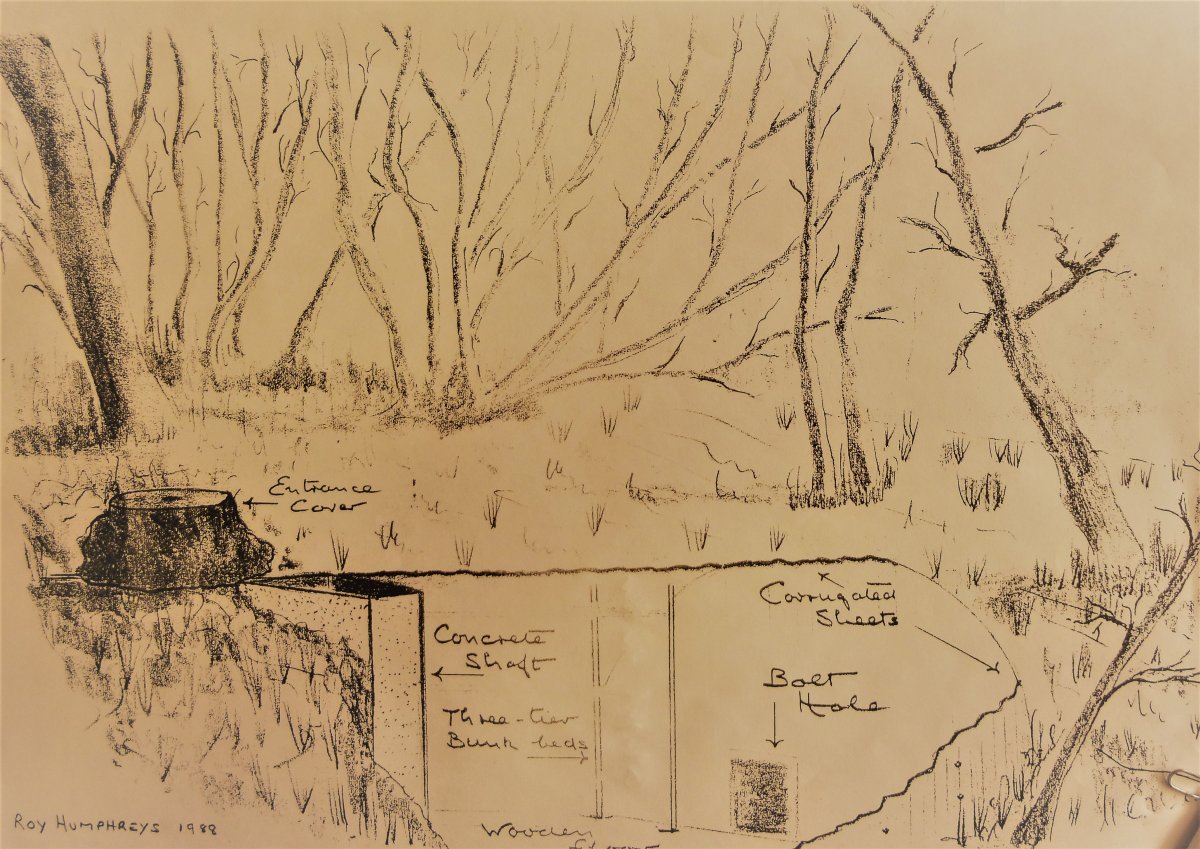 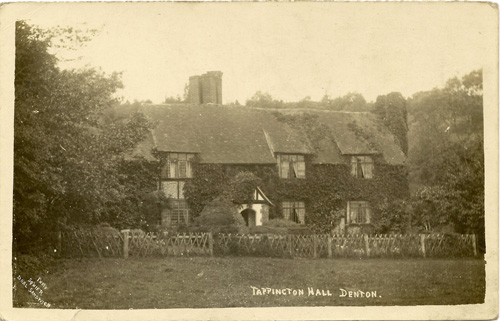 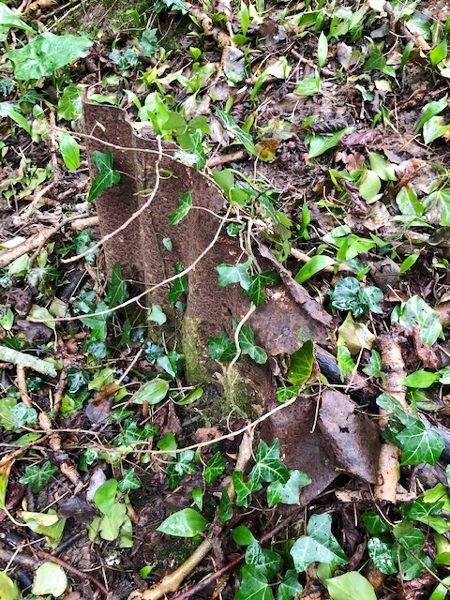 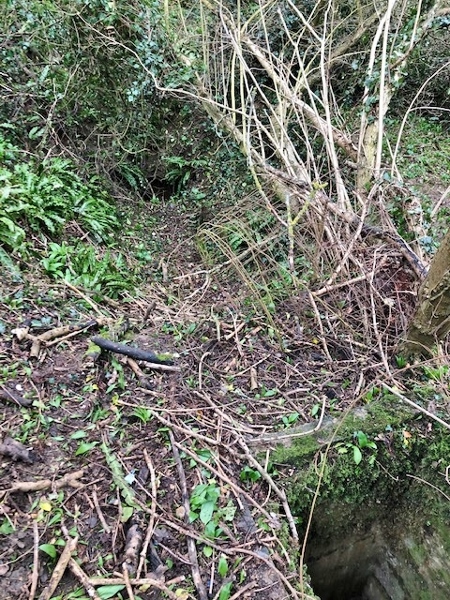 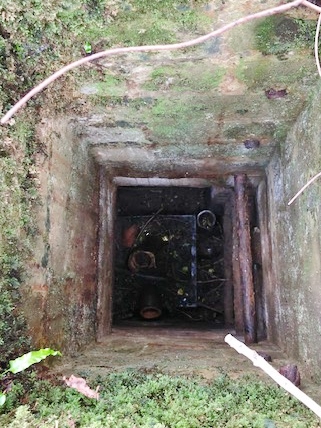 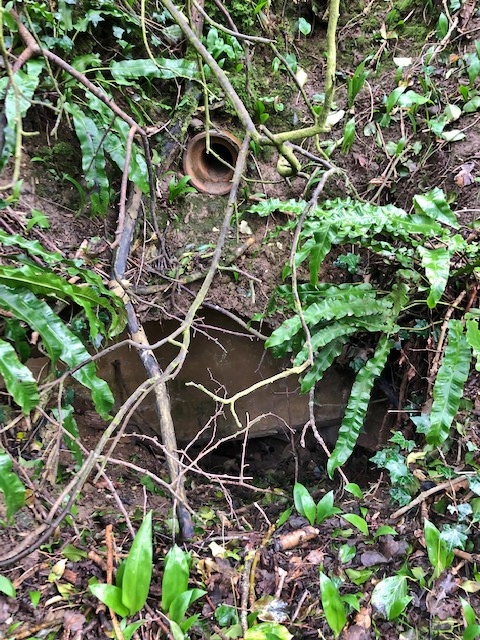 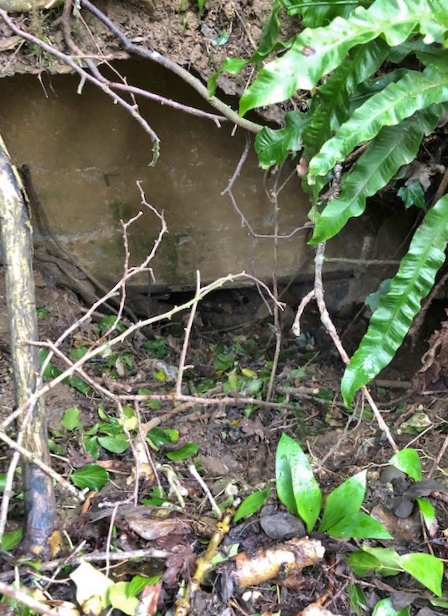 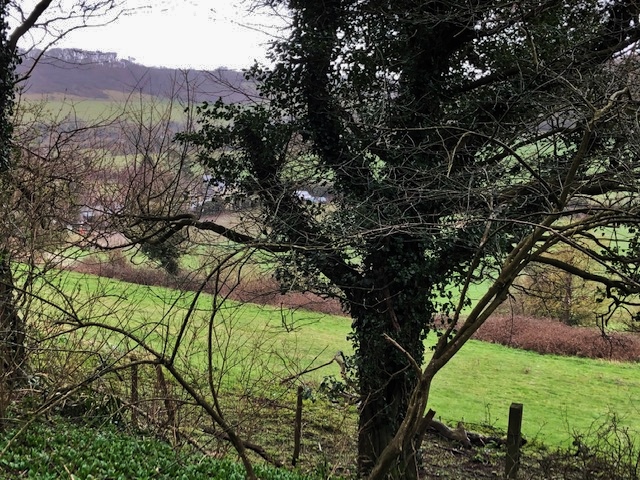 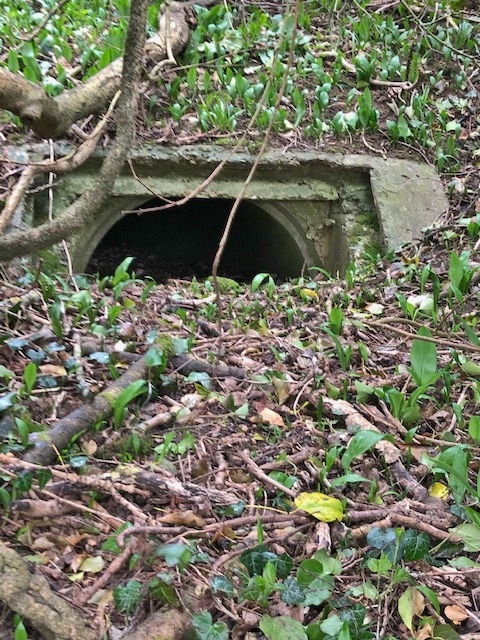 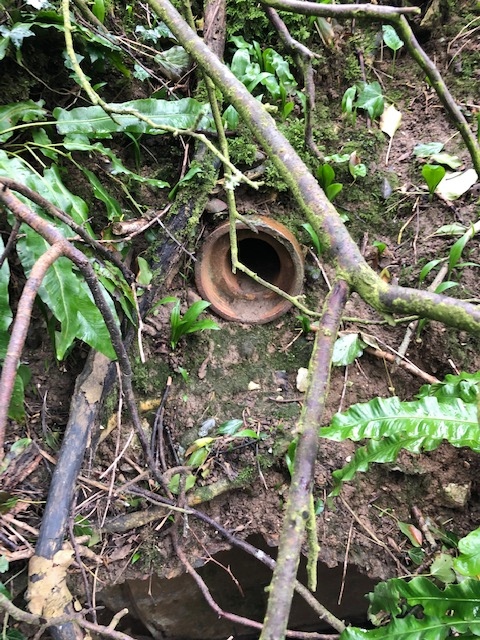 Caption & credit
Drellingore OB vent pipe 2021
OB Status
Collapsed with some visible remains
OB accessibility
This OB is on private land. Please do not be tempted to trespass to see it
Location

The Patrol were not allocated specific targets. They did check out Hockley Sole, near Standen, a large country house they thought the Germans would be likely to occupy. They had also identified the Folkestone railway viaduct and swing bridge, together with the roads from the ports of Dover and Folkestone as suitable for their attention in the event of an invasion.

Sam Osbourne; “During an invasion we were expecting a regular army guy to join the group. We did not have any specific targets. However, we did recce Hockley Sole, a large country house near Standen that we expected German officers to occupy. Charles Fayers and I were both from Folkestone and we wondered if we were selected because of our urban knowledge. The Folkestone viaduct and swing bridge which carried trains between Folkestone and Dover would have been a good target for demolition.
Our plan was to lie low for five days and then pop up and have a look around. We would have checked the main roads between Dover, Folkestone and Canterbury for targets coming from the harbours. All the time we had food we could have operated but we were isolated and did not have a radio. Once the food was gone we had no idea what we were going to do. We made a pact amongst ourselves that if anyone was captured we would polish them off. Better to be shot by a friend than be tortured."

Sam Osborne did not recall going to Coleshill House or even training at the Garth. He said that they went regularly to Tappington Hall near Denton for training on a Sunday. This included grenade throwing, shooting and setting booby traps. Two other groups trained there, though Sam Osborne said that he never spoke to the men, though some were familiar from local farm sales.

Sam Osbourne; "We were very confident after training but we never went out on night patrols outside of training exercises. Night exercises were carried out against bases in Dover."

Each man had a .38 Smith and Wesson revolver, a Fairbairn-Sykes Commando knife and a brass knuckleduster. The Patrol also had rubber truncheons, a Thompson sub-machine gun, Springfield .300 rifles and a .22 rifle with telescopic sight.

They were also issued with grenades, phosphorus bombs, paraffin incendiaries, anti-personnel mines, plastic explosive and gelignite, along with detonators, time pencils and trip wires to set these off when needed. Each man had a pair of plimsolls that they could wear to help move silently.

The grenades and some explosives were buried beneath a nearby blackberry bush. They were apparently discovered by a gamekeeper or one of the poachers often in the area, who reported their find to the Police. Sam Osborne found the Police searching for the site and warned them off. However the Home Guard said he was not one of their unit and so he found himself under arrest, until Lieutenant Lines was able to secure his release.

A lady, Ida Bailey, who lived at the end of the lane, used to regularly walk her dog in the area. Sam Osborne diverted her away from the bunker on one occasion and on reporting this to Lieutenant Lines, were told she would have to be eliminated in the event of invasion. The Patrol were more inclined to put her on a bus or train out of the area if the Germans landed.

Before D - Day two representatives from each Patrol, about 30 men, met at the Swingate Inn, between Dover and Deal. Henry Curling, a member of the Guston Patrol was the landlord of the Swingate Inn. Sam Osborne and Dennis Dewar attended. Apparently, there were several Red Tabs there. They asked for volunteers to be dropped into France to destroy bridges and railway lines, then hide up and wait for the army to catch up. To the Red Tabs surprise everyone volunteered. Nothing was heard again.

In 1989 Sam Osbourne talked to Folkestone, Hythe, Sandgate & Cheriton Herald. In 1994 Sam spoke of his time in Auxiliary Units to Steven Sutton. A copy is held at IWM.