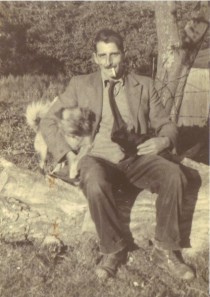 In 1994 Sam spoke of his time in Auxiliary Units to Steven Sutton. A copy is held at IWM.

Sam Osborne: “I was a butcher in Sidney Street, Folkestone, when the war started. This was a reserved occupation because Folkestone’s population had grown with all the evacuees from London. This changed after Dunkirk, when everyone started leaving Folkestone.

The troop returning from France had a large amount of guns and ammunition, sporting and shotguns for sale. I bought a three-barrelled (two shotgun, one rifle and two triggers) combination and an automatic pistol.

I volunteered for the Air Sea Rescue and RAF. I was told you don’t decide where you want to go, you’ll go where you are told to. I said like bloody hell, no-one tells me what to do. I signed on as a stockman for Mr Cooper at Hope Farm, near Capel-le-Ferne. Then I took on a run-down farm at Drellingore as a tenant.

I was approached by George Marsh, who was the chief engineer at the waterworks, nearby, who said he was forming a private Home Guard unit. George’s brother-in-law was Cecil Lines, who was in charge of all local guerrilla units. George only went to the village school and could hardly read or write but he was a brilliant engineer. He used to make miniature working steam engines. We did square bashing once a month at Wye College and whenever we were told to right wheel he would go left.

I didn’t sign the Official Secrets Act. It was up to the Patrol Leader to select people who were trustworthy. You were not going to open your mouth when you might get it in the neck later. I do not recall meeting Captain Field.

I never thought the Germans would come but if they did we were ready for them. I wasn’t going to live under the Germans. I was going to remain British, even if it meant kicking the bucket.

I’d learned a lot but never put any of it into practice. When you have been professionally trained you want to see what you could have done.”

Peggy Osborne: “Sam was very proud to be asked to be a member of the Auxiliary Unit to helping any way to keep our lovely country free. Because it was so secret and local people did not know about it remarks were occasionally made to me that, ‘it’s a pity that Sam was not doing his duty by being a member of the Forces’. What could I say? Little did they know.”