The Coleshill grounds had never been formally investigated until CART set up the Coleshill Uncovered project in 2011. Its objective was to learn more about the site through historical desktop research and archaeological study. An archaeological site proposal was submitted to the National Trust.

The first survey was conducted on 222 and 23 January 2011 with about 30 enthusiastic volunteers.The second stage of work was conducted in July 2011.

CART worked with staff and students at Bristol University, members of Subterranea Britannica, the Ridgeway Military and Aviation Research Group (RMARG) and the Great War Archaeology Group (GWAG). The overall project was managed by CART, with John Winterburn and Anna Gow leading the archaeological work.

A project outline was given by Tom Sykes (CART), and the archaeological strategy and methodology was given by John Winterburn and Anna Gow, who handled these aspects throughout the weekend with an easy-going yet professional touch.

The work began with 3 teams focusing on their given tasks:

1/ identification of the footings of several known Nissen huts in woodland east of the main house (Sector 1);

2/ general survey (including metal detection) employing a line of people visually examining the ground of Sector 1, and subsequently Sector 2, woodland east of the ornamental main gates.

3/ close visual examination of the "Ha-Ha", a 17th century ornamental wall and ditch that follows just beyond the outline of Coleshill House, and the woodland adjacent to the north wall around the grounds.

Team 1 worked to find and clear the concrete bases of the Nissen huts and discovered one large base, perhaps previously unknown. 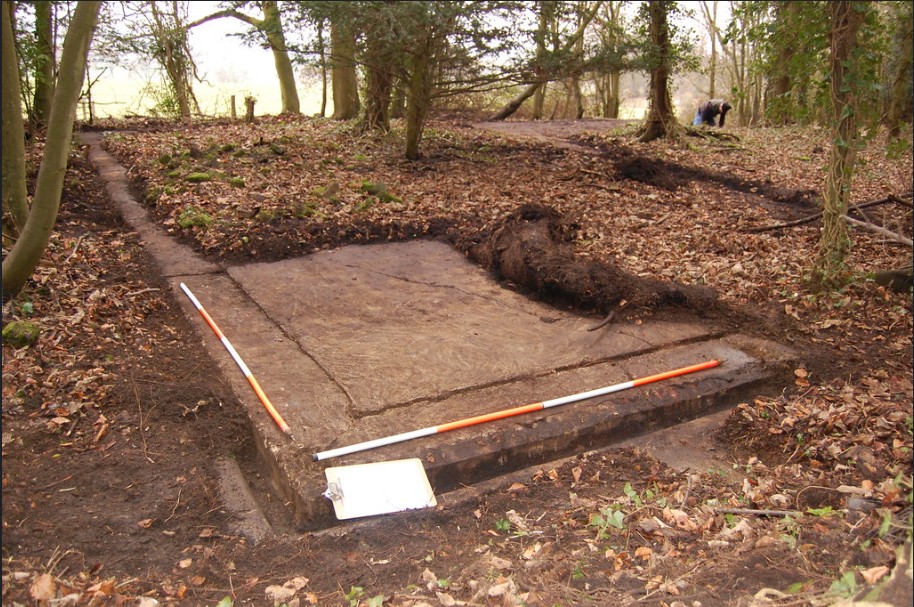 Team 2 in that area discovered several bullet cases and further east some light aluminium work perhaps originating from road vehicles or even an aircraft (Auxiliers reported both being at Coleshill for demolitions/explosives training).

Team 3 looked for the Ha-Ha on the partially open grass areas south of Coleshill house itself. No trace was found, but the surface remains of a water or sewage cistern was investigated just south of a large Cedar tree. The approximate line of the Ha-Ha was followed around the house and garden to the east and searched for through the adjacent woodland (Sector 1), again without trace. Further east clear remains of the Ha-ha became visible and examination of the wall began in earnest.

Because the known underground OB (operational base) has its escape tunnel exiting in the Ha-ha wall, Team 3 were looking for disturbance/changes to the stonework; particularly deep gaps between stones were examined with long probes and a torch.

As so much of the wall was similar, the team chose to examine the several hundred metres of the Ha-ha more than once. This methodology proved worthwhile when Peter Antill found one or two slightly newer looking stones and, upon gentle removal, discovered a small concealed chamber containing a complete British Army bayonet. 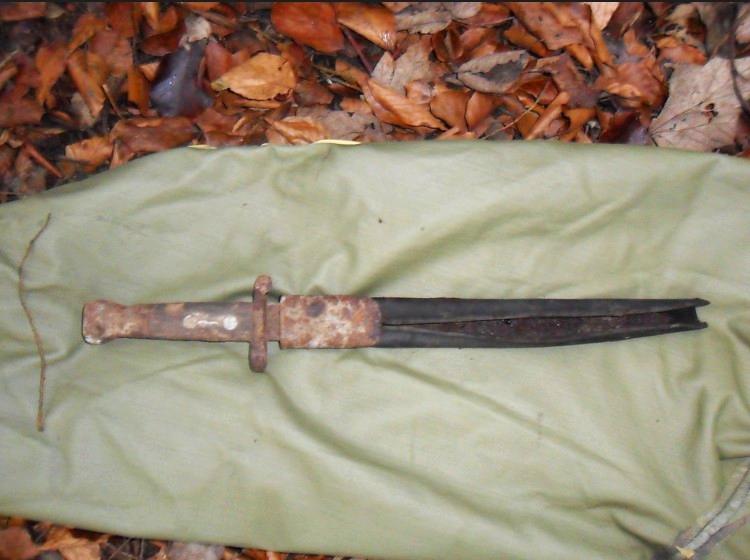 On Saturday afternoon, Team 1 continued clearing the concrete bases in Sector 1, while Team 2 (metal detectorists) moved into Sector 2, the woodland east of the ornamental gates.

Team 3 examined the Ha-Ha close to the known OB locating ceramic pipe fragments (a possible breather for the OB's chemical toilet), along with metal hinges and hooks (in likely outfill from the collapsed escape tunnel - previously excavated). Cement filling was found at the escape tunnel exit between the Ha-Ha's stonework; an application presumably designed to prevent access when the main entrance was also sealed to put the OB beyond use. Also found was a sizeable fragment of concrete, including chicken wire and wooden frame impressions; the latter pair being structural materials described by Auxiliers as commonly constituting an original main hatch; and so this find was almost certainly part of the concrete seal over the OB's everyday entrance.

Subsequently Team 3 examined the very dilapidated remains of the Ha-Ha east of the OB, and searched for telephone lines (postulated to run between the OB and the possible observation post near by on the north side of the Coleshill to Faringdon road). By evening, the Ha-Ha and the telephone line search had yielded no finds except (via metal detector) the team identified a live WW2 British 2-inch mortar round. 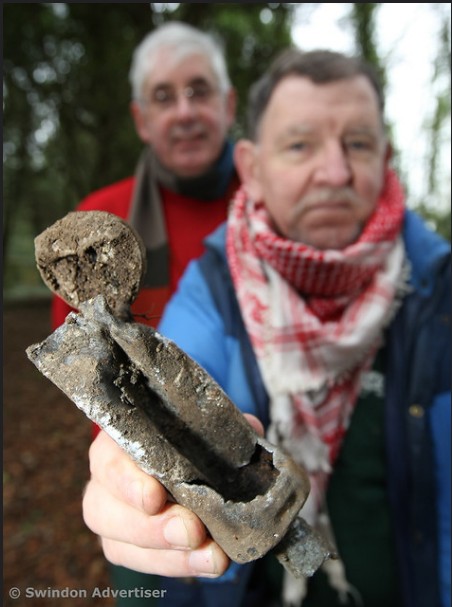 After bomb disposal experts confirmed and blew up the mortar round, the teams continued, generally at the same locations as Saturday but now pursuing new clues towards further finds.

Large anomalies were identified to the east of the known OB using deep field metal detection; the Ha-Ha's entire length was re-examined (twice) for any other areas of concrete infill around the stonework, but without result. The various teams recorded the locations of finds with GPS.

Later, Team 3 focused on testing CART's special recording sheet for OBs. These are designed to help lone researchers when working in the field. One observation concerned the possible original construction technique of the escape tunnel.

The tunnel was partially made through solid rock, some two to three feet below the woodland surface, and in this are a number of channels (approx 1 to 2 inches wide) on both side walls. It was posited that these were perhaps drilled down from the surface and subsequently filled with high explosive in order to blast the rock, allowing easier digging of the tunnel.

As the light began to fade in the afternoon, the various teams packed up their equipment and headed back to the courtyard. And as we all departed we agreed on the completion of a very exciting and satisfying stage of the Coleshill Uncovered project.

The identity of many of these finds is yet to be established but we have found the following,

The Bayonet and scabbard

With the help and advice of the former Royal Armouries curator at the Museum of London, one of the Coleshill Uncovered team, Guy Taylor, has successfully managed to remove the bayonet from the scabbard.

The corrosion on the blade appears to be relatively superficial for the most part; the worst appears to be on the cross-guard, but even this is not too bad overall. It is clear that the edges of the blade have not been sharpened, so the fighting-knife theory appears not to hold up. Such is archaeology!

Guy has used a fine round scalpel blade to remove a small amount of the corrosion from the ricasso to see if it is possible to find any markings stamped on the blade. There do not appear to be any deep, clearly defined, impressions alas, but there is possibly a rather light letter R (VR?). As far as further treatment is concerned, the separation of scabbard and bayonet will make the conservation process much easier. When Guy spoke initially to the senior Museum of London conservator, she said that if he could separate them, the scabbard could be treated with a proprietary leather treatment. As the leather is already drying and stiffening, Guy will go ahead with this. There is some corrosion on the scabbard metalwork but it is not too far gone and after the loose material has been removed it will probably be sufficient to keep it in a relatively dry atmosphere; a small silica gel bag will be adequate until it goes on display.

Guy suspects that the bayonet blade would benefit from some form of cleaning and/or chemical inhibition. The wood grips probably need only an application of some commercially available wood preservative; treatment with PEG and freeze-drying is thankfully not called for.

See finds images from Stage One here and here.

Stage One - 1st April 2011: The official report and findings for work carried out in January can be downloaded here. Images from the report can be seen here.