Concealed in the woods close to the North lodge was the MT (Motor Transport) Park, an area that hid the vehicles used by Auxiliary Units GHQ.  A Royal Army Service Corps detachment operated and maintained the vehicles. Routine servicing was done on site. If major repair work was required the vehicles went to Simpson’s, the local garage in nearby Highworth.  All that remains now is the concrete inspection ramp.

As described in the report, the inspection pit has reinforcing bars protruding on top of the walls at the South end which would have supported some form of ‘Stop’ to prevent a vehicle running off the end. No side guides are evident so that careful directional guidance would have been necessary. This means that a vehicle would have been reversed into place from the North. The concrete walls have vertical ends. There does not appear to be any provision at the North end to support concrete ramps. As the photographs show there is a difference in ground level. The size of the trees growing in the high ground may indicate that this is not post war fill but original ground level thereby reducing the size of any ramp needed.

Access to the inspection ramp required space to manoeuvre therefore the servicing area would not have been used for parking vehicles. The trees in this area have grown post war.

Just to the East of the inspection ramp there is a low level brick pier and a vertical length of angle iron (1 ½ inch) which does not appear to be associated with the house stone rubble dumped nearby. 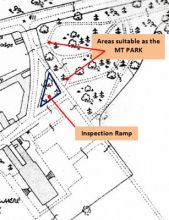 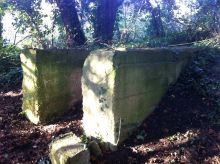 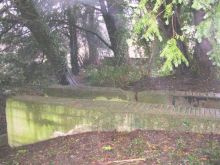 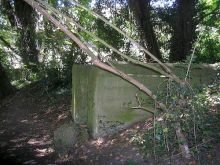