Number 23, High Street, Highworth was the famous Highworth Post Office run by Mrs Mabel Stranks. The layout of the Post Office that the Auxiliers would have discovered consisted of the main counter, the sorting office and a switchboard room. There was a 100-line manual switchboard used to call the number Highworth 85 to reach Coleshill GHQ.

The Post Office on the High Street, is/was a double fronted building with a central corridor which ran through to the walled back garden. The garden had gates into the back garden of the Reason’s butchers to the left and the doctor’s to the right.

The Post Office was to the left of the corridor, and it had a 100 line manual switchboard set into the front bay window which was screened such that it could not be seen from the public area.The postal sorting office was to the right of the corridor, and apparently acted as HQ for up to 12 delivery staff at any time. The living accommodation was accessible from the corridor, and in turn had access to the service/staff side of the post office. The residential part of the building was extensive – the large reception hall leading to the dining room and kitchen to the rear, whilst an imposing sweep of wide and shallow stairs rose to an impressive lounge overlooking the street and a number of bedrooms.

It was probably Major Henderson who devised the extra layer of security that became the ‘Gateway’ to Coleshill. Mabel Stranks the Post Mistress at Highworth Post Office was approached and agreed to act as the first point of contact for visiting training course attendees. Highworth Station was at the end of the branch line from Swindon and 3 miles from Coleshill. Mabel Stranks was the Highworth Post Mistress, a widow and the dependable face of village life who sorted the stamps and telegrams for over 25 years.

The Highworth Post Office was aptly renamed the 'Auxiliary Gateway'. Senior staff knew that their entire operation would be compromised if anyone found out what was going on at Coleshill House. They needed complete secrecy and a different address. The Post Office was a perfect 'go-between' with strangers visiting all the time and the Post Mistress known for her unassuming nature and discretion. The official address of the Auxiliary Gateway therefore became GHQ Auxiliary Units, c/o General Post Office, Highworth, Wiltshire and became the first port of call for all personnel visiting the Coleshill HQ.

A story has grown up that when Auxiliers arrived, they would ask for Mabel Stranks, give a password and be told to wait. Mabel would then go into her office and make a series of phone calls (very often making visitors wait for hours). A blacked out 1500tw truck would then arrive and those 'screened' as official by Mrs Stranks would be driven to Coleshill House by the most indirect route. The story even goes that when Field Marshall Montgomery arrived he too was asked to wait in his car while Mrs Stranks checked his credentials !

Some contemporary peers have questioned the role Mabel played in security vetting the Auxiliers.

County records put Mrs Mabel Annie Stranks as the Post Mistress at Highworth in 1927, responsible for the counter service, the postal delivery service, and the telephone switchboad

Mabel remained as Post Mistress at Highworth until about the late 1950’s when her son Ted took over as Post Master and moved the business from the High Street to the Market Square where his family and Mabel lived “over the shop” – where Mabel died quietly at the age of 88 whilst sitting in her armchair after breakfast.

Recently the building has been completely refurbished, with the ground floor layout basically the same arranged for commercial purposes and the first floor residential. The owner kindly gave CART permission to put up a display board in 2013 in the central hallway explaining the historic link with Auxiliary Units. Pictures of the unveiling are shown below with our own Bill Ashby, and TV coverage can be seen here: 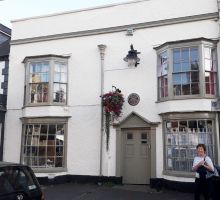 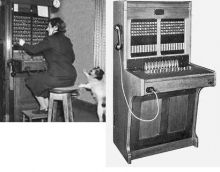 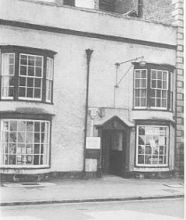 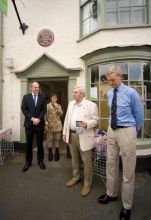 Caption & credit
Outside the PO unveiling the plaque (by calyxpix) 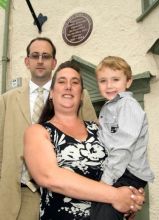 Caption & credit
Unveiling the plaque with the Stranks family (by calyxpix) 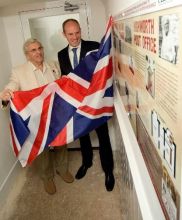 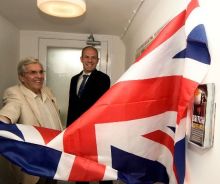 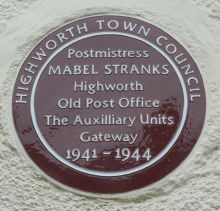 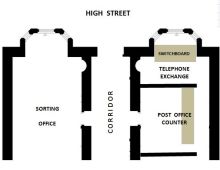 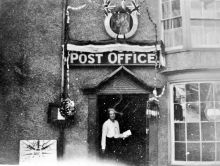 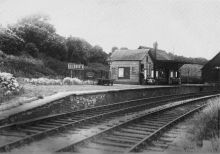 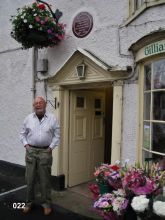 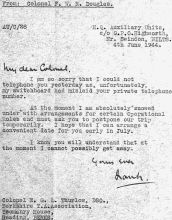 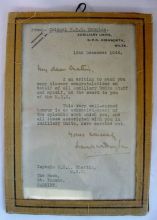