The Patrol used the ruins of a local Manor.

The Patrol utilised the cellars of a local mansion that was pulled down just before the war. But this location was considered unsafe because it was to close to the road so the O.B. was moved to the Ice House.

This was chosen as a better base as it was more secluded than the Manor. The Ice House had not been used for many years as the manor house (basement of this was their first O.B.) had been derelict for some time. Right outside the entrance to the Ice House was used at the time of the war as a rubbish pit. The trapdoor was made by attaching old tin cans and other rubbish to a wooden board that when in place blended in with the rest of the pit. The only downside was the lack of escape exit. Joists were put up to make floors and on the lower level weapons and explosives were stored. A table on a hinge was used as trap door to get to the lower level. Unfortunately the Ice House was long ago destroyed when landowner at the time was clearing space.

Group Commanders Lieutenant John Graves and his brother 2nd Lieutenant Charles Graves both visited the OB to check on the explosives: “We had an OB at Evington, in the old ice house. It was on two floors and all the stores were on the lower level. We had to check the boxes of phosphorous bombs because we’d been told they were rusting and needed to be greased up. My brother Jack, and I went there with another chap from the Crundale group, Bish Legg; he worked for us at the lime quarry. In the top floor of the hide was a square table and the legs were fixed to the floor so that when you lifted it up there was passage down to the next level. Underneath this hatch was another one going down to the bottom floor. Well, somebody had left the hatch open and when I went through the top one I fell straight down to the bottom level. Then we lifted the boxes of bombs down and somebody dropped one.”

This Patrol had no Observation Posts but the army did make them a small hide for explosives and grenades in a nearby wood. 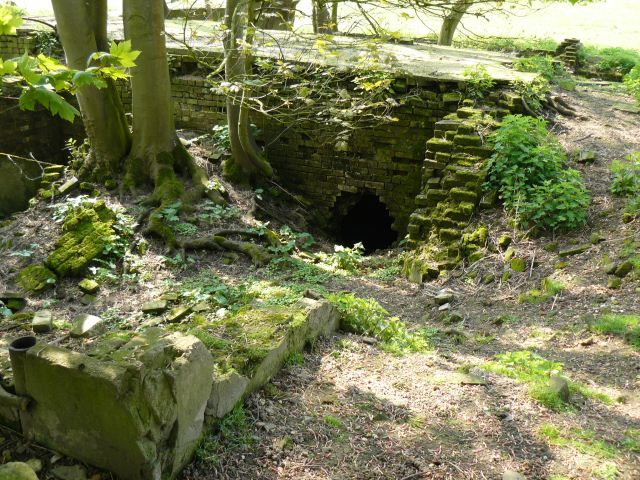 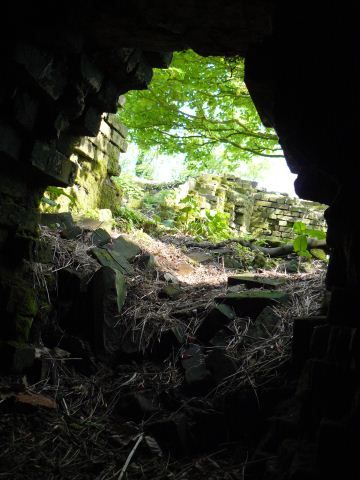 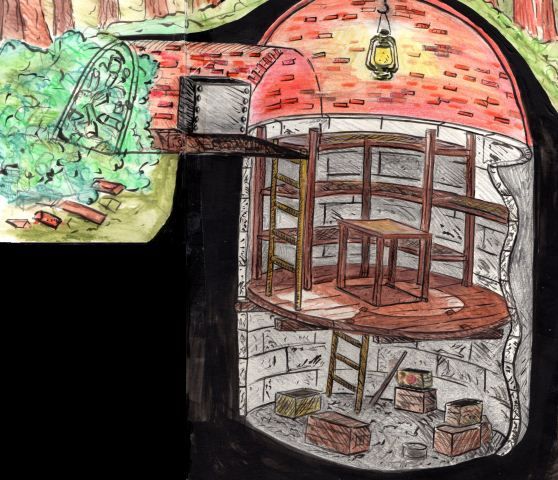 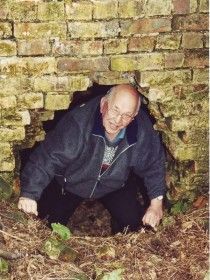 Caption & credit
Ron Martin at Trapdoor to celler
OB Status
Destroyed
OB accessibility
This OB is on private land. Please do not be tempted to trespass to see it
Location

Training took place at the Garth normally every two to three weeks. Auxilier Ron Martin remembered Captain McNicholl teaching them. One thing he told them on training one day was that he expected every patrol member to be able to get a head shot at 50 yards with a rifle with standard sights.

One day Sergeant Peter Leonard was called down to the Garth because some high ranking men were visiting to inspect. He was told to wear uniform so this he did. Although on turning up at the Garth one of the Lovet scouts a Sergeant Macdonald still based there to train men couldn’t stop laughing at him which he found very puzzling. After a while he calmed himself down and they told Peter why he was laughing! Peter had put his Gaiters on upside down!

Ron Martin: “We trained at The Garth once a month. We were taught how to use plastic explosives, kill sentries with a knife or our bare hands, set booby traps and generally how to cause as much mayhem as possible. We learnt some pretty nasty stuff. We also trained on our own in the Bavinge Valley and at Bodsham. We went to Coleshill once."

The Patrol also trained with the nearby Crundale Patrol. They would go to a certain field in Crundale to practice shooting and using explosives. When Ron Martin joined the Patrol and on his first trip to Crundale to train with the other Patrol, there was a shooting competition. Everyone laughed and joked saying how they would beat Ron. They didn’t laugh for long as Ron quickly won the competiton and showed them!

On one occasion they were testing unit charges by placing them under a propeller hub from a crashed spitfire and they would see how far they could send it into the air.

Also mock attacks would be done against the local Home guard and nearby army stationed at Wye.

Auxilier Alan Chester recalled: "Our supplies were dropped off at night in the fields near the Devil’s Kneading Trough between Wye and Hastingleigh. We would then manhandle them across country to the OB."

Auxilier Ron Martin: “Personal weapons included .38 Smith & Wesson revolver and a dagger. The Patrol had one Thompson sub machine gun, two Ross rifles and one converted Ross grenade launcher. Later we were all issued with Sten guns. We wore battle dress but without badges or insignia.”

Hastingleigh Patrol was initially set up by Peter Fleming in 1940. In 1941 Auxilier Ron Martin was asked by one of the Patrol members if he would be interested in joining which he promptly said yes. Shortly after Ron joined two of the seven man patrol left due to their age. This dropped the number to five which it stayed at for the rest of the war.

At stand down the Patrol's Limpet mines where left behind by the Army who said they didn’t want them and the patrol could dispose of them.

Auxilier Ron Martin took some up to a field in Hastingleigh where he proceeded to put one down a rabbit hole and set up the fuse wire. Once this was done he lit it and hid. Just at this moment their Patrol leader Peter Leonard turned up in his car and rushed over to Ron and told him the Army had changed their mind and wanted the mines back. At this moment Ron told him to “Get his bloody head down” and the field suddenly erupted behind Peter who luckily managed to get cover just before the explosion!