Milford Haven is a town and community in Pembrokeshire, Wales. It is situated on the north side of the Milford Haven Waterway, an estuary forming a natural harbour that has been used as a port since the Middle Ages.

The exact location is currently unknown but it is recorded that it was destroyed by the Royal Engineers at stand down.

Built by the Royal Engineers, the site was chosen by “Stokey” Lewis. It was built in the dense undergrowth to the west of Scoveston Farm in the thickly wooded valley of Rhodal Bottom. The men always tried to approach the OB from a different route.

200 yards away was a one-man Observation Post linked to the main OB by a telephone link. 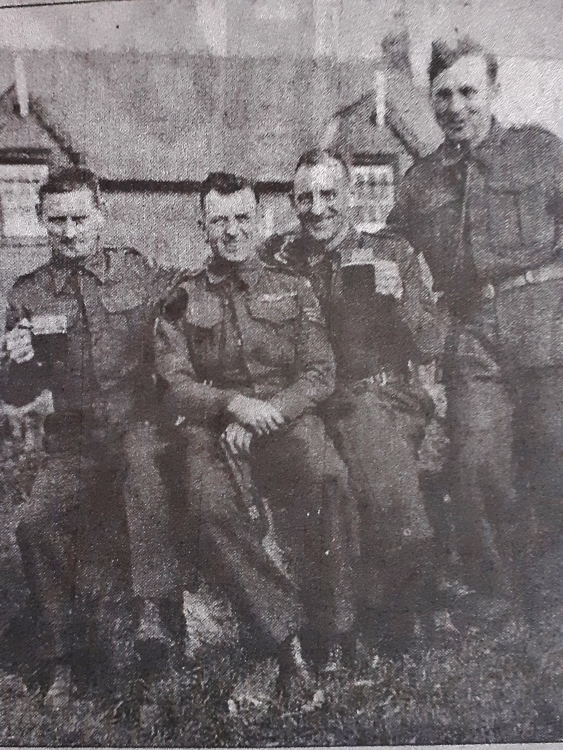 Caption & credit
Bill Kelly, Stokey Lewis, Frank Smith and Charles Shrives at Burton (from Roy Lewis)
OB Status
Location not known
OB accessibility
This OB is on private land. Please do not be tempted to trespass to see it
Location

The docks at Milford Haven would have been an important supply route for an invading army and the main road, A4076 leading north out of town towards Haverfordwest.

Sergeant “Stokey” Lewis attended courses at Coleshill and more locally at Carmarthen and Penally, where shooting competitions were held against other Patrols

Stokey trained his men well and taught them tricks such as ensuring their ears are left uncovered to detect even the slightest noise. Water bottles were to be kept full so they did not slosh with movement and they were not to carry loose coins or any letters or documents. He taught them to lay low if encountered by the enemy and never accept battle.

As part of a rehearsal for D-Day, Milford Patrol took part in a mock landing at Saundersfoot and Wiseman Bridge. Charles Shrives of Milford Haven Patrol was involved in this exercise and recalled : “We operated with the Stepaside Units and saw Winston Churchill viewing the landings. One of the members of the Stepaside group happened to mention to his mother that the Milford V.C [Sergeant Lewis] was training with them. She pleaded so much to meet the V.C that Stokey had to make a short visit to her home”.

When trained by the "Commandos", Stokey would always take them to his home for a meal.

While exercising with explosives on one scheme, a thrown charge with a short time fuse hit some barbed wire. As it rebounded towards the section the men all ran. Stokey calmly walked forward and hurled the charge into the nearby pond.

The Patrol stockpiled their arsenal of weapons in their homes. It is assumed they were issued with the standard kit, arms and explosives.

As the Patrol were excused from duty of the Home Guard road blocks around Milford, others became curious as to what the men were involved with. Stokey impressed upon his men that they should insist their work was secret but very dull and uninteresting. If accused of not pulling their weight they should not try to justify themselves and if cornered they were instructed to “play the idiot boy”.

In Sergeant Lewis' memoirs it is recorded that a Mr Robert Green, a much respected townsman, fish merchant and British Legion member was the first local Intelligence Officer.

The Story of Stokey Lewis by Walter Ireland