Perranporth is a small seaside town on the north coast of Cornwall and 7 miles north west of Truro.

The first Operational Base was located at Cligga Head which is north of Perranporth (locally known as Trevellas) Aerodrome. The OB is located on part of The South West Coast Path which is a National Trail so there is open access. It is now a Site of Special Scientific Interest.

The Noble Company mined wolfram on the headland during the First World war to produce nitro-glycerine. In 1936, J.R Hockin's guidebook describes the head as having “empty, turfed up, dynamite tanks, an abandoned lorry and one or two quarries”. The old Nobel's explosive tunnels that were used as the OB were on the cliff top edge looking out over the Atlantic to the west of Perranporth. The many earthworks left over from the mining process in the area could have provided good cover for entering the OB and escape. The tunnel is approximately 10ft high and 20ft long with an entrance / exit at either end. The Patrol made beds out of wood and wire netting.

The Patrol made use of one of these explosive storage tanks or tunnels to create their first OB. The tunnel would have been much more covered than it is today though when the nearby Aerodrome opened it was decided that it was too exposed and the OB moved to a new location.

In an attempt to keep this OB viable the Patrol actually put up signs warning that the area was mined. A young courting couple from the Aerodrome had a shock one day when, ignoring the sign, managed to set off a thunder flash. The Patrol moved to Reen Manor Farm after this.

The second OB was concealed within the decaying remains of an old tin and lead mine on high ground looking over the village of Perranporth and the Atlantic beyond. Located at Budnick Mine, Reen Manor Farm was a Nissan Hut approximately 14 foot by 20 foot placed in a dug out prepared at night by the Royal Engineers. It was close to the old mine stack which was used as one escape chamber, the other coming out in the old mine shaft.

To reach the entrance the Patrol had to go through bushes and draw back a long bar, which was attached to a trap door covered in grass turf. Metal rungs lead 10 foot down to the single chamber where wooden bunks were made and all the explosives and ammunition stored along with general provisions.

The mine shaft and OB have both been destroyed and filled in after the farmers tractor wheel fell into it during the 60's. Only the lower part of the engine stack of the original mine works remain that would have been an escape route. 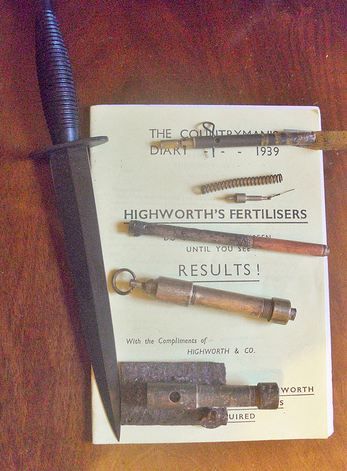 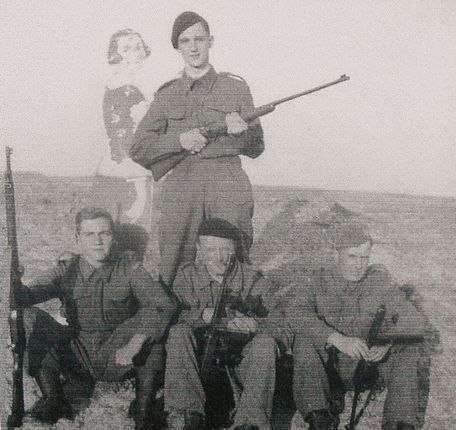 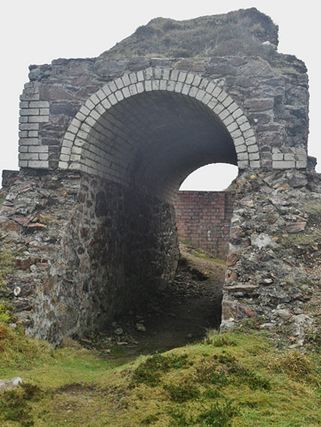 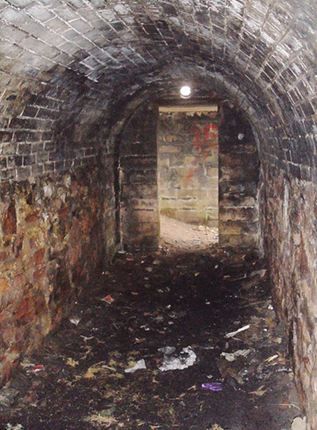 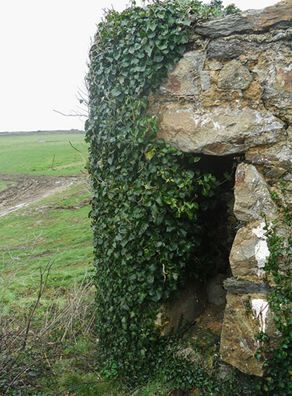 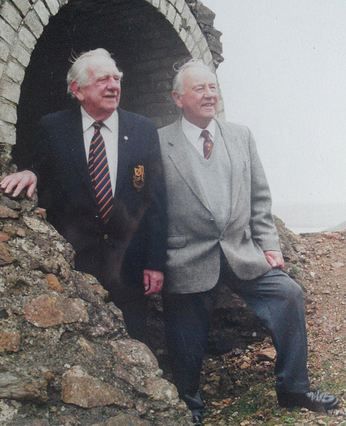 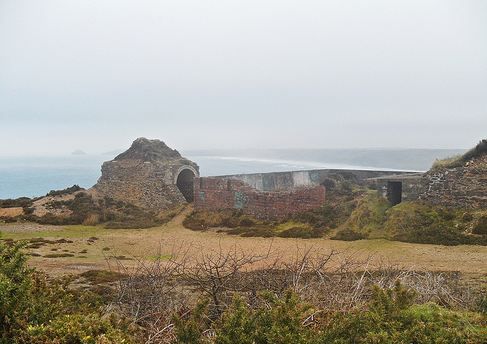 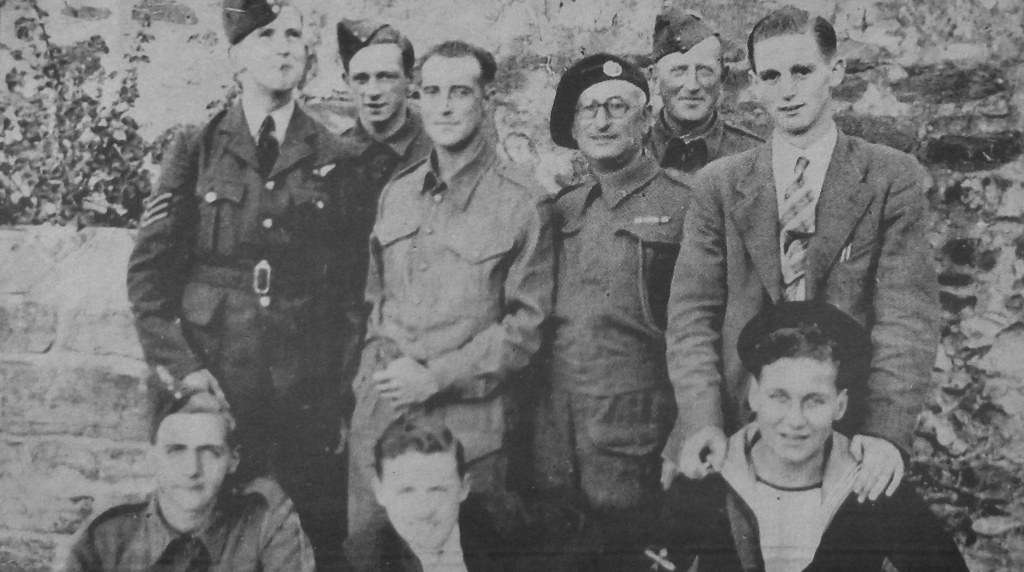 A known target was Trerew Radar Station on the A3075, the main road to Newquay. Arriving at night, the Patrol cut through the barbed wire and made it through to the main compound which was built into a big earth mound. Almost free to roam, they were well away before the thunder flashes went off in a mock “blowing up” of the station.

Though on private land a public footpath runs close by the remains of some of the radar station.

Perranporth (Trevellas) Airfield was a Spitfire station during WW2 and English Heritage considers it to be one of the most important remaining airfields from WW2. In its early days at Cligga Head the Patrol used this area for rifle practice. RAF Perranporth became operational in 1941 and decommissioned in 1946.

Perranporth Patrol did not train with any of the other local Patrols in the area. They trained themselves around the woods, dunes, beaches and cliff tops of Perranporth. The picture of them with the rifles was taken at Cligga Cliffs. Standing is Laurie Griffiths. Sat left to right is Edgar Mitchell, Sergeant George Tamblyn and Len Connett. The woman was a carboard cut out taken from a shop display. Trevor recalled she was shot many times !

Told that they had to test the defences of the Airfield the Patrol mounted a night time raid on the Spitfires parked in the landing bay. Their mission was to leave stickers on the tail of each plane to show they could have set explosives there if inclined. They easily managed this without being challenged by any security as they had entered the Airfield via the cliff edge rather than the heavily defended land side.

One night saw the Patrol crossing the sand dunes of Reen, Gear and Penhale Sands. The whole area was used for tank training, making the area of Gear Sands a prohibited area crawling with soldiers. The Patrol crossed this area and cut their way through the coils of barbed wire surrounding Penhale Army Camp. Making their way through the camp, past the barracks they came out at Holywell Bay. Sergeant George Tamblyn knew a Mrs Dust who ran the local cafe. She would be called upon to cook the Patrol bacon and eggs, a real treat in the days of rationing, before making the 5 mile return journey back through the Army camp and across the dunes home.

Trevor Miners recalled: “I suppose our antics got some people in trouble for being so lax, but I bet they sharpened up after”.

One evening the Patrol were destined for Church Hill between Perranwell and Perran Church. Taking with them a new explosive fuse, the object of the exercise was to learn how to block roads by blowing up nearby trees. Trevor Miners often wondered what the people living nearby thought of all the noise.

Trevor Miners remembered himself and Edgar Mitchell being sent on courses to Coleshill, Wiltshire arriving by train at Swindon.

“We were told to report to the Post Office and ask for Mabel. She checked our credentials and when satisfied arranged transport to take us to H.Q. We were trained in the use of all types of explosives: phosphorus bombs that you could not put out, Molotov cocktails and booby trap devices. We were shown how to use magnetic clamps fitted with gelignite and attach them to tanks or a railway line just to cause as much disruption as possible”.

He remembered the rough and tumble of learning unarmed combat and having to “hit the ground” many times when practising with sticky bombs. One time when they had to take evasive action was while they were throwing phosphorus grenades in training. Trevor recalled Edgar Mitchell's arm gave out as he threw one resulting in the grenade falling well short and too close for comfort. Night exercises were made more interesting by some of the guards dressing in German Uniform.

Armed with detonators, the Auxiliers were given an object to destroy within a certain time, a sharp whistle blast would signal their time was up. Trevor admitted that he may have only succeeded in his mission after the whistle had blown.

Trevor Miners recalled being given a .38 Smith and Wesson along with a Commando knife, both of which he carried around with him at all times, carefully concealed. He also remembered many different explosives, 2 Sten Guns, .22 snipers rifle with silencer and telescopic sights. Different colour time pencils, each colour depending on how long the acid took to burn through the wire, which he still remembered in his 80s. These along with garrotting wire were all kept at the OB.

Water purifying tablets, three weeks supply of food and rum rations were all handed back at stand down.

At some stage a large number of phosphorous bombs had become dangerously unstable so the Patrol took them to a remote part of the cliff top where they stood the bombs on end. “We fired at them” said Trevor, “with our .22 rifles, made a fantastic firework display. Some fell into the sea but we had no other way of getting rid of them as they were so unstable”.

The small group photo shows; Edgar Mitchel, George Tamblyn and Len Connett with Laurie Griffiths standing. Thought to be taken in 1942. Taken around Perranporth (Trevellas) airfield. The “lady” was a wooden cut out taken from a shop and used as target practice.

Trevor Miners was hugely influential in making sure the Auxiliary Units story was remembered.

The late Auxilier Trevor Miners and his family.

Page Sponsor
In Memory of the late Trevor Miners

Trevor of Perranporth in Cornwall was hugely influential in remembering Auxiliary Units.