The village of Raydon lies 2 miles south-east of the market town of Hadleigh.

The OB site is located in a long-disused sandpit on private farmland, which was accessed by kind permission of the landowner who discovered the OB site during tree clearance work. During the 1940s the whole area was populated by mature trees, many of them Elms that later fell victim to the Dutch Elm disease and have long since been felled.

The entrance shaft has since collapsed. The corrugated sheeting lining its earthen walls can still be seen at ground level. The main chamber has silted up and much of it has collapsed, leaving a small cave-like area behind one of the sidewalls which can be accessed through a hole in the wall where corrugated sheeting is missing.

Much of the corrugated sheeting that forms the roof and lines the earthen sidewalls is still in place, some of it is badly corroded or has deteriorated. The roof was supported by sections of railway line or disused Ipswich tram line, resting on a variety of sturdy posts, one appearing to be a telegraph pole. The corrugated sheeting lining the walls is held in place by a wooden frame.

A glazed ceramic field pipe protrudes from the ceiling at an angle, no trace could be found of its exterior end and perhaps it has slipped further down into the soil when the structure collapsed.

A tin pipe of about 7.5 cm diameter is still in situ beside the collapsed entrance shaft. It appears to run all the way down the wall within the main chamber. Extending upwards and through the roof, its exterior end is capped with an elbow, also still in its original place by the entrance shaft. Presumably it served as a flue pipe for a stove that the Patrol kept in their OB. Layers of sand have trickled into the chamber over time, covering what may still be in place at the original floor level.

The OB is a flattop construction that in all likelihood was built by the Patrol members themselves, using a variety of materials available to them: sections of railway line, wooden timbers and posts, corrugated sheeting and what appears to be a length of telegraph pole.

According to Mr A Johnson (son of Patrol leader Sgt Dennis Johnson), who played in the OB as a child, it's entrance shaft was lined with corrugated sheets and had rungs nailed across the corner supports. The OB had an approximately 1.20 x 1.20m square and about 1.20m deep hole in the floor which was used to store small quantities of ammunition and fuses etc. The Patrol’s main ammunition store was situated in another disused pit about 500 metres further to the north-east. Mr Johnson also mentioned that there was an emergency escape exit on the upward slope and a very short passage that adjoined it.

The OB was recorded in 1996 by volunteers of the B.R.O Museum in Parham and described in their files as partially collapsed, with a large area of the main chamber, including an air pipe, still in place.

According to information lodged at Defence of Britain the OB has been destroyed (recorder: Dr Will Ward, 1997).

Neither B.R.O.M nor DoB mention the existence of the Patrol’s Operational Post or their ammunition store.

The Patrol's Observation Post was situated 65m due east from the OB in what at the time would have been the upper edge of mature woodland, immediately inside a modern stock fence that was erected along the field/woodland boundary. The OP was a square dugout of approximately 1.20 x 1.20m, originally hidden within a large hollow tree trunk of approximately 2.40m height and discovered by the landowner only after the tree trunk had deteriorated and fallen on its side. A small part of this trunk remains in situ.

No trace remains of the Patrol’s ammunition store which was situated about 500 metres further to the north-west in another disused pit. It was approximately 1.50 x 1.50m square and dug approximately 1.80 m deep, with a flat roof constructed from corrugated sheeting. 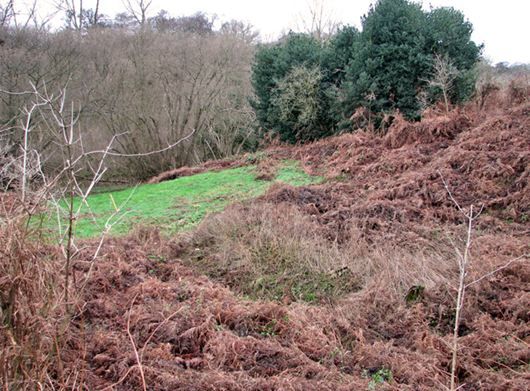 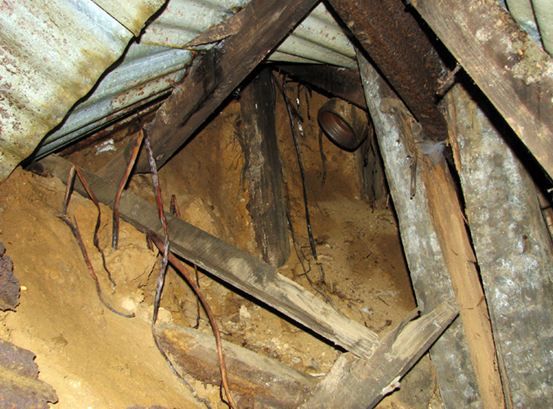 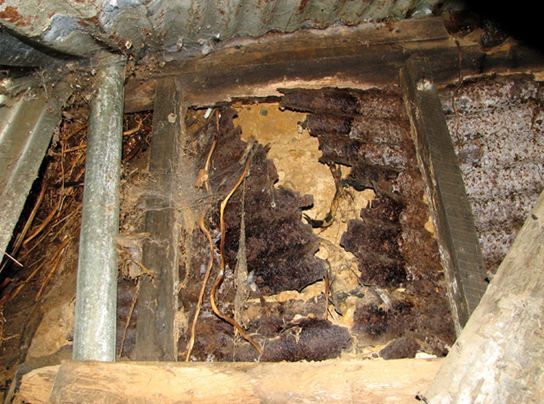 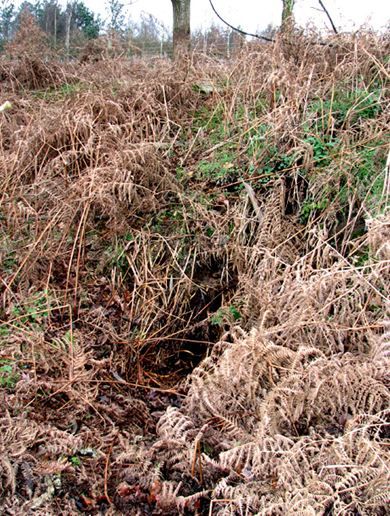 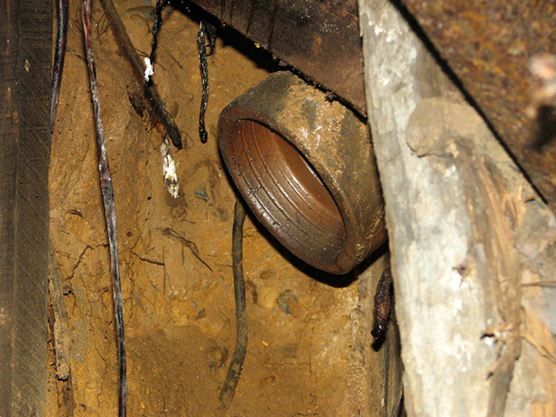 Caption & credit
Raydon Auxiliary Unit Patrol OB vent pipe
OB Status
Collapsed with some visible remains
OB accessibility
This OB is on private land. Please do not be tempted to trespass to see it
Location

Targets would have included Raydon Aerodrome along with railway line and bridges in the vicinity, and the railway siding that was especially constructed, running from the Hadleigh Line into Raydon Wood, delivering whole and disassembled aircraft to the base.

The patrol trained locally in the disused sandpits in the vicinity of the OB.  “Attacks” on Raydon Aerodrome, a USAAF base during the war, which greatly displeased the staff there.

They had 303s which had been adapted (sleeved) to take 202 ammo for practice. A couple of Sten guns, Grenades, and each had a .38 Smith & Wesson revolver and a Commando knife. Sten or Thompson submachine guns, Fairbairn-Sykes fighting knives and .38 revolvers plus a variety of explosives, detonators and fuses would have been standard issue.

An old photograph on exhibit at the B.R.O. Museum at Parham – it is titled “Raydon Patrol” – actually depicts the members of Wenham Patrol.