The OB is situated on the eastern edge of a small woodland (Lonely Wood), a short distance to the north-west of Vale Farm, to the west of the village of Carlton near Saxmundham (in the parish of Kelsale).

The OB is situated at the very edge of Lonely Wood. It is aligned with the woodland edge, facing north east / south west, with its entrance shaft opening concealed by the thick, gnarly roots of the well established ivy plant growing right above it. The rectangular drop-down shaft was built from brick. Its upper rim is broken and sections of still bonded bricks are lying on top of the in-filled shaft. Rex Chaston recalled metal rungs leading down. A 4 inch counter weighted hatch was filled with soil and debris to disguise the entrance.

A short length of field pipe, aligned east-westerly, can be seen emerging from within the entrance shaft at 20 cm (approximately) below ground level.

The entrance shaft is adjoined in the south-west by a noticeable depression in the ground, created by the collapse of the structure. Both the brick end walls appear to still be in place and the ground here remains at its original level.

A small opening by the exit (facing downhill in south-south-westerly direction) reveals some of the underlying upper edge of the Nissen hut and bricks forming the end wall. From here the emergency exit passage, long since collapsed, led downhill to the valley of a small stream. Rex Chaston recalled this to be around 15ft long and 5ft high, high enough so the men could run through stooped, and with a store area midway on the left hand side.  He remembered it supported by pit props  The Patrol's water supply would come from the nearby stream

The original OB was rebuilt/improved by the Royal Engineers in order to provide additional ventilation after the Patrol noticed lack of oxygen when they tried to light the Primus stove to make a cup of tea. On inspection of the work the Patrol's kit was also inspected and an inquest followed after it had been noticed that the seal on the rum jar had been broken.

Ralph Dye recalled there were bunks in the OB. 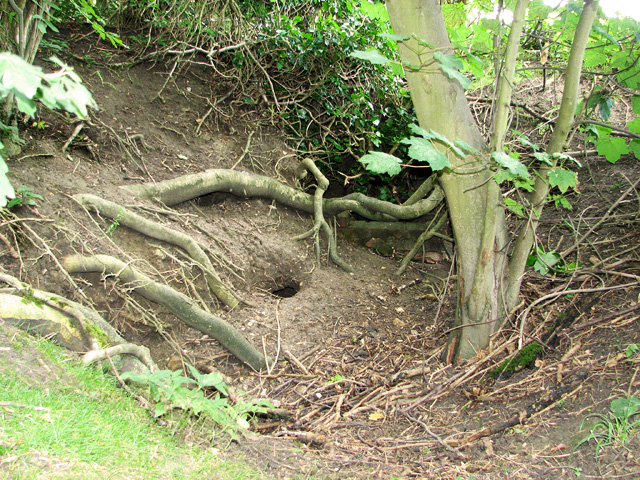 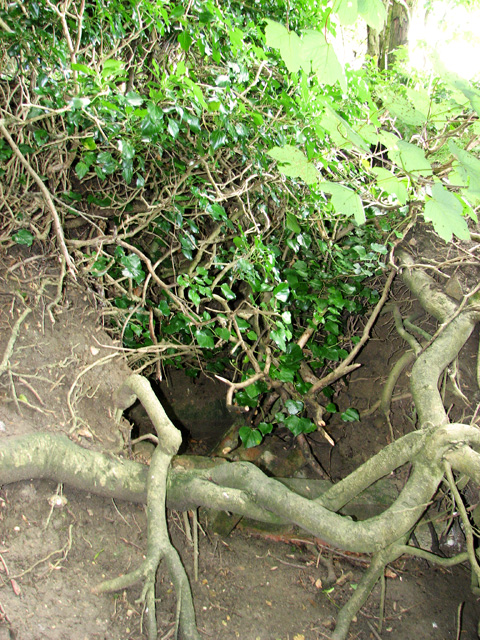 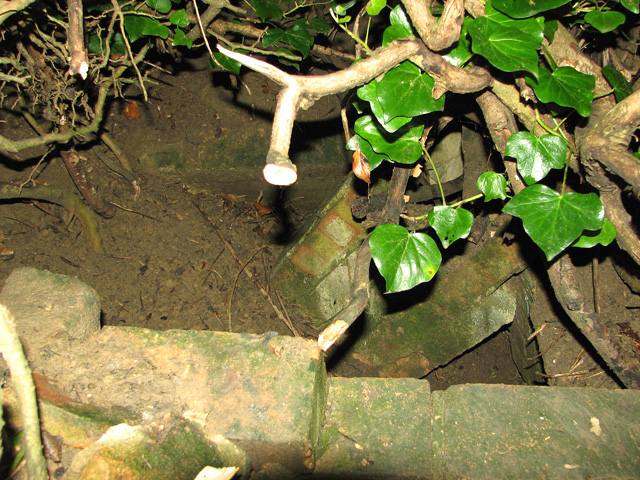 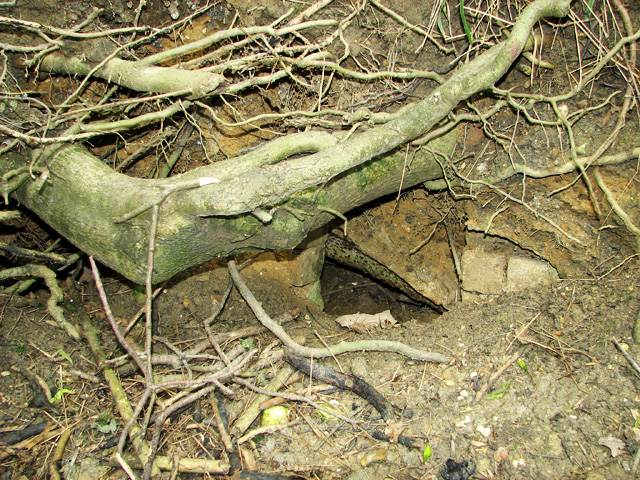 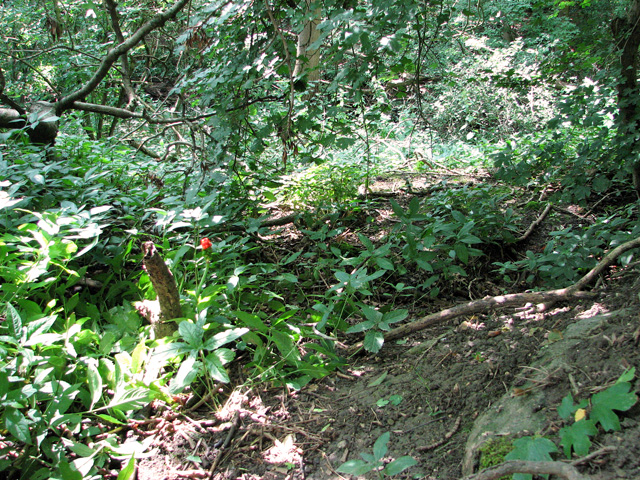 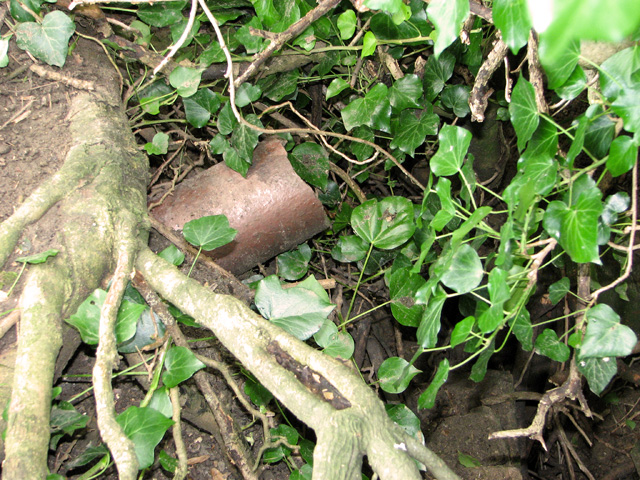 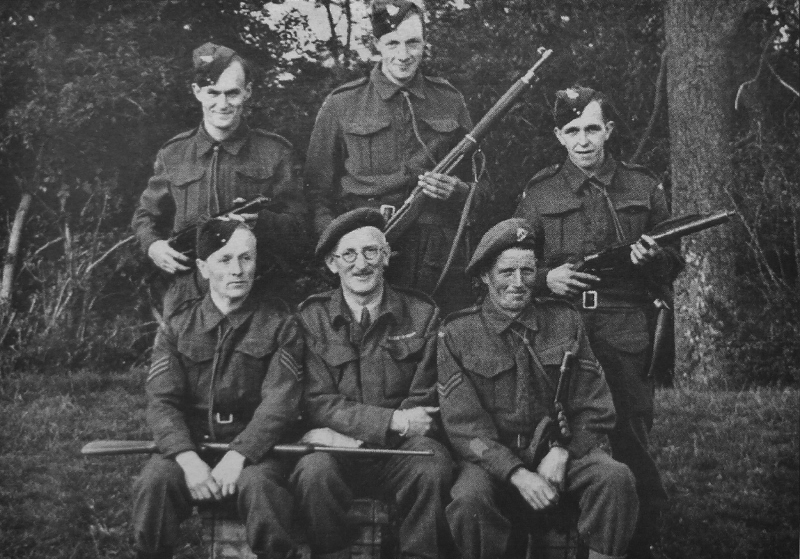 Rex Chaston remembered training with the Scout Section at Mill House, Cransford and felt like everyone was 'feeling their way'. They were trained by using everyday objects such as syrup tins to make bombs and booby-traps. They devised their own trip switches. Rex and Sergeant Woolard went to Coleshill to train. They travelled by train and were picked up by truck from the train station.

They mostly trained in the local woods some distance from the OB. The Patrol made head and shoulder pop-up targets for shooting practice. Rex could only remember one exercise with another Patrol (Leiston) where they went to Sizewell to blow up a tree.

Rex Chaston recalled they all had a Smith & Wesson or a Colt.38 and a commando dagger. The Corporal had a .30 rifle and the Sergeant had the Thompson sub machine gun. The Sten gun was kept in the stores having been modified to fire a single round. He also remembers gelignite, plastic explosives, detonators, phosphorus bombs, three types of fuze and horseshoe shaped magnets along with a jar of rum.

After stand down the phosphorus was poured onto farmland near the OB. The next season the field caught fire behind the plough. Hand grenades were tied together with fuze and pushed down a rabbit hole. The Royal Engineers picked up the rest of the arms and explosives.

Rex Chaston was interviewed in 1997 by John Warwicker for the British Resistance Organisation Museum and talks about the OB and the role of the local Auxiliary Unit:

Volunteers from British Resistance Organisation Museum at Parham, in 1996, found the OB in collapsed state and on re-visiting in 1998 noted further damage to the brick entrance shaft.

The Patrol continued, fully equipped, right up to stand down. Rex Chaston recalled they expected no instructions or help after invasion. At stand down Captain Moncrieff met the Patrol for a pint at the local pub.