The villages of Sproughton and Burstall lie just to the south-west of Ipswich.

The somewhat vague description of the location given by B.R.O.M at Parham, according to which the OB was situated ‘near Bullen and Round Woods’ is incorrect - the OB site is located about 5 metres within the western edge of Round Wood, approximately 50 metres north of its boundary with Elms Grove (locally known as Elbow Wood).

The OB is located on private land and was accessed with kind permission of the landowner.

The OB is situated near a woodland’s edge a short distance away from a footpath. During the 1940s the land was owned by Burstall Hall and the woodland surrounded by horse pastures. The OB is described as having been a fairly large affair apparently consisting of two adjoining Nissen huts. Mr Fiske, who kindly took us to the OB site, described to us that the second chamber was aligned at right angles to the first and connected with it by a short passageway. The main chamber had a drop-down entrance shaft and an emergency exit passage lead off at an angle. The structure has long since collapsed and the depression was filled in by the farmer about 20 years ago, effectively blocking access. Sweeping the site with a metal detector confirms that the structure is still in situ.

Only a very shallow depression remains on the ground. We found a glazed ceramic vent pipe still in situ, emerging to ground level from in-between gnarled tree roots which are in the process of crushing it. 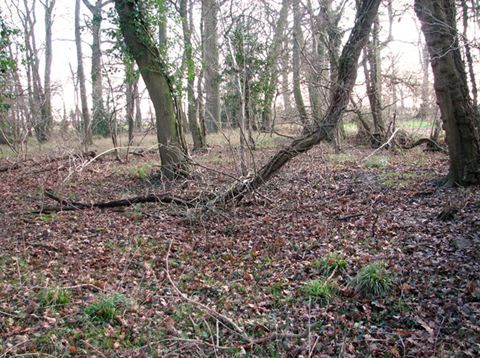 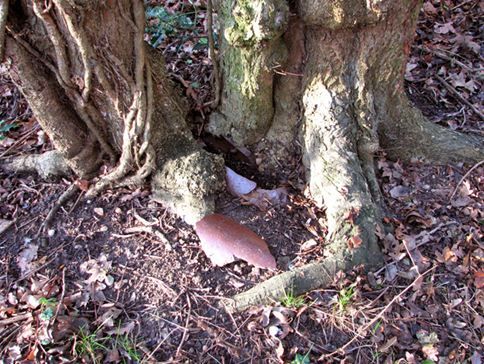