The original Scout Section in Kent was formed from the Lovat Scouts. However their commanders were very keen to keep the regiment together as it had been used piecemeal in World War One and were unhappy with the Kent section being detached from the main body of the regiment in the Faeroes. It appears that they were replaced by the London Scottish, though two of the Lovat’s NCOs remained behind as part of the training staff.

Oddly, none of the accounts of Auxiliers mention the London Scottish, though photos exist that appear to show men of this regiment at the Garth, and a London Scottish officer would later become the Intelligence Officer for the area. Possibly as a regiment with Scottish traditions, they were confused by the southerners with the Lovat Scouts, who are frequently recalled, or else had very little to do with the Home Guard patrols. The London Scottish was both a local regiment, but also part of the regiment was transferred to the Royal Artillery, which explains the unusual presence of Royal Artillery Officers in command. Details of this unit are limited and we would welcome any additional information.

The Scout Section was made of Regular Army soldiers with a Lieutenant in command. Their role was train the Home Guard patrols, but also to go to ground themselves in the event of an invasion.

Caption & credit
Captain Peter Fleming (centre) with the Lovat Scouts (in dark Atholl Bonnets). Richard Fleming to Peter’s right and Captain Mike Calvert to his left. Two RAF signallers in the front row, and two ATS sat down behind them. (A Westwood)
Image 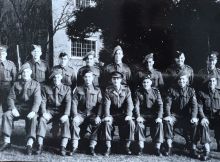 Most Scout Sections would have at least two OBs. It is not known if the London Scottish had their own, though the famous "Airship Hole" OB was close to the Garth and could have accommodated the whole section.

No personnel posted to this Scout section.

A photo of this section shows 15 men, with the two Lovat Scouts, Sergeant McDonald and Corporal McKenzie as the NCOs, with a Lance Corporal from the London Scottish with 6 others in Balmoral bonnets. Two men have coloured Field Service caps and two General Service caps, with one RASC driver. Lieutenant Platten is the officer present.

The precise transport for the section is not known. Most Scout Sections had a 15 cwt truck and an Austin 2-seater car for the officer. They were normally issued with bicycles as well.