Bideford is an historic port town on the estuary of the River Torridge in North Devon.

The Auxilier's addresses and their bases are all on the East side of the estuary of the River Torridge in East the Water.

In an oral account, taken in 1995, and stored on the Defence of Britain Database it is recorded that there were three Operational Bases and a bomb store used by Bideford Patrol. It is not known if all OBs were in use at the same time or if each was discarded after being compromised and a new location sought.

Louise Howell, a researcher contributing to part of Bideford 500 conducted interviews with an Auxilier's son who wishes to remain anonymous. He is known here as "D".

Operational Base One at Eastwood

This OB was destroyed some time after the war ended. It was located on the edge of a small copse at Eastwood, to the west of what was formally Parsons Farm owned by Auxilier Reginald Chave Parsons. It is thought he put up a poster in the area warning of prosecution of entering due to mushroom cultivation but it is known he never grew mushrooms.

Operational Base Two at Pillhead Copse

Pillhead Copse is to the north east of East the Water. Parts of the area have been used for landfill over the years so it is assumed that any remains of OB materials are long buried. This OB was also destroyed after the war. The OB was known to have been accessed via a shaft through the remains of a hollow tree trunk stump.

Operational Base Three at Stone Farm

Was sited in a old quarry on the edge of a copse to the south west of Stone Farm. The OB was destroyed after the war. The size of the OB is unknown but it is known that the entrance was concealed by tipped rubbish.

Bomb Store at Cleave Wood Mine (or Paint Mine Woods)

Within the old mine and quarry workings at Cleave Wood Mine there was a bunker used as a phosphorus bomb store. It is known to have been blown up and filled in after the war.

One substance mined there was a stiff black clay known locally as Bideford Black and as this was chiefly used to make black pigments – hence the name ‘Paint Mines’. Bideford Black is probably most famous now for being the source of the black paint used for coating the hulls of sailing ships in the 18th and 19th Centuries. However, all sorts of other products were later made from it, including tank paint, colourings for rubber boots and even mascara !

Reginald Parson's family recall there were arms and ammunition stored at Eastwood Dairy Farm. A wood and iron store and one time church, called Port Mission, was owned by the Parson's family. Young family members were told to make their way there in times of trouble as they would be safe in the little old church. Arms and ammunition was thought to have been stored in the crawl space under the wooden floor. The 1980's sales details can be seen here.

D was a young boy of 10 when his father told him about him being in the Bideford Auxiliary Unit. His father took him to where two of the three OBs were located, however D was unable to pin point their exact locations. He was able to recall them as having been located at Cleave Wood and Eastwood and he believes that one of the three locations is still in the same family ownership.

After the war, each unit had been instructed to remove all evidence and completely destroy the OBs, which D says did take place in Bideford. He is certain that they had all been totally demolished some years after the war had finished. 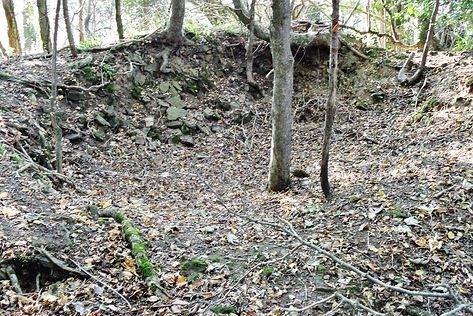 Caption & credit
Operational Base One at Eastwood
OB Image 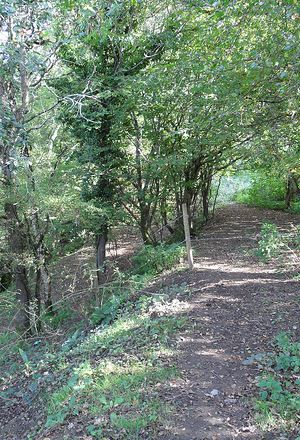 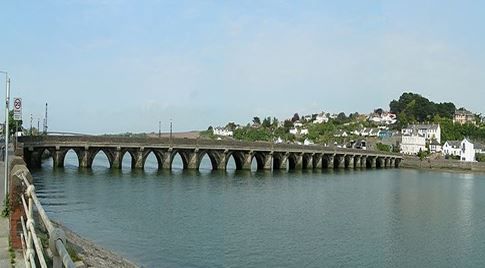 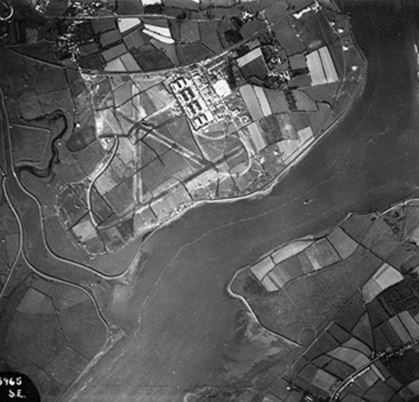 Caption & credit
A wartime aerial view of RAF Chivenor next to the Rivers Taw and Caen. IWM
OB Image 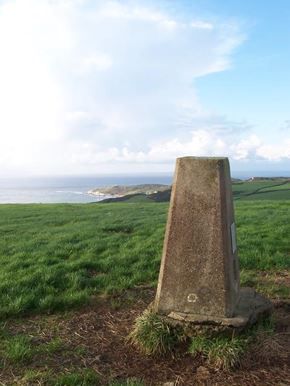 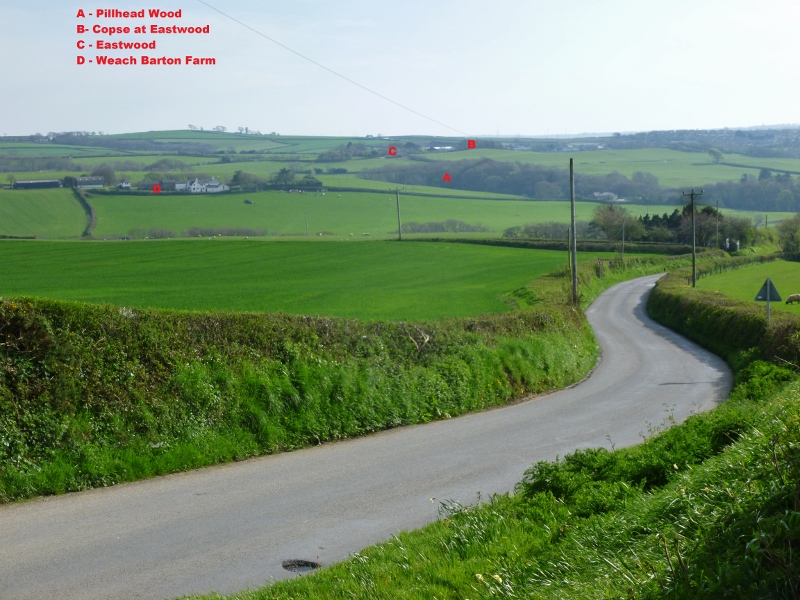 OB Status
Destroyed
OB accessibility
This OB is on private land. Please do not be tempted to trespass to see it
Location

Bideford's Long Bridge, a stone bridge of 24 pointed arches, must have been an obvious local target along with RAF Chivenor which was a target for all of Group 1.

A particular event D's father liked to recount was when he had been involved in a specialist operation to invade RAF Chivenor and gain control of the Air Control Tower. All the other North Devon Patrols were involved in this raid and all had different targets on the base. Where the outcome is known all were successful. As the Patrol made their way through the perimeter fencing and across the base, D’s father spoke of his surprise when he met some of the Home Guard defenders, who were work colleagues and friends of his.
Unaware of the Patrol's intentions, the Home Guard simply let them through the various security points.
The regular troops however, proved to be more difficult and the Patrol did actually have to draw on their stealth and camouflage skills before their mission was a success and they finally took control of the Air Control Tower.

The RAF base had been provided with security from both the regular army troops and also members of local Home Guard battalions.

It is known that the North Devon Patrols trained at Stevenstone House, near Torrington. Though in a ruinous state the house was just about habitable as the Warwickshire Regiment and later American troops were stationed there.

It is assumed that the Patrol would have access to the standard Auxiliary weapons and explosives along with regular equipment.

D recalls that his father had been issued with time pencils, a revolver and a knife. Rubber soled boots and a rubber truncheon were issued for ‘silent nights’ as they made less noise. It was considered that a rubber truncheon would not make as much noise when making contact with a person’s head !

Due to the secret nature of the Auxiliary Units, neither D’s mother or sister were ever aware that his father was a member of this secret organisation. Nor were they aware that father stored his issued weapons and some other items in various sheds on their own land which was very close to one of the OBs.

D thinks it could have been the Police that were told to remove any hidden incendiary and booby trap devices after the war. Due to their clever concealment, many were left undiscovered in the original clear up and D and his father, on quite a number of different occasions, came across them many years later.

D explained how his father's uniform was similar to that of the Home Guard. He stated that they were issued with a small badge to wear on it. He could be referring to the 203 arm title though this could also be being confused with the post stand down enamel badge worn after the war.
He thinks this would have identified them to those who were in the know but to the uninitiated they looked like any other Home Guard member.

Most of the men were recruited from existing volunteers in the 5th Battalion (Bideford) Home Guard, many being from 'C' Company. All apart from Johns and Ayre were originally registered on the 5th Battalion Home Guard rolls. Against the Patrol members names on Home Guard records is written that they were 'taken off strength' from their platoons and were 'to be considered on Battalion HQ duty'. A note was made against some of the names of 'M.A.U' which is understood to stand for 'Member of Auxiliary Units'. Most of these notes are dated 1942 as this is when The National Service Act was introduced, making enrollment compulsory, and an order was issued that Auxiliary Units would be designated as Home Guard Battalions. It is assumed this was recorded to explain their absence from regular Home Guard duties.

In a handwritten diary for 1944, Reginald Chave Parsons has briefly listed his operational duties for that year. One of the entries in October reads "to Stevenstone House, Torrington to make film of the work of the Unit". Then in November a further entry reads, "to Braunton for party re disbanding of unit and to see the film". It is unknown if the film still exists.

Louise Howell who kindly allowed her research to be used.

The family of Reginald Parsons.