County
Norfolk
Supporting regiment
The Bedfordshire and Hertfordshire Regiment
About

Like most large counties, Norfolk had two Scout sections. The West Norfolk Scout Section was provided by the Bedfordshire and Hertfordshire Regiment. This account is largely based on the recollections of Jim Watson, who recorded them for the British Resistance Organisation Museum at Parham in Suffolk. He served from its founding to disbandment.

All the members came from the 2nd Battalion, The Bedfordshire and Hertfordshire Regiment which had just returned from Dunkirk and was reforming at the Regimental Depot at Kempston in Bedfordshire. A notice was placed on ‘Daily Orders’, asking for volunteers for a secret operation and all the volunteers were personally interviewed by a Staff Officer, perhaps Colonel Gubbins. The main theme of the interview was the men’s ability to live off the land. The men were also told that in case they were selected, the operation was definitely in England but no further information would be given until they had signed the Official Secrets Act.

It is known that at least some of the section attended the Scout Section Course at Coleshill House.

In 1944 the SAS specifically recruited men who had served previously in the Scout Sections.The SAS War Diary includes details of four men in 1 SAS, whose Army numbers mean that they originally served with the Bedfordshire and Hertfordshire Regiment. Two of those, Cronk and Jerrom, are among those named by Jim Watson as members of this Section, though Alcock and Smith have very similar Army numbers indicating they enlisted around the same time and would have been in the Regimental Depot when the Section was recruited. Currently these two men cannot be confirmed as Scout Section members, though it seems quite likely. 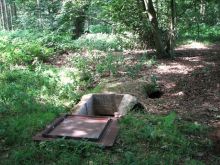 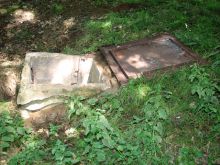 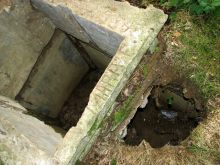 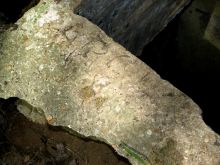 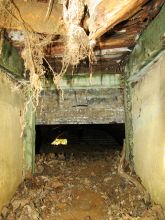 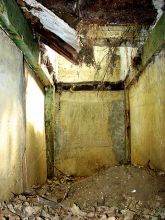 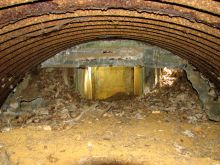 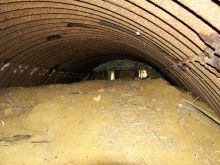 Scout Sections normally had at least two Operational Bases (OBs). Only one possible Operational Base has been identified near Anmer. The OB is located in a PRIVATE woodland.

After finding some intriguing information on the Internet which mentioned the recording of a WWII Auxiliary Unit operational base in the woods near Sedgeford Aerodrome, in 2009, by members of the Sedgeford Historical and Archaeological Research Project, Evelyn Simak contacted the group’s secretary. She kindly (and very promptly) put Evelyn in touch with one of the archaeologists involved in this project, Neil Faulkner. Neil passed on the contact details of their original source of information, Mr Peter Ward.

Contacting Peter by email, his initial reply was: “I and two of my school friends were looking for sweet chestnuts in the autumn of 1945/46, and found a trap door. We of course explored it, with a box of matches to light our way. We found a ladder in the centre which went into a hollow tree with a natural peephole that looked out over the common toward RAF Bircham Newton. We were rather scared at what we had found and did not mention it until a few years later.” Peter subsequently shared more information and we would like to take this opportunity to express our thanks for so generously and unconditionally sharing those memories of ‘his’ wartime bunker.

The OB is situated on level ground near the northern edge of Tofts Hill Wood. Although intact a site visit by Evelyn Simak found it filled with sand, caused by burrowing rabbits, with only a crawl space below the curved roof. Due to a large quantity of sand having trickled into the main chamber over the decades the surrounding ground has sunk.

During an archaeological survey conducted in 2009 by members of the Sedgeford Archaeological Research Project, some sand was removed from the emergency exit opening and also from small section of end wall in order to establish the original height of the structure. Entrance was via a drop-down shaft built of concrete. It has an estimated original depth of about 2.70m - due to the silting up of the structure it was not possible to establish the actual depth. Wooden posts and boards, painted green, supported the concrete walls.

Mr Ward also mentioned to Evelyn a ladder that led up a hollow tree with a peephole in it, affording a view across the Common and towards RAF Bircham Newton. She was not sure how to interpret this description other than that this hollow tree would have formed either part of the exit or of the entrance, although the description seems more fitting for a nearby lookout post.

During her visit she found the OB’s concrete entrance shaft covered with a steel lid and the exit opening uncovered.

The main chamber consists of a Nissen-hut type structure with a curved corrugated roof, covered with a layer of topsoil. Filled with sand to almost roof-height, it appears to be in fair condition. Mr Peter Ward remembers that the main chamber contained a table and chairs, placed in the centre, and what he now believes to have been bunk beds, lined up along the wall. Both end walls were constructed from corrugated sheets, held in place by wooden posts.

The emergency exit opening is situated in the SW corner of the main chamber. It appears to have been cut out of the corrugated sheets forming the end wall. Because of the sand that fills the main chamber to almost roof height the size of the entrance opening has been reduced to a crawl space.
An overgrown, trench-like depression in the ground leads away from it, further into the wood, in south-westerly direction. In all probability this was the emergency escape tunnel.

The Section is said to have had an Observation Post hidden in hollow tree trunk and overlooking RAF Bircham Newton of which no trace remains. Presumably the airfield at nearby Bircham Newton was one of their targets.

The section would have consisted of a Lieutenant, a Sergeant, a Corporal and 9 private soldiers with a driver batman for the officer and driver for the section’s lorry.

The precise transport for the section is not known. Most Scout Sections had a 15 cwt truck and an Austin 2-seater car for the officer. They were normally issued with bicycles as well.

Churchill's Secret Auxiliary Units in Norfolk and Suffolk, Simak & Pye. (Note–the sequence of service of the officers is incorrectly recorded in this book.)