Wrackleford is a small hamlet close to the village of Stratton, 3 miles north-west of Dorchester on the A37 main road.

The Operational Base (OB) had been thought to be at Quatre Bras, on the line of the Roman Aqueduct to Dorchester, but it is now known that this was incorrect.

The OB was in a small copse known as the Rookery in Wrackleford, owned by the Pope family and farmed by the Legg family. Norman Legg recalled being told as a young lad that he had to stay away from the area by his father while the Army were working. He didn’t see what they were doing but afterwards went back to the area and you could see that they had been digging in the ground.

This was an elephant shelter type OB. The entrance hatch was in the hedge line and a section of the hedge lifted up to allow access. The men were careful to approach the site along the hedge lines, so as not to leave a clear track across the fields approaching. The OB was equipped with a wood burning stove (the chimney venting up through the hedge line). They had a primus type stove for cooking and a paraffin lantern for illumination. Jack does not recall the Patrol staying overnight in the OB during his time with them.

Towards the end of the war, after the Home Guard had been stood down, Norman Legg with his brother and brother in law entered the OB. They found the hatch under loose beech leaves. They opened the hinged lid and went down the ladder inside. As many Dorset OBs have two vertical shaft entrances, rather than a long tunnel, it may be that this was the escape exit. They had torches with them and found a couple of bunks on each side, and beyond this were boxes. Inside they found some Mills bombs and Molotov cocktails (possibly AW bombs which came in glass bottles). They took one of the latter into the adjacent field and shot at it. They were amazed how far the flames spread and it was lucky that the field was recently ploughed as it would have set a field of stubble ablaze.

The site is on Private Land and was accessed with the landowner’s permission. The area is now occupied by a badger sett and no remains of the bunker could be seen. Jack pointed out the point in the fence line where the vent had emerged and there was a large upturned tin can buried in the soil at this point, perhaps covering the vent itself. 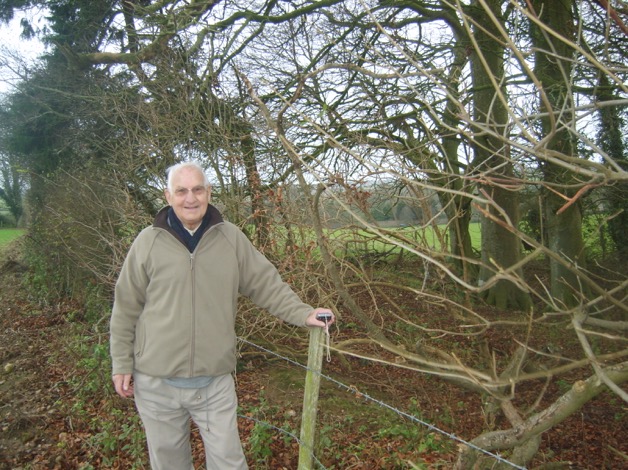 Caption & credit
Jack Northover at the site of the OB. The area immediately to his left is where the OB was buried.
OB Status
Destroyed
Location

According to Jack Northover, the aerodrome at Woodsford, RAF Warmwell, was a target. During an exercise, he and other Auxiliers crawled across the airfield in the dark, past the guards. They attached tags to the planes, all fighters, to show they were “hit”. The Commanding Officer was so mad that he cancelled all passes for a week! The same attack was recalled by members of the Dorset Scout Section.

Captain Gaunt taught unarmed combat. He was very strict about talking to others. Even Jack’s mother and sister didn’t know he was involved. You had to try and attack him with a knife, but the next thing you knew, you found yourself on the floor.

Jack recalled one day spent shooting in the wood with revolvers to use up ammunition. Normal Legg recalled seeing the men in the fields practising with their weapons, but more often just moving around the area.

George William Northover went to Coleshill. He recalled on his return that they had to run everywhere! You weren’t allowed to walk. He said that training was by some Commandos. He then showed his brother how to deal with explosives and silently dispatch a sentry.

The men were issued with fighting knives. Jack had a truncheon and .38 revolver. He also carried the Patrols only Tommy gun. The other men just had their daggers and revolvers and none of them had rifles. They had hand grenades and plenty of explosives, described as enough to blow up Dorchester!

After the war, Jack only kept one hand grenade (later correctly disposed of) though he still had the inert base.

They wore battledress with just Home Guard shoulder titles. But the local Home Guard knew something was different about them as they carried revolvers and daggers.

Some members of the Patrol travelled to Langton Matravers to guard radar facilities as part of the Auxiliary Units support to the invasion of Europe. Lewis Downton’s pass survives and shows that he was allowed to travel to the area on 3rd July 1944. The pass is signed by Lieutenant Wilshire, who was a Deputy Group Commander for the Weymouth area, but presuming was involved in this Dorset wide operation. Other Patrols were there at different times and the local Wareham Group also served here, including Sergeant Fred Simpson of the Creech Patrol and Ron Vallis of the Maiden Newton Patrol.

In 2017, a Memorial Stone was unveiled in Stratton near the village hall. The project was initiated and led by David Downton, and CART provided a large display in the village hall as part of the event. The last surviving member, Jack Northover attended and was interviewed for the media coverage.

Listen to Jack Northover and David Downton talking on BBC Radio Solent about the Memorial Plaque unveiling. Press play below.

See a TV spot from BBC South Today below.