In "The Last Ditch", Captain Stuart Edmundson, the first Intelligence Officer (IO) for Devon and Cornwall, recalled that he had set up the Patrols in his area before receiving any help from Coleshill. Two subalterns arrived first, shortly before the area was split into two. The rest of the Scout Sections arrived after this. The first Cornwall IO was John Dingley who was posted Scout Section Officer for Cornwall on 15th November 1940, which approximately dates the setting up of these two Scout Sections.

Many Devon Patrols came to the area for training especially in the region of the village of Thorverton, about two miles from the operational base. The Scouts used Pynes Weir on the nearby River Creedy to train Devon Auxillers.

In an interview with Walter Denslow (Bovey, East Devon Patrol) he recalls:

“...the most difficult job I had to do, they picked us up one night in army trucks, we didn't know where we were going. They took us down to a place called Thorverton...There was a hall there and seven Patrols met there, they gave us a map and on the map there was just North, South, East and West and just a red dot. Strange country, black. It was very difficult. I had to lead Branscombe [East Devon] Patrol, not my own and I led it to where I thought I'd found it, but they only had about half of us found our targets....

'Twas a British camp and we had to make out it was a German camp...there was a deep river there [River Creedy] and this Commando chap he said “you stay here. I'll swim across” and in the dead of the night he entered this black river. Anyway we got in and put the flash there and the time pencil and we got about 2-300 yards away when it went off. That woke them up...”

In early 1941 they were mobilised around the county as they trained Plympton Patrol on the South West edge of Dartmoor. Here the Patrol would have known the land better than the Scout Section. Certainly during 1941-1942 the training of Groups 2 and 3 in Devon takes place at Slade in Cornwood, the home of Captain William Falcon. Devon Intelligence Officer, Captain Edmundson stated that he "got a requisitioned place near Ivybridge, facing the Moors, for the Devons and Hugh Palliser [Devon Scout Section] moved in and arranged security and rations for the men. It proved to be a very good headquarters for them for the whole time I was in command". Cornwood Auxilier, Andrew Wotton also recalled; "Army men based in the bungalow built the base and helped train us". This all sounds like the area of Falcon's house, Slade and could prove a Devon Scout Section was based in the area at some stage.

As a fighting Patrol the Devon Scout Section were within 3 miles of the city of Exeter with all of its transport links as possible targets. At the nearby Cowley Bridge there are substantial rail links. The floods of December 2012 showed that damage to tracks in the area resulted in the total isolation of most of Devon and Cornwall by rail. 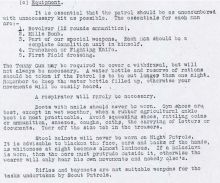 One Operational Base is located in Upton Pyne in the Pynes House Estate though much of the training was carried out around the neighbouring area of Thorverton which is around 3 miles West of Exeter.

Scout Sections normally had access to an Austin 2-seater car for the officer to use. They also had 15cwt lorry. A surviving toy lorry was built by the Devon Scout Section as a present for the son of their Intelligence Officer, Captain Stuart Edmundson. The serial number is even correct for a 15cwt GS Van, the term van in military parlance referring to a lorry with a fixed canopy on the back, which tended to be used for transporting stores. The fixed canopy prevented anyone reaching inside to steal the contents! The original toy is now in the collection of Parham Airfield Museum in Suffolk.

On one occasion Bill Maguire was driving the Austin with a consignment of small arms. He was in plain clothes and the only marking on the car was the vehicle number on white on the side of the bonnet. He was stopped at a military checkpoint, and detained as he could not provide a suitable explanation. Being in plain clothes, with an Irish accent, in a car full of weapons probably didn’t help his case with a country on the lookout for fifth columnists and neutral Ireland suspected by many of being somewhat pro-German. Unable to say what he was doing for security reasons, he was quite badly beaten up. He had provided a phone number to the lieutenant interrogating him for his captors to call, but it seems this didn’t happen until the next day. He was then released by a senior officer who seemed quite nervous about the consequences and asked nothing more of him.

Bill Maguire also recalled the Patrol using their bicycles when they went to the OB. They would all take different routes to avoid its location making the location obvious. The War Establishment for a Scout Section included folding bicycles, presumably so they could be taken down into an Operational Base.