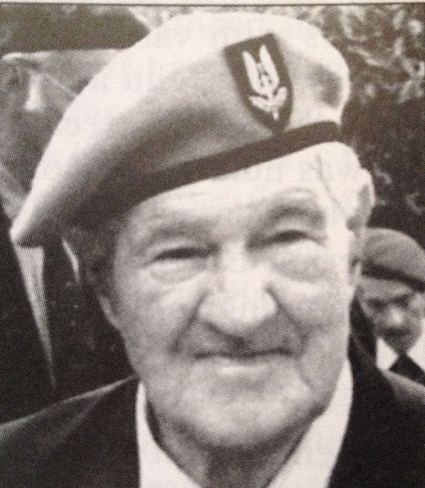 Bill Maguire was Lieutenant Bradford's batman. He had apparently enlisted in a Scottish regiment and seems to be wearing a Glengarry in the photo, though at the time he was serving in the Royal Army Service Corps. He was an Army child and had grown up in India, with his father and grandfather apparently serving in Irish regiments.

He was born in Omagh in Ulster and joined the Army on the outbreak of War, leading to his inevitable Army nickname. He went to France with the RASC and returned via Dunkirk in 1940.

He recalled that the Section often did not wear uniform, particularly if training. They made a point of staying away from Upton Pyne village so as not to be recognised after they went to ground by any of the locals. He was driver to Captain Bradford as part of his role.

When the Scout sections were reduced he went to an RASC unit with the 45th Division.

He joined Roy Bradford again in early 1944 as he became a member of the SAS, but wasn't with him when he died as he was on another operation at the time. After the war he returned to Devon and married a Thoverton girl, Nancy E Gilpon, at Tiverton in 1945.

After the war, he attended many reunions with the SAS Association.

David Blair/ Obituary in Pegasus, Journal of the Parachute Regiment