This was provided by the Welch Regiment, though unusually the officers seem to have come from other regiments. In the event of invasion they were to act as an active Auxiliary Unit from their OBs.

They were thought to be attached to Shepton Mallet Military Prison for their pay and rations.

Whilst training a Patrol, Lieutenant Keith Salter took some Auxiliers into Shipham Quarry to display his skills. “I found an old lorry dumped at the back and blew bits out of it to show all the different ways of immobilising vehicles. Some weeks later I was hauled up to HQ. They'd had a complaint from the quarry owner that a valuable vehicle had been wantonly vandalised. Did I know anything about it? I had to go down to the quarry office to apologise.”

Freddy Chapman remembered practice raids at RAF Colerne and Redlynch near Bruton home to the Royal Northumberland Fusiliers then later the Guards Armoured Division and after them, American forces. “We would have been shot had we been caught. Otherwise it was an extraordinary, exciting game we played”

The North Somerset Scout Section trained Auxiliers by running courses, initially over weekends, involving exercises usually at night, which including attacks on strong points.They not only ran courses at Cranmore but early on helped build some OBs and later went out training Auxiliers in their own areas.

In spring 1942 they were visited by Colonel Beyts and Lord Glanusk from Headquarters (Coleshill House). The Scout Section showed their visiting dignitaries an OB built for Longleat Patrol at which they were very impressed.

On 13 Aug 1942, Lieutenant Salter, the NCOs and Men of the Scout Section attended the funeral of Captain John W Hilliar, 4th (Frome) Battalion Somerset Home Guard. He had been killed demonstrating various grenades, when an anti-tank grenade exploded prematurely. It is not clear what relationship he had to the Scout Section. Unusually the men were noted in the paper as being from the Auxiliary Unit Scout Section.

An incident remembered  (only just!) followed a visit to Wedmore Patrol to inspect their OB. Francis Banwell, one of the Patrol members, took the men to The New Inn to taste the local cider. After some time, many of the men had to be helped into the back of the truck. As he was the Commanding Officer, Lieutenant Salter was helped into the passenger seat and the door closed before they set off home. When they got back, they found his fingers still shut in the door. The amount of cider he had drunk meant he hadn't felt a thing ! 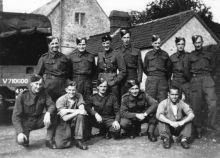 Caption & credit
Keith Salter in service dress is in the back row next to the tall Sgt Freddy Chapman. In the background is the platoon truck V710600, carrying the 490 (red over white) plate that identified vehicles of Auxiliary Units. (Keith Salter via Donald Brown)
Image 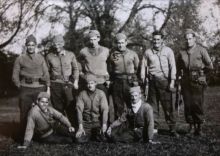 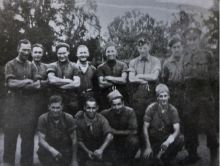 Operational Base One - Cranmore

The first OB was only remembered by Freddy Chapman, who was in the Scout Section from the beginning. It was not remembered by Lieutenant McCue so must have been abandoned by 1941 in favour of Doulting and later Creech Hill.

This first Scout Section OB was in Great Gains Wood to the North of Cranmore Tower with the Ops towards the edge of the wood. Access to the woods is available on public footpaths and bridleways. It is not known if this base survives. Freddy Chapman recalled that the OB was large enough for 10 bunks. Chapman remembered 1 or 2 Observation Posts, large enough for 2 men and connected to the OB with a field telephone.

Abandoned in favour of Creech Hill in mid 1941, this OB was built around the area of the railway embankment at Bramble Ditch south of Doulting. These sites are on PRIVATE LAND. It is not known if this base survives.

Described by Salter as being “very good” this large “25 man” OB was located on Creech Hill to the North West of the village of Bruton.The hatch for this OB was made by Ron Garnham and it slid up and down rather than tipping like most other hatches in the area. There is access to the area on public footpaths and bridleways. It is not known if this base survives. John Gadd, a school boy from King's School, found the Creech Hill OB while out checking rabbit snares. Seeing 6-8 men ahead of him walking up Creech Hill and disappearing into the bracken in the trees near the top of the hill, John decided to investigate in case they too had laid snares. Finding a trapdoor in the ground he immediately thought he had found a spies hideout.

The next day he told his friend John Bishop and at the weekend they decided to investigate. Finding the trapdoor, about three foot square and camouflaged with moss and bracken they managed to lift the hatch to look down a vertical shaft around 10 feet deep.The boys climbed down a few steps seeing a chamber made of corrugated iron and new wood but then lost their nerve and raced off to tell their Headmaster Rupert Martin. Mr Martin was said to have looked “thunderstruck” and making it clear to the boys it could be a matter of life and death he swore them to secrecy. John never talked of his discovery until the 1980's.

After the disbanding of the Scout Sections, Creech Hill OB could have been made use of by the Bruton Patrol.

As Chapman remembered this as a 25 man Elephant shelter this could have been considered as more of a “Group” OB as by this time Patrols were working and training together.

The full section would have consisted of a Lieutenant, a Sergeant, a Corporal and 9 private soldiers with a driver-batman for the officer and driver for the section’s lorry,

The photographs show that each man was issued with a revolver in a web holster and wore it with a lanyard. Tommy guns (Thompson Submachine guns) also feature.

Lieutenant Salter could remember having better equipment than the regular army including: rifles and Bren Guns and lots of ammunition, Thompson  Submachine Guns, .22 rifles with silencers and telescopic sights (not good when crawling around at night) and Bergen packs with steel frames.

The Scouts were supplied with an Austin convertible car for the lieutenant, a Fordson truck, a motor bike and Army push bikes which were heavy with back pedal brakes. They drew petrol from the local garage.

Freddy Chapman recalled, “We were asked one day who could ride a motor-bike. I said I'd sat on one, so they said, 'Go up to Highworth. There's a motor-bike to be picked up' So I went up there and got this motor-bike. The man said 'Are you capable of riding this bike?' I said 'Once I get it into gear'. So he said, 'Right, off you go then,' and I fetched it back down to Cranmore”

Donald Brown and his book Somerset vs Hitler.