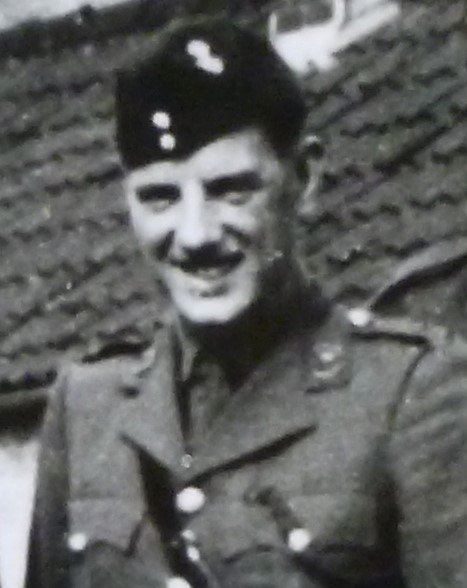 Lieutenant Keith Salter was in the 6th Battalion, Somerset Light Infantry as an Orderly Officer when he saw a letter from Captain Fenwick recruiting for a replacement for Lieutenant John McCue. The requirements were “keen on working alone and learning all about explosives”. Within a week Salter was sent to Coleshill House for explosives training then after a weekend at North Petherton (South West Somerset Scout Section) went on to Southill House. He was billeted at Lynnfield Guest House where he was well looked after by Mr and Mrs Gane. He served for a little over a year as Scout Section Officer.

When the Scout Sections were redcued in size,  Salter went to Somerset Headquarters, at that time at Bishops Lydeard, for a short time. Called to a meeting at Boodles Club in London he was told he was now part of Phantom (GHQ Liaison Regiment). He formally transferred on 27th April 1943. He was posted to D Squadron, commanding No.8 Patrol, landing in France on 6th June (D Day) with the 50th Division, one of the assaulting divisions on Gold Beach.

“One fought for one's own protection but our main role was to find out what was going on in the forward areas. We would go as far forward as we could and send back in high-grade cipher on the RT the information we had acquired. This meant extensive patrolling and I found my experience in the Aux Units very helpful there. I was very good at moving in the dark. I became a kind of specialist to the extent that they would say “Lets send Salter”.
We gathered information – took it back to Divisional HQ where my chaps encoded the messages back to Army HQ. I had a group of 7 men all from different regiments. All became highly skilled operators and encoders.”