The Station comprised a large wooden hut located about eight metres from the edge of Littly Wood - now a private woodland with public access, owned by the Wills Charitable Trust. Like many other above ground Stations it was designed to look like a Meteorological Hut and at the time it was surrounded by a barbed wire fence. According to Captain Ken Ward (based at Bachelors Hall), ATS staff was supplied with a daily weather forecast so as not to raise any suspicions in case somebody asked. Typically, the Station was situated on high ground, at approximately 130 metres above sea level, which is almost as high as anybody can get in the County of Suffolk. A much smaller building, presumably housing either the generator or a toilet, adjoined at the south-eastern corner.

The following information comes from an interview with Ted Knights, conducted by Dr Will Ward in 1999:
Mr Knights lived in a house near the Control Station site. The house had a washhouse in its garden which was used by ATS personnel for storing their bicycles. The ATS women were billeted at Dalham Hall and usually two of them would arrive in the morning and stay all day, to be replaced by two others at night. During times of heavy troop movements five of them would arrive. Mr Knights also remembered that occasionally a man called round in order to deliver water.

Mr Knights recalled that the hut was built from wood and stood on a concrete base. One day the Army arrived in trucks, with enough men to build two huts and they felled the trees that were absolutely necessary but left the remainder as cover. They then laid a concrete base and brought the materials required for building the hut in a couple of trucks. After completion, the compound was surrounded by a few strands of barbed wire on stakes. (Note: this would have been standard procedure: all camps housing ATS staff were surrounded by barbed wire even when located within a regular army camp.) After the ATS had left, Mr Knights went into the hut which he described as having been basically one large room with a toilet and a stove and a few windows. The hut had what Mr Knights thought to have been a pitched roof, with an aerial on top. The structure was dismantled and the components removed by the Army after the war.

The wood is described as having been felled in 1955 and replanted in 1966 but on occasion of our site visit we noticed that quite a number of old trees remain in place. Mr Knights was certain that there is no dugout in the woods – as he used to walk most days in the woods and was sure that he would have found it.

Marina Bloxam (taped interview) mentions a dugout somewhere near the hut, the entrance to which she describes as having been hidden under a gorse bush. She was one of the ATS subalterns who were based at Dalham Hall and for some time worked at the Ousden site, and she recalls having left their bikes in Mr Knight’s washhouse. Many of the details contained in her description, however, could not be confirmed and it is possible that some features were confused with one of the other sites where she also worked. During the time Les Parnell was based in Suffolk, for instance, Marina Bloxham was at Halstead (Essex) and his Royal Signals colleague, Cpl Arthur Gabbitas, remembers having met Nina Patricia Swan (nee Knapp), Margaret Buxton and Joan Barker but not Marina Bloxam.
Beatrice Temple recorded visiting the site in her diary; Mon 23 Aug 1943 Picked up Bettine and off to Ousden for billets search involved RAMC unit – naive old man in Domesday book house who had lost both legs and maid at Dalham Hall 4 miles off. Tue 19 Oct 1943 On to Ousden (Hazel and Gregson). It is last mentioned 31 Jan 1944.

We have seen two letters written by Les Parnell who was one of the Auxiliary Unit Signals maintenance men whose task it was to change the batteries and check the aerials at wireless stations in East Anglia. In one of said letters he agrees with Ted Knights in that there was no dugout at Ousden whereas in the other letter he thinks that there was one. Memories fade and for this reason recollections dating back many decades ought to be taken with a pinch of salt. Mr Parnell recalls that the aerial was up a tree, with the feeder cable hidden in a groove that was cut into the tree’s trunk and then covered over.

Two concrete platforms forming the bases for a large and a small hut remain. The condition is good but covered with leaf mould, overgrown and hence invisible. 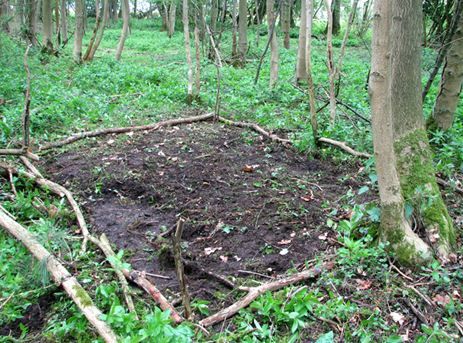 Interviews with Ted Knights, Ousden and Marina Bloxham, ATS (via Dr Will Ward);