Like most larger counties, Norfolk had two Scout Sections. The Scout Section for the east of Norfolk was provided by the Royal Norfolk Regiment.

Tom Colquitt was a former LDV/Home Guard, from Widnes, Cheshire. He provided a lengthy account of his time with the Scout Section which forms the basis of this report. 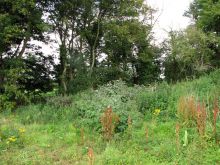 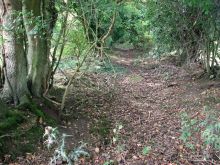 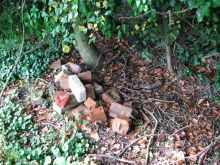 The Operational Base (OB) was located in the rear garden of the house, with its entrance disguised by a cold frame. The lid lifted and the floor came up, allowing access down a ladder. It was L-shaped with a flat double-skinned corrugated iron roof, and contained a number of bunks. There was a brick built section for arms and ammunition with a concrete roof and steel door. A two to three foot high escape tunnel ran 10 to 20 yards before coming up through a small hole in a copse. The OB contained a wireless set in a small area near the end of the escape tunnel, operated by the Section. Its aerial was run up an oak tree above the dugout, hidden beneath a V of bark, cut out and replaced over the wire. The antenna sat in the branches.

The site is located about halfway down the garden of Beech House, immediately adjoining the northern boundary of the property and a former public footpath (now closed). Before the purchase in 1998 by Mr and Mrs Waters of an area of land adjoining their garden, they pointed out to Mr Trafford, the landowner, an underground structure in the land they wished to purchase from him. Within days workers were sent in and the structure was destroyed. The Waters had believed it to have served as an air raid shelter during the war but had always wondered why it was so far distant from the house. Mr Trafford was also owner of Bear’s Grove Wood, where the Wroxham Patrol OB is believed to be located.

One of the demolition workers took pictures on his mobile phone. We would be very interested to see these pictures if they are still in existence.

A relative of Mrs Waters’ accessed the underground structure before it was demolished.
He described it as having had a flat concrete roof and brick-built walls with a size of probably about 5.50 to 6m by 3m, in a state of collapse.

A previous tenant, Mr T Brooke of Wroxham, also accessed the structure and described to us what he saw.
“It created a slight hump in the ground. Entrance was through a vertical shaft with rungs set into a corner of the brickwork. The main chamber consisted of a Nissen hut-type 5 - 6m long and 3m wide. It had only one room, the far end of which had collapsed and daylight could be seen. It was completely empty.”

Only a very overgrown depression remains on the ground, denoting where the entrance or exit would have been. It immediately adjoins the since discontinued (closed) public footpath leading past the site.

Tom Colquitt believed that the Section’s second OB was destroyed by construction work for the new Yacht Club on Wroxham Broad after the war.

Transport was a 15cwt Platoon truck (with RASC driver) and a Utility (a small van-like vehicle). The Section did not have bicycles or motorbikes unlike other Scout Sections. Lieutenant Pike had his own private car.