CART are approached from time to time about excavating Operational Bases. We are not too enthusiastic unless there there is a good reason to. It is  an awful lot of work to properly excavate one. When we were asked to advise about an Operational Base found during an archaeological survey at Binnegar Quarry in Dorset, we certainly didn't realise the scale of the project. We were fortunate to have professional archaeological advice from Andrew Joseph Associates and a great deal of support from Raymond Brown, the quarry contractors. The site was due to be totally destroyed by quarrying and the state of the surviving remains of the Operational Base meant that it was not a candidate for scheduling and preservation. The County Archaeology Service and Historic England were consulted and approved the plans.

At first glance there wasn't a great deal to see. A long depression in the ground and the remains of one shaft with a more intact one at the other end. The whole area covered in rhododendron, meaning that LIDAR was ineffective. We have been looking to see if was possible to use LIDAR to locate OBs in woodland, as the technique allows a ground map to be created even through tree cover - except when there is rhododendron growing! CART produced an initial report. (more on LIDAR later this week)

Raymond Brown kindly arranged to clear the rhododendron for a professional survey to be done. This revealed earth banking around the site not immediately apparent to the naked eye. It is clearest on the cross section profiles. An initial metal detecting survey was undertaken of the immediate area prior to excavation. This identified a number of finds which were plotted on the initial survey. All were located around one of the shafts with nothing around the other end. We utilised metal detectorists with specialised expertise in military ordnance and everyone working on the site attended a briefing about the recognition of potential ordnance risks and the process for site evacuation and calling in experts in safe disposal . Finds of live ordnance material are unusual on Auxiliary Units sites, but not unheard of, as the Coleshill Uncovered project demonstrated. Fortunately, while a number of booby trap devices, fitted with explosive caps, were discovered, all showed clear signs of having been fired. No live ordnance material was found on this OB site at any stage. Finds images. 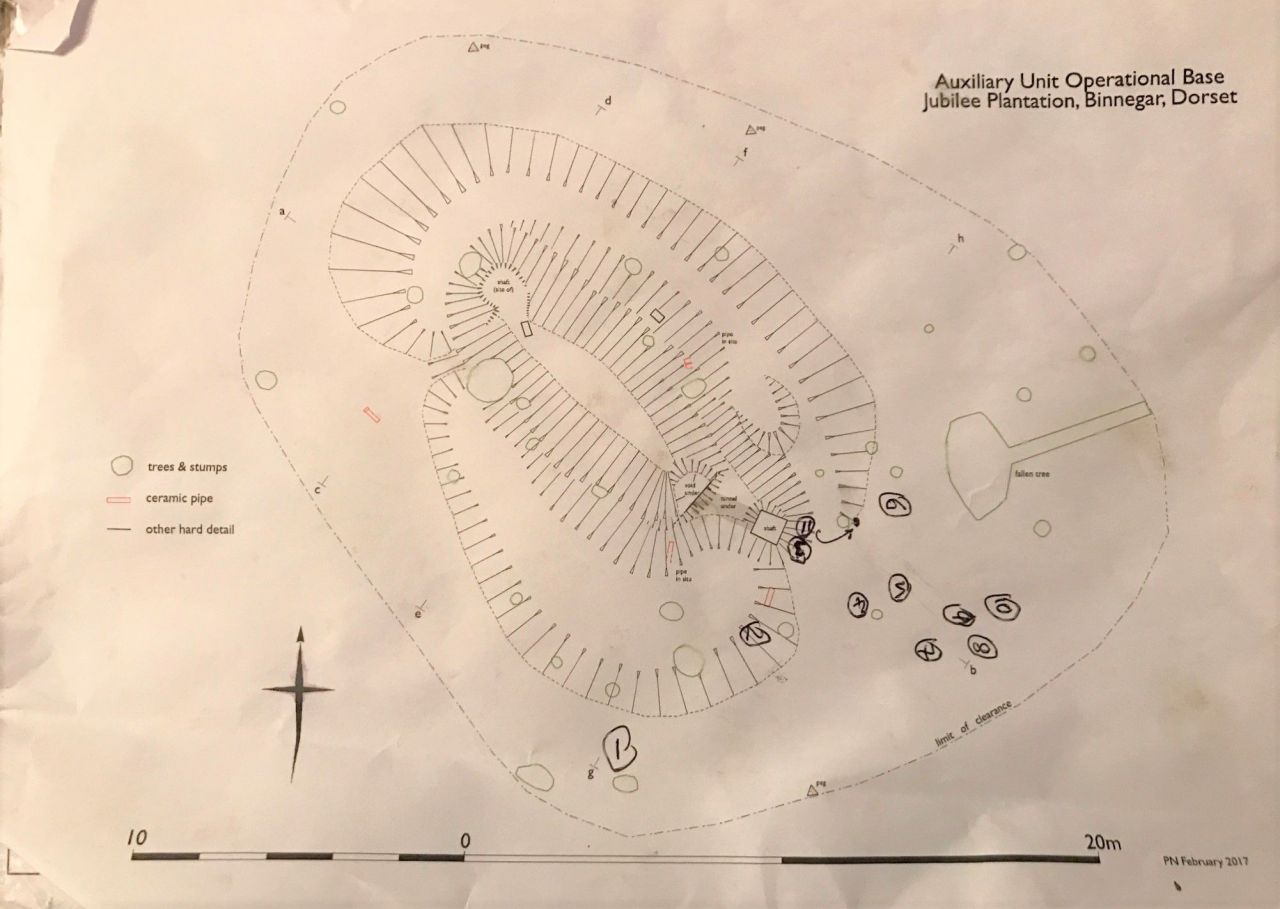 ​
Subsequent to this the collapsed area over the main chamber was excavated in alternating blocks to create sections. Once these had been recorded, the corrugated iron roof was cleared. This revealed that the roof was crumpled down and overlapping, but with evidence of the centre of the roof having been removed - evidence by the lack of in situ bolts. Later a number of these were found in a pile at the site of the OB, at the base of a tree stump.

Clearance of the open shaft uncovered the remains of the counterweight at the base of the shaft. The other shaft could not be fully excavated initially due to the confined space and danger of working within it. The sections developed during this stage revealed that the OB had been deliberately filled with sand from the northeast end shaft. It was subsequently confirmed that during a previous phase of gravel extraction the then operators had done this to prevent access by children. At that point the sand was considered a waste material. We appreciated that they had used sand as it made the digging much easier!

One of the major features uncovered was the extensive ventilation system. Runs of glazed earthenware pipe with concreted joints were found heading in all directions from the OB, with evidence of pipes entering the roof and also the lowest level of the floor. There was a larger pipe running down the outside of the OB the take air to the floor level and hollow concrete blocks were found which had been used as ventilation in the centre of the roof, similar to those seen at the intact Beaminster OB. The album of images has an awful lot of images of pipes! Where we found intact runs, the pipes had been embedded in sand and at the end there was evidence that there had been a wooden box - perhaps with a mesh cover. There was also a deliberate up then down down arrangement to stop water running down the pipes into the OB. it appeared that the prevailing wind was used to assist cold air to the base, with the warm air rising through the roof, to create a flow inside. The only other location we know where the pipe work has been similarly excavated is at the Bewley Down Outstation, which is documented in the book "Chirnside 1" by Hugh May. Those excavating OBs should be aware of how far around the obvious structures, the ventilation system may reach. Excavation Images

Following a week of excavation, the site was backfilled, allowing the clearance of the trees form the site and removal of remaining vegetation. A further metal detector survey was then undertaken over the wider area now exposed which made numerous finds of booby trap devices, again all having been fired. They were largely clustered in one area again, suggesting possible training at a distance from the OB. We we also received support as a group throughout this project from the New Forest Community Archaeology project, funded by the Heritage Lottery Fund. This included help with processing some photogrammetry images and training in the use of the QGIS plotting system which we put to use in plotting the new finds. 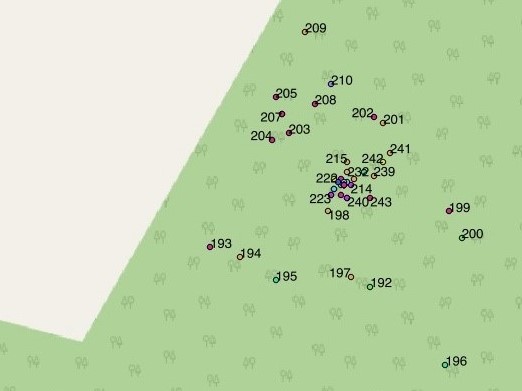 We returned to complete the excavation of the shaft and tunnel section. This was undertaken by digging out around the shaft and then breaking away the concrete blocks, level by level to allow excavation of the interior. This was a truly massive undertaking, and would have been impossible without the excavator provided by Raymond Brown. Using this method meant we could identify the extents of the original hole dug to install the OB and also identified a soak away system for drainage. Bitumen felt had been used to damp proof the exterior of the structure.

Clearing the shaft revealed very little in the way of finds until almost at floor level, when, in a moment that that could have graced a Time Team episode, numerous finds appeared in the last metre of infil of the shaft and tunnel on the final day. This included remnants of the counterweight hatch system, and boxes of booby traps devices, specifically Pull Switches, Pressure Switches and Time Pencils scattered through the fill. All  had been dismantled to remove the small explosive caps. Possibly this was done by members of the Patrol to make the devices safe. While they might have been found by children at a later date, the systematic way they had been dismantled with none in a fired state suggests a deliberate action. Within weeks the entire area had become a 20 metre deep sand quarry with no trace of the OB surviving. Finds Images

We had hoped to mount an exhibition of the finds nearby this year, but have not been able to do so as a result of the covid-19 pandemic.

We learnt that fully excavating an Operational Base is a major undertaking, even with big machinery and plenty of personnel. The ventilation systems can be extensive and extend far beyond the main structure and may need to be excavated first to allow heavier machinery to approach without causing damage. A full excavation should really only be undertaken when the structure is likely to be destroyed in order to "Preserve by Record". Excavation is a destructive process and if not carefully recorded then information is lost forever. We are still working on a comprehensive write up of this project to fully record all that we found. The final result will be lodged with the Dorset County Archaeology Service. Raymond Brown kindly donated the finds to CART for use in future displays and also printed an article on the project in their company magazine. CART would like to thank Raymond Brown, the New Forest Community Archaeology Project and Andrew Josephs Associates, for all their assistance.

​Tomorrow - A look at recording an OB when access is not possible.

Our contribution to this digital event explores the archaeology of the Auxiliary Units, created in 1940 in case of German invasion. With underground hideouts around the coastal areas from the far north of Scotland all along the east coast to South Wales, we could never have run a single face to face event covering all these locations, so a digital festival seems ideal... and what better time to launch our brand new website.

As well as looking at the results of digs at Auxiliary Units sites, we will explore the many different archaeological techniques and processes that have been applied.

We have some new and previously unpublished images from investigations around the country and some videos being shown for the first time.

We will lead you through the many sources of information available. We have linked up with professional archaeologists to bring you some state of the art digital investigations, in keeping with the digital theme of this event.

More about the archaeology festival on the CBA website.