The Scout Section was made of Regular Army soldiers with a Lieutenant in command. Their role was train the Home Guard patrols, but also to go to ground themselves in the event of an invasion.

The Wiltshire regiment provided two Scout Sections to Auxiliary Units. This may have been because the Highworth, Wiltshire address of its Coleshill Headquarters was more attractive to recruits, looking for a posting near home. This was one and the other was in Hampshire.

Patrick Cosgrove joined Auxiliary Units on 16 Nov 1940, indicating the likely date of formation of the Scout Section. He left the section in September 1942, being posted to the 7th Battalion Wiltshire regiment, a couple of months after Lieutenant Brain took command. Possibly he was replaced by Jack Blandford who arrived from the same unit.

They seem to have worked closely with the Dorset Regiment Scout Section  and Lieutenant Kidner knew its commander, Lieutenant Peter Weaver very well, with the two men remaining friends long after the war.

On one occasion, the Dorset and Wilts Scout Sections combined to test their new found skills. The Operation was to attack the town of Blandford in Dorset which was defended by Lord Lovat and his No. 4 Commando. The Auxiliary Units task was to sneak in and place big chalk crosses on strategic buildings and structures to emulate planted bombs.

Chalk marks were put under the bridge, in the Post Office and the Commandos own HQ. The Auxiliaries were completely successful and were considered to have effectively destroyed the town without compromising themselves or confronting the Commandos in any fighting.

Jack Blandford from the West Dorset Section had the chance to explain to Lord Lovat how they were able to operate without his Commandos realising. The Auxiliaries were not only dressed in black, but they also wore black plimsolls which were contrary to what the Commandos wore. Consequently the sound of the Commandos hobnail boots gave their positions away, and in fact whilst they were running along the road, Jack and his comrades were running alongside them in a lower ditch without them realising it!

No. 4 Commando under Lord Lovat was only in Dorset for a fairly limited period. They used the South Dorset coast was used to train for a fortnight before embarking for the Dieppe raid on 18th August 1942. They returned to north Dorset in autumn 1943, based around Shaftesbury. Although this is close to Blandford, it is likely after the date when the Scout Sections were disbanded and Jack Blandford posted back to the Wiltshire Regiment.

Lieutenant Kidner recalled being sent to Coleshill for training, including unarmed combat, booby traps and explosives. So too did Jack Blandford after he arrived. Normally the men would be sent on a two week long Scout Section training course shortly after starting as was the case for John Hutchins.

After the Scout Section was stood down, the men returned to the Wiltshire Regiment. However, shortly afterwards they were contacted to consider joining the SAS. It is likely that they all attended, to hear the legendary SAS leader, Paddy Mayne, tell them what was involved. The officers apparently met at the Curzon Cinema in London's Leicester Square. "Tiny" Kidner described the lights being put out after the men being told they could leave without shame - then hearing fumbling as some got up to leave. Along with him, old friend Lieutenant Peter Weaver from the Dorset Regiment would join. By this time, Lieutenant Brain had already been recruited to Phantom and Lieutenant Beer was in the Far East. The other ranks were ordered to the Grosvenor House Hotel in Park Lane for interviews and possible offer of a transfer. Burgin, Blackwell, Blandford, Straker, Hanford, Stoneham, Beckford and Slark signed up for the SAS. So too did John Hutchins, but a serious car accident and the resulting injuries meant he was unable to join his comrades as they left for training in Scotland. They would go on to take part in Operation Haggard, one of the SAS operations in France during the period around the invasion. They then served in Germany and Norway before the SAS was disbanded. 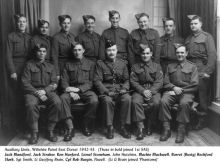 Scout sections normally had two operational bases. Tiny Kidner recalled however, that during his time, the section weren’t using an OB at all. Lieutenant Brain recalls the men working on one base in Hardown Hill above Chideock in West Dorset, though it is not certain this was for the Scout Section’s own use. This was common knowledge and indeed local residents visited the workings while it was under construction. Lieutenant Brain came up with a way to discourage this, placing a substantial quantity of explosives that needed disposal in a hole and detonating this late at night (by time pencil) when all the residents were in the pub with the Scout section, suggesting that it was one of the mines laid in a fictitious minefield around the base being set off by a dog or small child exploring.

In the unit photo some of the men can be seen wearing revolvers in web holsters and with lanyards. Some of the men appear to have regimental titles on their epaulettes and some have another badge on their upper arm.

The standard transport for a Scout Section was an Austin 2-seater car and a 15cwt lorry, both with RASC drivers. The men normally also had bicycles.

Fire from the Forest, Roger Ford