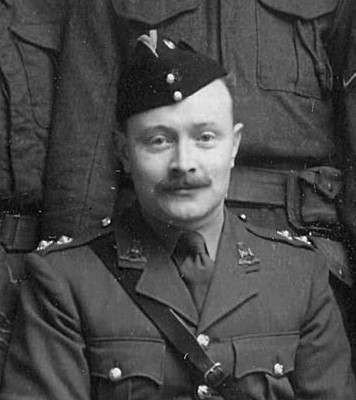 Geoffrey Brain was born in Kingswood, Surrey. He joined Lloyds Bank after finishing school. He joined the Wiltshire Yeomanry as a trooper in 1936. He was mobilised in 1939 joining his regiment on Wincanton racecourse. He married Betty Langton that year.

On 2 Jul 1940 he was commissioned into the Wiltshire Regiment. He was photographed with the 1st Battalionn Wiltshire Regiment officers in a photo that includes four others who would later serve with Aux Units, out of the 44 present.

Between 1940 and 1942 he served with 1st Battalion Wiltshire Regiment, where duties included guarding Prime Minister Winston Churchill, and training new recruits to throw grenades. He also had an episode of infectious hepatitis which laid him low for a while.

Around July 1942 he was asked to take over the West Dorset Scout Section provided by the Wiltshire Regiment. Reportedly this was because his predecessor, Lieutenant Kidner, who was a friend, wasn't doing the job well enough. He was with the Scout Section for nine months and spent his time training the Home Guard patrols and helping to build OBs.

He found the Home Guard patrols very keen, though felt they perhaps drunk too much beer (surely they were drinking cider in West Dorset?). The Section were building an OB on Hardown Hill, overlooking Lyme Bay, but had to contend with children and others wandering through the workings. They tried putting up signs saying that there were land mines and suchlike but to no avail. Brain described how they put 28lb of Nobel 808 that was becoming unstable and needed disposal into a hole. They then set the time pencils so the charge would go off around 10.15pm on Saturday night, just before the locals came out of the pub. They then went to the hotel for a drink themselves, so they were there when the loud blast was heard. They explained how they thought a dog must have wandered into the secret works and the minefield. Shortly after the air raid siren in nearby Lyme Regis was heard to go off. The following morning, the BBC reported that there had been no enemy action overnight, with the exception of "one small incident in the southwest"! The OB however, was an open secret in the village.

One day he was in the cinema in Salisbury with his wife, when a message was flashed on to the screen, asking Lieutenant Brain to go the manager's office. There he found his father-in-law with a priority telegram ordering him to report to Boodles club in London. He was interviewed and then, knowing very little about what it involved, joined Phantom, or more properly the GHQ Liaison Regiment. He was one of half a dozen officers selected. He then attended a training course during April 1943 at Richmond before taking over from David Niven (well known even then as an actor) in A Squadron in July 1943.

He served in Phantom's B Squadron in North West Europe in 1944/45 spending much of his time serving alongside the Polish Division. He was Mentioned in Despatches and was also awarded the Polish Cross of Valour.

He rejoined Lloyds Bank post-war and served with the Wiltshire Regiment (T.A.) as C.O. A Company.