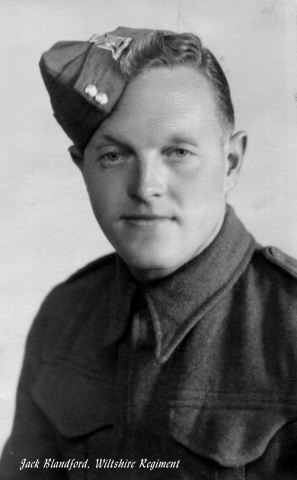 On 26 April 1940, Jack was called up and enlisted at Devizes, in the Wiltshire Regiment.  After 6 months training, he asked the R.S.M. if he could transfer to the 7th Battalion, stationed at Barton-on-Sea.  Being closer to home it was also easier to visit his family and brothers. Jack represented the Battalion in a few running sports (100 & 200 yds, plus cross-country).  Because of his athletic abilities, he was excused guards etc. but patrolled in pairs the cliff tops and the coastline, pillbox to pillbox.

Jack had a great sense of humour and was always able to see the funny side of life.  He would often recall the time when the Home Guard in his beloved Hampshire had made a wooden artillery gun, and placed it on the edge of a field to put off the German fighter planes.  Indeed, a German fighter plane had flown over and 'retreated' back to its homeland.  A victory?  Some hours later that day, it returned, flying low towards the gun emplacement and dropped a bomb.  As it bounced, it became obvious that they had dropped a wooden bomb on the wooden gun!

One dark and foggy night they accidentally entered a mine field, but kept their cool, and crawled out at day break by following the trodden-down grass made by where they walked in.  They escaped a charge by proving to the C.S.M. how they were able to survive and back track.

On route marches Jack's country upbringing taught him that eating Sorrell would quench his thirst, and enable him to spread his water supply up the end of the day.

Jack's soldiering skill was recognised and he was assigned to the Battle School to help train new recruits.  They were using blanks to fire over the heads of the recruits to encourage them to keep their heads down whilst learning the best way to crawl.  There was a lot of hollering as heads were raised, so Jack had an idea to use something from his youth - a spud-gun!  He took a blank cartridge and pushed it into a potato, took aim and fired.  It worked perfectly and he could hear the 'spud' ping off the recruits' tin helmets.  He was later reprimanded, as everyone thought he was using live rounds!

Jack volunteered for anything that was offered in order to avoid the 'spit and polish' and although up for promotion to Corporal, whilst stationed at Barton-on-Sea he volunteered for the Auxiliary Units - and was accepted.

Although nobody knew anything about them, Jack joined the Auxiliary Units summer 1942.  He caught a train to Dorchester Station where a car picked him up, and was eventually introduced to the other chaps.  Jack was one of 13 men who made up a Scout section.

Jack personalised his 'dagger' by smearing candle wax on the reinforced hilt, scratching his initials into the wax with a pin and using the acid from a time pencil to etch his initials into the exposed metal. Their shoulder titles were stripped from their battle dress but kept their cap badge on their forage caps. As it was summer they lived in tents behind Chesil Beach, but were eventually taught to build their own Operational Base that was accessed through a hollowed out tree stump.  From this they patrolled the East Dorset coast line.
When asked about his time in the OB he said the plastic explosives gave off fumes that gave him and the other men terrible headaches. When the sticks of dynamite started to sweat, they carefully collected them together and safely set fire to them. They learned all about the local terrain, so they could find their way around in the darkness of night.

Jack was trained to use all known allied weapons and enemy weapons - strip down and reassemble them. He trained in night fighting by wearing blacked out swimming goggles. In particular knife fighting.  They called the style of fighting 'thuggery'.

He recalled one particular instance where he was given leave.  He was allowed to carry his Smith & Wesson revolver - and live rounds.  Because he didn't have shoulder flashes, he was stopped at a railway station by MPs who asked what unit he was with.  He told them that he wasn't allowed to tell them, so I think he may have provided a contact telephone number.

When he returned to his family in Hampshire, his dad saw the revolver and said, "you must be doing something special lad".  "Yeah" he replied, ”but I'm not allowed to tell you".
They taught specially hand picked Civilian Home Guard members the use of weapons and explosives. The Auxiliary Units used a variety of explosives: Nobel 808 (Dynamite), Plastic explosive with time pencils and Molotov cocktails (as the crimped metal caps became rusty, these Molotov cocktails were frequently destroyed).

On one occasion Jack was teaching the Home Guard how to use a Sten-gun.  He had lined them up in a chalk pit and gave the order to fire at their targets.  One of the youngest happened to be nearest to Jack and on firing his weapon could not stop it.  With his runaway weapon still 'spitting out' bullets and still in his hands, turned to Jack.  "Can't stop it!" he shouted. Jack dived to the ground to escape the hail of bullets, which fortunately subsided.  He approached the young lad who was shivering with fright and calmly explained that next time he has a runaway weapon, knock the magazine off!

As the threat of invasion passed, the Auxiliary Units were disbanded and Jack was returned to the 4th Battalion Wiltshire Regiment, Rye Harbour, Sussex. Soon after, orders were posted, and those who had served in Auxiliary Units were asked to volunteer for the 1st Special Air Service.

The old Sergeant Major shook hands with them, shed tears and wished them all good luck.  The lives of most of those who Jack and the others left behind were sadly taken during the months following D-Day. From the 13 Auxiliary Units Scout section, 7 out of the 8 volunteers of the Wiltshire's were accepted into the S.A.S. and within a week of returning to their various units, were on their way to Scotland. 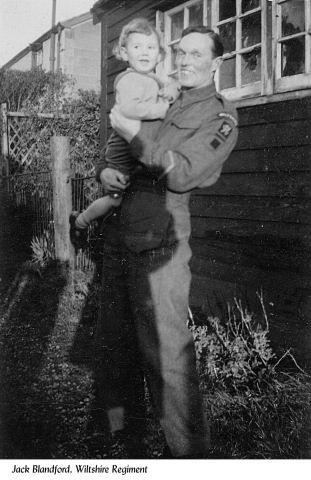