This was the original trial station set up at the start of 1941. It was originally a corrugated iron cottage known as Hilltop at the top of White Hill, Challock. It was then moved to more substantial premises in Challock. Beatrice Temple visited Challock 24 Feb 1942, by 30 March 1942 she found the hut closed but tracked down a billet in Wye. She visited again 22 April 1942 but by 27 June 1942 she visited to see the "new hut". Challock is not mentioned again.

David Lampe wrote to Norman Field in Jan 1967 regarding Hilltop:-
"The bungalow on the top of  your hill was one of the first control stations set up by the Special Duties Section of the Auxiliary Units. Several thousand civilians were going to spy on the Germans, pass reports through cut-outs and letter boxes to civilian-manned out stations, and these would be radioed to the control stations and then telephoned to GHQ Home Forces. Each station was operated by three ATS officers who had one transmitter in full view (probably inside the bungalow) and another in an underground hideout which they would have moved into if the Germans had landed. You wouldn't have noticed the aerial because it was in a tree – literally. Signals experts carved channels in the trunks, buried the cables and plastered them over."

When Captain Norman Field first came to Kent to take over from Peter Fleming in November 1940 he recalled:
"The last house on the left as you went through Challock before entering White Hill was engaged in under-cover activities; something I only discovered by chance a few months later. It is the one known as 'Hilltop' which has a corrugated iron roof. A few months after my arrival we were visited by General  Alan Brooke, the Prime Minister's senior advisor on all military matters. I had decided to take him to meet a Patrol of foresters at their Challock bases. Just before his arrival a Major appeared who told me that he had Coleshill's authority to take charge for a short while, so would I follow. The small cortege stopped at the top of White Hill where the Major took the General into 'Hilltop'. They were met by two young ladies in FANY [he may mean ATS] uniforms who, it appeared, were the sole occupants. Business (whatever it was) concluded I took charge and conducted Alan Brooke to meet the foresters in their hideout. My curiosity had been aroused, so I made judicious enquiries. The two young ladies were members of a parallel organisation to provide means of passing information from agents. Such was the security we knew nothing about it.
Somewhere in the vicinity, perhaps under the floor of  'Hilltop' or in adjacent Kings Wood, the girls had an underground hideout similar to ours. They were to disappear there with their wireless transmitter on the occurrence of invasion. Security dictated that as we were saboteurs and not in the intelligence gathering business risks would be reduced if we were kept in the dark about it."

'Hilltop' was aptly named as it lay 650 foot above sea level and had an uninterrupted arc of clear ground for 180 degrees from north through east to south. In the image, Hilltop is the far right building with the red roof. It has been demolished.

It is presumed to have closed prior to June 1944 as it does not appear on the Jones Map. 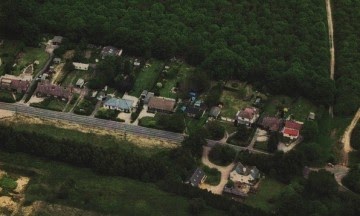