Coleshill House was a grand country mansion dating back to 1652. There were two main floors linked by a grand hall plus a dormitory floor in the roof.  Underground tunnels brought water to the house. Even by 1940 it had no electricity installed, meaning the Army needed to install a generator.

Below in the basement were the staff rooms which extended out into a single-story annex containing the kitchen and servant’s hall. The Commander of Auxiliary Units and his Second-in-Command had offices on the first floor.

The two Pleydell-Bouverie Sisters Mary (‘Molly’) and Katherine (‘Bina’) Pleydell-Bouverie agreed to hand over their house and estate to the war effort, but the sisters remained in residence in part of the Main House.

In 1946, shortly after the end of the Second World War. Coleshill House was purchased from the Playdell-Bouverie family by a Mr E. Cook, a founding partner of the international travel Agency, Thomas Cook & Son. Six years later in the late summer of 1952, disaster struck in the form of a fire, and Coleshill House was no more. All that remains now is the outline of the house following its destruction.

The following account is extracted from the Swindon Evening Advertiser of 24 September 1952 and graphically displays the drama of the previous day:

Molten lead pouring from the roof like silver rain, drove from the house, Firemen and Estate workers who were carrying out onto the lawns art treasures and furniture.

An inadequate water supply which had to be pumped half a mile uphill, hampered the 14 fire brigades that responded to the call. Within 4 hours of the start of the fire, all that remained of the building was the burned out shell surmounted by the 8 massive chimneys, 3 of which had recently been renovated at a cost of more than £2000.

Flames leaping more than 20 feet from the roof were seen for miles around and within a short time the lawns around the house were crowded with spectators.

A painter had been using a blow lamp to remove paint from the dormer windows, the Evening Advertiser was told. Mr L H Knapp, Director of Messrs J Knapp & Sons Ltd, carrying out the renovations at the house said "The men were equipped on the roof with fire extinguishers and buckets of water in the event of something like this happening. The fire carried through cracks
in the woodwork and the wind carried the fire away from the men. It was not detected at once and we could not stop it with our fire extinguishers"

Decorators, farmers, estate workers and villagers hurried to the house to help carry out valuable paintings, Furniture and books. Everything of value was saved with the exception of one or two of the heavier pieces of furniture. Mr Harold Williams of Home Farm, described how he and his men stopped work immediately to help remove paintings and furniture. Soon all that remained were 3 busts, one beheaded which lay neglected on the lawn.

Suddenly a wave of heat swept over the spectators and a mushroom of yellow smoke rose skywards as the second floor caved in, whilst firemen continued in vain to play water on the flames from a turntable ladder. Mr Williams said, "I think we managed to get everything of value out including 2 sets of chairs costing £2000 which Mr Cook had purchased from the Playdell-Bouverie family and left in the house. Only when the molten lead cascaded from the roof did we give up".

Whilst firemen waited for further water supplies, some carried by tender, they were served with cups of tea brought up in buckets from the village. Water was even taken from an ornamental goldfish pond, being replenished by a pump sited on the banks of the nearby River Cole. Even this was inadequate to meet demand and the goldfish were soon left floundering in the mud.

Villagers were visibly affected by the fire with one quote being that with the House having gone, the whole character of the village had gone.

The fire was eventually brought under control at 10:15pm, but continued to blaze until midnight. Fire brigades from Didcot and Abingdon continued to tend the fire overnight being relieved at 7.00am by firemen from Faringdon and Wallingford. Regretfully, 2 firemen sustained injuries whilst fighting the fire, these being Fireman H G Hocking of Curtis street, Swindon who was treated for shock at Swindon GWR Hospital when a turntable ladder from which he was operating collapsed. The other casualty was Sub officer N G Speight of Swindon who was treated at St Margaret's Hospital, Swindon after a burning ember dropped in his eye.

The house was scheduled to be passed onto the National Trust upon the death of Mr Cook. Mr Cook was said to be too distraught today to make any comment.

Please also see the article from the Fire Brigade Society 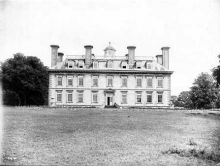 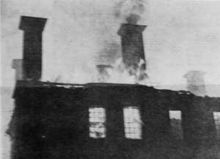 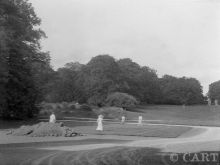 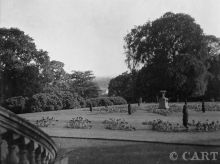 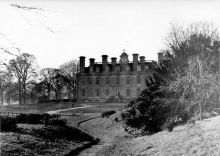 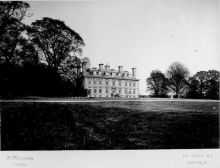 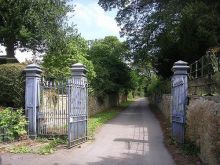 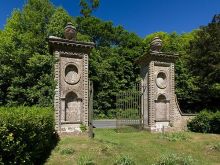 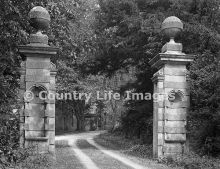 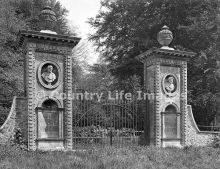 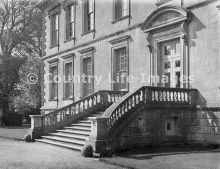