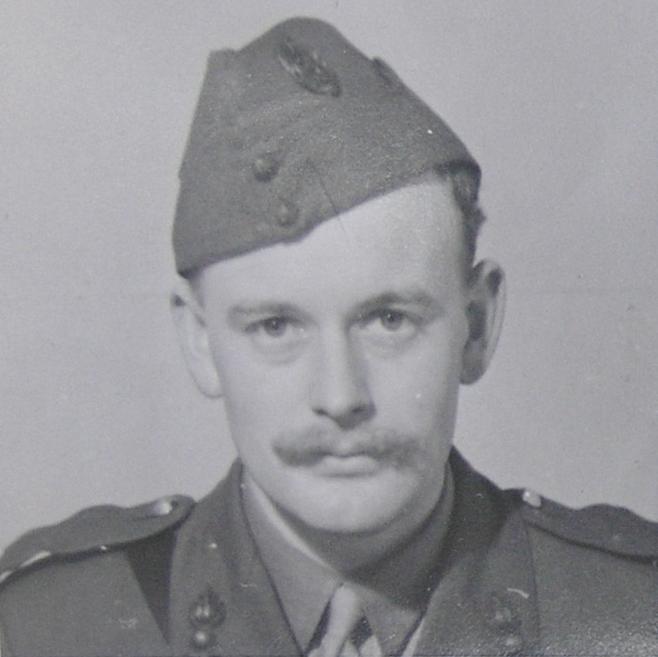 Born in Pangbourne, Berkshire. His father was Commander Andrew Francis Gordon Tracy RN. His brother would become a Rear Admiral. While at Stowe he was in the the Officer Training Corps there. He also took a leading part in attempts to save another boy who was dragged unconcious from the swimming lake at Stowe in June 1937. Sadly prolonged attempts at artificial respiration by Tracy and others were unsuccessful and the boy died. At the inquest, Tracy appeared as a witness. The report noted that he held the Intermediate Certificate of the Royal Life Saving Society.

On his SOE assessment form he was described as 5 foot 11 inches tall, weighing 12 stone 11 pounds, with blue grey eyes. He could ride, sail, shoot, swim, sketch, cycle and drive, but said he would only run when necessary.

In 1943 he married Geraldine Gilroy Hann, a member of the Womens Auxiliary Air Force at St George’s in the City of Westminster. They became engaged in March 1943 and married in May. She lived at Ysguborwen. Aberdare and died in 2001. They had three children.

After the war he was appointed to the Ministry of Supply working on tank design. Later he worked with the the Atomic Energy Authority in a planning role. After moving back to Wales from Woking in November 1959, he became production director at the Prestcold Division of the Pressed Steel Company, at their Swansea Factory.

20 Jul 1940 Posted to No.4 Commando, which had been formed on 23 Jun 1940. The unit paraded for the first time in Weymouth on 22 Jul 1940. They then moved to Scotland for further training and became part of 3rd Special Service Brigade, before reverting to the title of 4 Commando on 26 Feb 1941. On 4 Mar 1941, they took part in Operation Claymore, the raid on the Lofoton Islands. Is is not known if Lieutenant Tracy took part, though 250 men of all ranks took part.

17 Jun 1941 Posted to Headquarters Auxiliary Units. He was one of the Royal Engineers Officers responsible for training at Coleshill House. He was involved in writing the 1938 Calendar, the explosives manual issued to Auxiliary Unit Patrol.

7 Sep 1941 Promoted Temporary Captain Dec 1941 He suffered a dislocated hip but made a full recovery, retaining his A1 fitness grading

14 Oct 1942 Assessed for SOE on the recommendation of Auxiliary Units.

10 Nov 1942 Posted to SOE as Liaison Officer with rank of Acting Major, liaising between SOE and the Chief of Combined Operations in relation to the Small Scale Raiding Force who control was shared by the two organisations

3 Jun 1943 Posted back to unit on completion of job. This was a result of the SSRF being absorbed into 2 SAS in North Africa and ceasing to exist.

14 Nov 1943 Appointed Troop Commander, 1 Troop, 80 Assault Squadron, 5 Assault Regiment Royal Engineers, 79 Armoured Division. This division, known as "The Funnies" were training for the D Day landings, equipped with a range of specialist armoured vehicle designed to breach the German Atlantic Wall defences on the beaches and inland. These included Armoured Vehicles Royal Engineers (AVRE), modified Churchill Tanks, with a concrete buster petard mortar in place of the main gun. They could carry bridges and fascines to overcome walls and trenches, or rolls of matting to allow vehicles to drive over the soft beach. The AVREs were accompanied by mine clearing flail tanks and armoured bulldozers.

6 Jun 1944 On D Day, Captain Tracy took command of a half squadron of 80 Assault Squadron landing on Juno Beach, specifically Nan White sector, tasked with opening Green exit with a lane at least 9 feet wide, and then to expand this to 16 feet, before assisting the Canadian Units with any tasks requiring their specialist skills. Captain Tracy was in command of AVRE 1A, the Troop Commanders tank which can be seen in photos taken on the beach on D Day. He landed from Landing Craft Tank (LCT) of 106 LCT Flotilla in and AVRE fitted with a Bullshorn mine clearing plough between 8.15 and 8.20am. The troop successfully completed their task, losing one of their AVRE tanks to a mine.

7 Aug 1944 Captain Tracy had transferred to 78 Assault Squadron RE, operating in support of 2 Canadian Infantry Division for Operation Totalize, an armoured assault on the German positions southeast of Caen. Their unit was responsible for marking the cleared path for a tank column. The tank was meant to have an automatic marking mechanism that could be operated from inside the protection of its armour. However it failed to function effectively, meaning the men had to dismount under fire to mark the path. Captain Tracy lead the way in this action and his quick decisions and decisive actions ensured the armoured column could advance and resulted in the award of a Military Cross.

Captain Tracy remained in the Army after the war as a Regular officer.

Whilst at Coleshill, he was involved in an all Auxiliary Units crash on the Highworth - Coleshill Road, as recounted by Corporal Eric Gray. Captain Tracy was driving his sports car, and pulled out to avoid the daughter of Major Oxenden who was being pushed along the road in an pram by his wife. This resulted in a head-on collision with Captain Anderson's private car, being driven by Corporal Mappin, with three other RASC drivers as passengers. 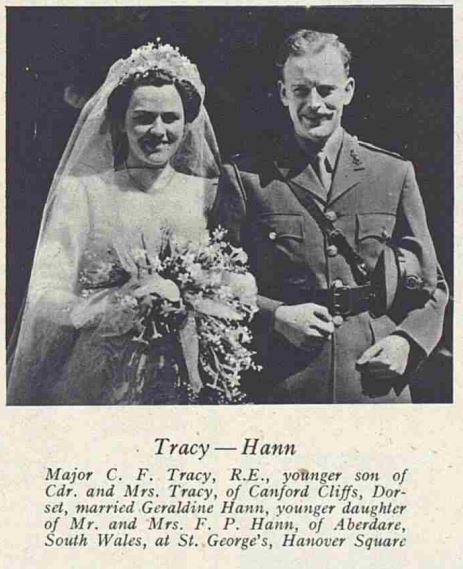