The son of James and Edith Pascoe of Somerset. He is remembered on the Bayeux War Memorial at Normandy, France.

Henry Pascoe has a memorial tree at Coleshill Estate.

A plea for information on his fate appeared in Aberdeen Weekly Journal 16 Aug 1945;

" APPEAL FOR NEWS - The parents of three British parachutists, one of whom hails from Moray, appeal for any information from returning prisoners of war regarding their sons. The Moray soldier, Trooper Joseph Ogg, whose parents reside at Surradale Cottages, Spynie, Elgan, Moray had many adventures in France and fought with the Macquis before disappearing a year ago. A member of the Special Air Service Regiment, he was parachuted into France early in June 1944. On July 4th 1944, news was received by his parents that he was missing and wounded, believed to be a prisoner of war.

That was the last official news received of him. Neither the War Office or The International Red Cross has been able to secure any information regarding him since. After Trooper Ogg had been dropped in France he became separated from his comrades, was pursued by Germans, hidden by French peasants, and eventually directed to join the Macquis of Vienne in the South of France. There he made the acquaintance of other British parachutists. With other two British lads Cpl. John Williams of London and Trooper Henry Pascoe of Wellington, Somerset, he was wounded on July 3rd 1944 while fighting with the Maquis in Le Verriere Wood, near Poitiers. All three with a number of the Maquis were taken to a French hospital. On the night of their arrival the F.F.I raided the hospital and carried off the wounded Maquis.

The Germans, fearing the British soldiers might be freed in the same way, moved them to a German military hospital at Tours on 8th July 1944. On August 14 the three British parachutists were discharged from the hospital and as far as can be ascertained were taken to Germany as prisoners of war. 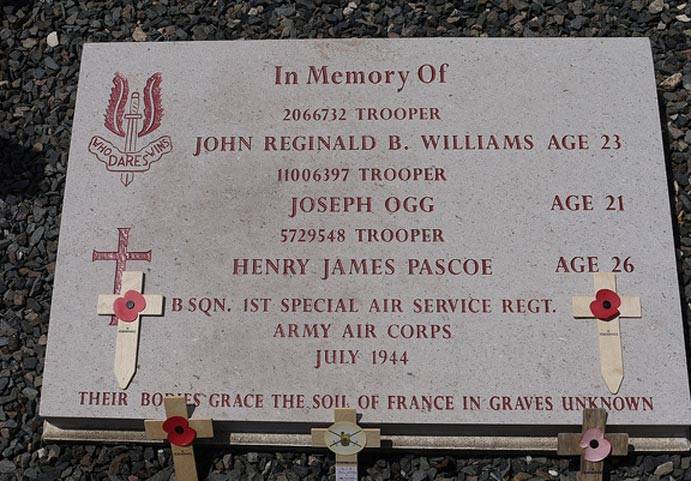