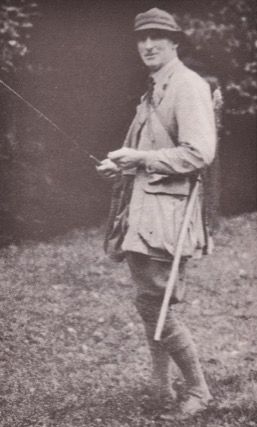 H.S was the Sergeant of Tawstock Patrol, Devon

Sergeant Henry S. Joyce was a retired bank manager and a farmers son. The Patrol had great confidence in his leadership as a man you could trust and he had a vast knowledge of the countryside and its ways. A very fit man for his age which Bert Verney remembered as 68, 10 years older than he was.

Known as Harry to family or “H.S” to everyone else he wanted to be a farmer from an early age. His mother thought that wasn't good enough for him, so he was forced against his will into employment in a bank. He became a manager of the National Provincial in Barnstaple and apparently was quite good at it. Never enjoying the work, but staying with the bank until he retired, one of his last postings before retirement being in Ashburton where a few years later the H.Q of Devon Auxiliary Units was right next door.
He was good at swimming and at one time instructed the Plymouth police in lifesaving. He was also a excellent singer with the Barnstaple Male Voice Choir.

H.S loved the countryside, and became quite well known in England as an angler and writer on rural topics. Known as a rural eccentric and multi-talented character he was a very observant naturalist, his refrigerator often full of interesting specimens. He wrote many books and articles for publications such as “Country Life”, which he illustrated himself with watercolours and pen-and-ink drawings.
His son recalled that he was short listed as the official naturalist for one of Sir Ernest Shackleton's expeditions to the Antarctic but the Bank refused to release him.

He would often be seen riding his “sit-up-and-beg” bicycle in the middle of the road paying no attention to the traffic around him. He wore a tweed hat decorated with fishing flies and many darns. His family complained it looked like it had been run over by a car. The rest of his wardrobe consisted of brown breeches which he darned himself, a darned jacket and thick shooting socks which he also darned.

Both Captain Slee and Sergeant Joyce were guest speakers in a BBC radio series “Country Magazine” in 1948 proving their knowledge of the countryside was well recognised.

A parody on Longfellow' poem Hiawatha has been attributed to H.S; "Should you ask me whence these stories, Whence these legends and traditions, With their nasty sounds of banging and their smells of smoke and almonds. I should answer, I should tell you, Tales they are of Home Defences, Of a very Secret Movement".

The late Auxilier Bert Verney from his book “Reflections – A trilogy of memories” ISBN 1 874448 20 5
TNA ref WO 199/3391
Hancock Data held at B.R.A
The family of Gerald Slee
A Country Childhood by H.S Joyce. Introduction by Roger Guttridge.
The Book of Bishops Tawton by Amery, Luxford and Sanders.