Born to Guy and Elizabeth Atkinson of Long Clawson, Leicestershire. His father was a Surgeon. He died at Briar Hill House, Danby and is buried at St Hilda Church, Danby, North Riding.

He joined the Foot Guards in WW1 from  the Bedfordshire Yeomanry. He was commissioned as Second Lieutenant in the Coldstream Guards and saw action in France from January 1918. He was awarded the Military Cross for leading a successful trench raid and was mentioned in dispatches. The citation states "he set a fine example of courage and greatly inspired all ranks with him".

10 Jan 1919 promoted to Lieutenant Coldstream Guards.
Between the World Wars he was seconded to the Colonial Office in February 1926 and was again promoted to Captain 15th May 1929 while still seconded.

3rd October 1931 retired from the Regular Army.
With the outbreak of World War 2 Guy Atkinson was back volunteering for service 27th June 1940 .
3 July 1940 Transferred from Coldstream Guards to the Royal Fusiliers

He was given the Area between the Tees and the Forth to set up the new Auxiliary Units organisation.
By late 1941 Captain Guy C L Atkinson was the Intelligence Officer for the Durham & North Riding with 25 Patrols to look after from Scarborough to the River Tyne.

Late in 1943 there was a re-organisation of the Auxiliary Units areas and the now Brevet Major Atkinson lost some of his Patrols. He ended up with twelve Patrols in the Durham Area. He lost Durham & North Riding Yorkshire Area Number 1, Middlesbrough, North Yorkshire Moors and Redcar.

At the end of May in 1947 Brevet Major G C L Atkinson had reached the Age Limit of Liability to Recall and ceased to be on the List of Officers in Reserve. This was when he had returned to the Royal Fusiliers.

In March 1956 he relinquishes both Brevet Major and Captain commissions and retires. 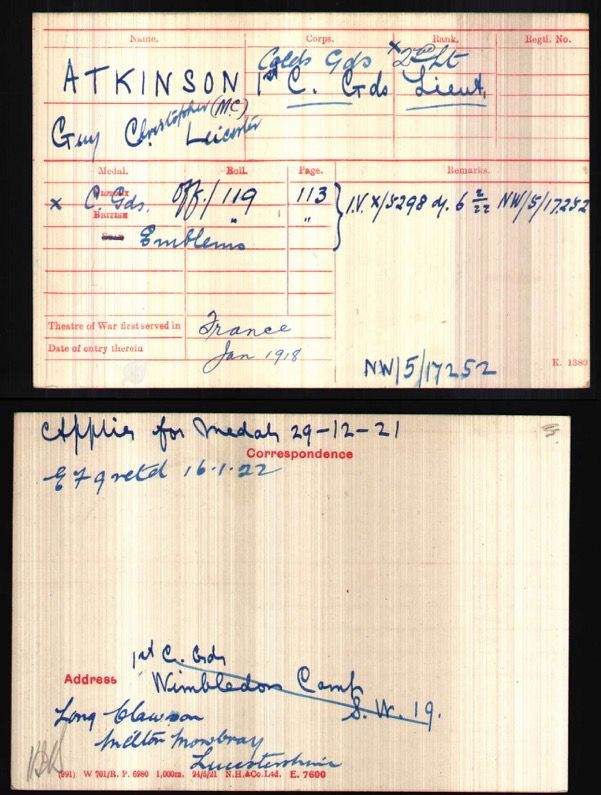