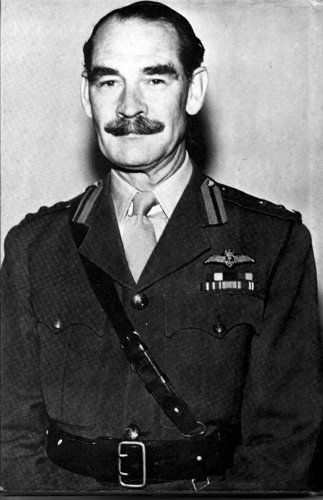 Though the first Royal Marine to complete the Staff College, he decided to trasbfer to the RAF and learnt to fly at RAF Netheravon (27 Apr 1925) and RAF Leuchars (16 Nov 1925). He flew with 441 Flight on the aircraft carriers HMS Hermes and HMS Eagle in the 1920s in the Mediterranean and China Sea

He was an officer with MI(R) in 1939 and took part in an abortive attempt to rescue men who had evaded the Germans in Belgoium but not escaped from Dunkirk. This was wholly unsuccessful and the men had to row back across the English Channel endig with their rescue by the Dungness Lightship.

He was briefly in Kent with Auxiliary Units with Peter Fleming in 1940. He then went on to join SOE, serving with Force 136 in the Far East. He role was to set up a stay behind force in Malaya, working with Spencer Chapman. He ended up at Padang in Sumatra, now Indonesia, having arranged escape lines to there from Malaya. Finding 800 men abandoned by their senior officers there, causing upset to  the civilian population and Dutch Authorities, he took charge and surrendered them on behalf of the British Army to the advanincing Japanese. It was a dangerous thing to have done as the Japanese had placed a bounty on his head. All were sent to a camp on the River Kwai in Thailand. He survived the ordeal and the Japanese never realised his identity as the saboteur they eanted to excute.

He  changed his surname by deed poll to Ferguson-Warren on 11 Nov 1949.

He became Head of the English Department at Flint Hill School, Oakton, Virginia

On being diagnosed with cancer, he returned to the UK to die, seeing put his last year in Hampshire.