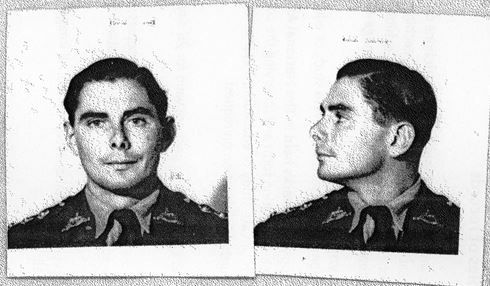 Eric Arthur Dring was born the son of a farmer, just outside Boston in Lincolnshire. He was Educated at Repton School from May 1934 until July 1937 and his list of academic achievements and interests is most impressive. He lists shooting, soccer, squash, tennis, golf and skiing as his sporting achievements and he had a working knowledge of the following languages, French, German and Urdu.

German was picked up during a two month holiday in Bavaria and Urdu comes from two years in Raj Putana, Eastern Bengal, Bombay and Arakan. Swimming, mountaineering, running and sailing along with ability to ride a bicycle and a horse and drive all motor vehicles including motorcycles all add to the impressive resume of Mr Eric Arthur Dring and there is no wonder then that after Eric’s exploits in the Auxiliary Units the S.O.E. took an interest in him.

Between 1937 and 1939 Eric was employed in the family farming business, a business to this day that still exists. On the 3rd September 1939, 2 days after the start of World War 2, Eric joined up with the 4th Battalion of the Lincolnshire Regiment (TA) as a Private. Seven months later and the 4th Battalion were embedded into the Regular Army and it is at this point that Eric undertook Officer training at Aldershot. From August 1940 until October 1940 after Officer training he ended up as Regimental Officer with the 4th Battalion with his emergency commission coming through on the 17th August 1940 as a 2nd Lieutenant which was Gazetted in the same month.

At the end of October 1940 Eric was seconded into the Auxiliary Units GHQ Home Front. We can only guess at how but with his background of fitness and languages and being of farming stock then he would have been an ideal choice. He attended Coleshill House and passed out as a Scout Section Officer. There is no further mention of his time as a Scout Officer, he would have had the pick of men from the Lincolnshire Regiment as his Scout Patrol.

In January 1942 Eric leaves the Auxiliary Units and his promoted to full Lieutenant employed in the Beach Defence Section of the 6th Battalion Lincolnshire Regiment. In June 1942 he attached to the 6/4 Bombay Grenadiers as Company Commanding Officer and Weapons Training Officer  which lasts until May 1943 where he is posted to the 85th Infantry Frontier Force Regiment in India where he is based at E.W.S. Poona and involved in small boat, weapons training and combined operations instruction.

It is during this time that the S.O.E. rears its head and he joins Force 136 of S.O.E. starting with Lt Colonel “Billy" Beyts who was Chief of Staff to Colin McKenzie. Eric is given the symbol of B/B723 and in November is involved in Operation Lancelot which was established to encourage and supply resistance movements in enemy-occupied territory, and occasionally mount clandestine sabotage operations.

From November 1943 until February 1944 he is within the S.O.E Naval Section and with this comes the promotion to Captain on the 20th January 1944. In June of 1944 he is part of S.O.E. Naval Section on Operation Galahad which was basically an off-shoot of Wingate's Chindit type operations in the Far East.  Come September of the same year Eric is off again this time to New Delhi and spends the next few months in Calcutta and is available for S.O.E Operation Prunella which is a little vague. From February 1945 to May 1945 he is in “N” Group in Bombay fitting out training schools

His final part in the war is sailing from India to Trincomalee in what is now Sri Lanka. He is the Officer of the watch on the voyage. S.O.E. had a main base on the island at that time and from Trincomalee on 24th October 1945 returns to England

It seems that while with the 85th Infantry in November 1943 Eric seems to have been a law unto himself  and really shirked his duty as shown in a letter from the Major in charge of the 85th to Colonel Beyts. The letter is as follows:

I much regret that I no longer have any alternative to bringing to your notice the highly unsatisfactory conduct of Lt. DRING during the previous week.

On Saturday Oct. 30th, our first in the camp, Lt DRING was directed to hand over S.O.E. stores at the office to Lt GODDARD. I left the office early in the morning and returned at lunch, to find no trace of Lt DRING. I discovered the next morning that he had not been able to hand these stores over to Lt GODDARD on Saturday. On the first day of our arrival in camp, where I was working myself until 1930 and with Lt PENTY unavoidably absent most of the day owing to an abscess in his face, Lt DRING, finding that he was unable to hand over stores, instead of coming down here to give me a hand just disappeared for the day without reference to anybody.

On Sunday I gave him a small list of things which I wanted seeing to. It included replacing articles of uniform with special reference to overalls, and the urgently required replacement of unserviceable cycle tubes. In the last seven days no articles of uniform have been replaced and an indent for cycle tubes was made out yesterday.

Except for an hour after lunch he was absent all Friday afternoon and again the whole of Saturday afternoon, without reference to me.

Para 4 of my standing orders required him to make out a roster of Duty officers. Checking up on it today I find that he included in it every officer except himself. His explanation is that he did not think that the Adjutant should do this.

Should it appear that I have taken a sudden or vindictive dislike to this officer with the object of shifting the blame for the state of 85 Coy from my own shoulders, I must point out that as far back as Aug 28th I paid a visit to the shows on which he was in charge and found that a series of orders which I had issued had not been carried out. He was on the point of leaving for a week-end in BOMBAY and I told him to see these neglected orders before he left. Despite, this I found that he had left for BOMBAY within 10 minutes of my leaving the shows.

I had him up at the next opportunity and told him off for this and for his complete failure to take any interest in his men out of parade hours. It was then that I discovered that three weeks after being given a crew of 12 men to look after he did not know all of their names and none of their tribes. As a result of this I decided to ask you to replace him, quoting only the fact that his lack of knowledge of even Urdu made him unsuitable for dealing with my men. I put this to Col. BEYTS on Sept 4th.

Right up to date I have taken the attitude that officers are presumed to back up the C.C. come what may, and that the C.O. knocks hell out of them himself but does not sneak on them to higher authority. At the occasion of Mr STEWART’s last visit, when he turned on my officers I protested most strongly. Their efforts stand up for the unfortunate collection of men who  had put their trust in them, and regarding whom they had previously made no collective complaint either to me or to visiting officers, are well known to you.

Now, when few men have been in such an unfortunate position as my men and I, my last surviving British officer behaves as I have stated above. Having adopted the shoulder titles of this regiment when he joined it in April he has now removed them and replaced them with those of the British Regiment which he left some 18 months ago.

I have not shielded myself behind any individual and do not do so now. But this is a matter in which my men and their future prospects of making good, are at stake, and an officer who is ashamed to wear their titles while on parade with them and who will not fulfil his duties even in the letter, let alone the spirit, will receive no more protection from me.

It didn’t seem to harm Eric’s career in any way and Colonel Beyts seems not to have taken any action against Eric. Eric returned to England and returned to his farming as he had left off and was head of a successful farming agricultural business which continues to this day.