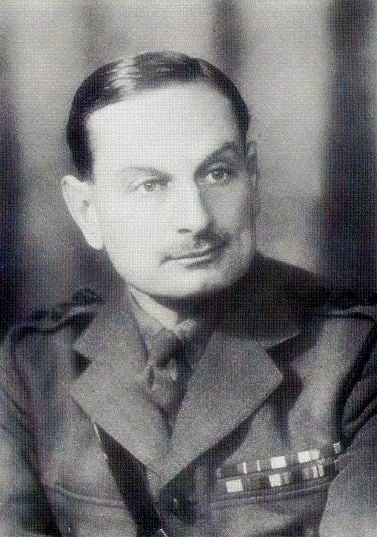 5th Northumberland Fusiliers for first year of military career in India
Posted to 3rd battalion, 6th Rajputana Rifles. Served with them in the Saya San rebellion in Burma 1930-1932 and in Waziristan 1936-1939

August 1942 sent to India as Chief of Staff to Colin MacKenzie and helped him set up SOE in the Far East. They would later be known as Force 136.

December 1943 – April 1945 Commanded 6th Rajputana Rifles in the Burma Campaign and awarded DSO for this in May 1945. 1946-1947 Commanded Indian Army Infantry School at Mhow leaving following the Declaration of Independence

Brigadier Geoffrey "Billy" Beyts, who has died aged 92, was awarded an MC and a DSO during a career with the Indian Army in which he saw action against Burmese rebels, Waziri tribesman and the Japanese Army.

In 1930, aged only 22 and commanding a company of his father's old Regiment, the Third Battalion, Sixth Rajputana Rifles, Beyts was allotted an area of Burmese teak forest the size of Wales to the west of the Irrawaddy river. Large areas of the country were in revolt, and Beyts was given a target list of 100 rebels. By the time he and his company emerged from the jungle, nine months later, every man on the list had been either killed or captured. For his conduct of these operations Beyts was awarded a Military Cross.

Thirteen years later, and by now commanding his battalion, Beyts was again in Burma at the forefront of Field Marshal Slim's pursuit of the retreating Japanese. He took part in the crossing of the Irrawaddy and the subsequent breakout, and played an important part in the capture of Maymyo and the Japanese mint there, which contained millions of rupees.

After the capture of Mandalay, Beyts was promoted to brigadier and commanded his brigade for the remainder of the campaign. He was also awarded a DSO to add to the three mentions in dispatches he had already earned during the advance from the Chindwin.

Geoffrey Herbert Bruno Beyts was born, at Budj, in Kutch State, India, on January 17 1908. Educated at Bowden House School, Seaford, and Wellington College, he entered the Royal Military College, Sandhurst with a King's Cadetship, in 1926.

Commissioned in 1928, he sailed to India to serve the customary year with a British battalion before joining his Indian Regiment. At the end of the year his battalion, the Northumberland Fusiliers, invited him to remain, but he declined, preferring to join the Third Battalion, Sixth Rajputana Rifles. In 1930 he went to Burma.

He also spent some time as part of the garrison of Fort Dufferin in Mandalay, which stood him in good stead when that city was captured in 1945.

In 1936, he saw action again in the Waziristan campaign, after which he passed the Staff College examination, being the first officer of his battalion to do so. He did not see his men again for another six years. In September 1939 he was appointed as a GSO3 at the War Staff of the India Office, and later with Middle East Operations at the War Office. He then returned to Britain to set up a resistance organisation which became Auxiliary Units.

For these services Beyts was awarded the MBE, and in August 1942 he was sent to India as Chief of Staff to Colin McKenzie, who was setting up the SOE resistance organisation (later renamed Force 136) in South East Asia. At the end of 1943, he returned to regimental soldering, commanding his battalion, and later the brigade of which it formed a part, until the end of the Burma campaign.
After a short period of leave in England, Beyts helped to plan the programme for the Indian Army Victory Contingent, before returning to India in 1946, to take command of the Infantry School at Mhow.
At independence, Beyts left India for Kenya, thus severing the last link of a family that had served in India for 340 years. Arriving in Kenya, he planned to start a dairy farm, but finding that, even after diversifying, this project alone could not support his family, he applied for an appointment with the Kenya Administration. While his wife ran the farm, Beyts served as District Commissioner for the Mweiga area.

The district included "Treetops" and in 1952, it fell to Beyts to tell Princess Elizabeth and Prince Philip that King George VI had died. In 1962, in the wake of the Mau Mau rebellion, Beyts was advised to leave Kenya. He was, however, unable to sell his farm, and received no compensation. The fruits of 13 years' work and the capital put into the farm were thereby lost.

Returning to Britain, Beyts took up an appointment as personnel officer for Vaux Breweries at Sunderland, then, three years later, became a Retired Officer Grade 3 with the MoD, with responsibility for the recruitment of Army officers.

Having retired to Devon in 1970, he and his wife were asked, in 1972, to supervise a camp at Greenham Common, Newbury, for Ugandan Asians expelled by Idi Amin. They were the perfect choice since both were fluent in Hindustani and Swahili.

Following the death of his first wife, Beyts moved to Nerja in Spain, but he maintained his service connections. He was founder, and life president, of the Royal British Legion's Costa del Sol branch.
"Billy" Beyts was driven by a firm religious faith and a strong sense of duty. In his autobiography The King's Salt, published in 1983, he said: "Caring for others in their distress has brought me the greatest rewards."

He married first, in 1940, Ruby Scott-Elliot, who died in 1980. He married, secondly, Linda Segrave Daly, who survives him together with the son and daughter of his first marriage.
Text Copyright © of Telegraph Group Limited 2001