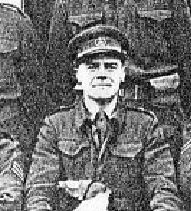 Many Dorset Auxiliers clearly remember Peter Weaver; serving first as training officer in charge of the West Dorset Scout Section and subsequently as Intelligence Officer for all Dorset, he was well known across the county.

Philip Humphrey Peter Weaver, known as Peter, was born on 12 Mar 1912 in Kalimpong West Bengal. His father, Humphrey Weaver, an Indian Army officer died in 1916 serving in Mesopotamia. Peter came back to England and was educated at Kings School, Bruton, apparently a degree of dyslexia causing problems with his entrance exams for several more prestigious schools.

After school he worked for Robinsons of Bristol, a paper manufacturer. He started his Army career in 1933, serving for a year in the ranks of the Tank Corps having being promised a place at Sandhurst at the end of this, but then was told he was a month too old to be eligible so bought himself out. After this he owned a sweet and tobacco shop in Bournemouth, then dry cleaning and (technically illegal) fruit machine businesses. He even spent some time as a boxing promoter.

He was an active sportsman, scoring more runs than any other English schoolboy, captaining the England hockey team in 1937 and playing first class cricket twice for Hampshire in 1938. He joined the Royal Engineers as a Territorial in 1937. He was called up in 1939 being commissioned into the Dorset Regiment from 162 OCTU in April 1941.

He was posted to the West Dorset Scout Section of Auxiliary units as its officer. His role, along with his section, who were all from the Dorset Regiment was to train the Home Guard Patrols. Lt Weaver became well known to many Patrols and was a familiar figure in the Purbecks. In August 1943, he took over as Intelligence Officer in charge of the all the Auxiliary Units in Dorset, from Major Darwell-Smith.

The Scout Sections were being wound up in late 1943, and this coincided with the SAS returning from its successes in North Africa and looking to expand ready for the invasion of Europe. Through the grapevine they became aware of the trained men being released by Aux Units, all with considerable knowledge of behind the lines operations. They were famously invited to the Curzon Cinema to hear about the SAS from its legendary second in command Paddy Mayne. Almost the whole West Dorset Scout Section signed up for the SAS and most took part in Operation Bulbasket, an infamous operation in France where after considerable initial success, the SAS men and the French Maquis they were working with came under heavy attack. Most of those who survived were captured and subsequently executed. Captain Peter Weaver escaped, along with former Norfolk Home Guard Auxilier John Fielding.

One of their number, former West Dorset Scout Section member George Biffin, was long officially thought to have died. He read of his own death in a carefully researched book about Operation Bulbasket and was able to surprise the author with his survival. This was due to a German Medical Orderly swapping his identity with another British soldier who died in the same Prison Hospital. This meant he escaped the planned execution, but was recorded as having died. He lived in Dorset until his death in 2007.

Peter Weaver ended the war with SAS in Europe and was of one of the unit who liberated Belsen Concentration Camp. After the war Peter Weaver served in Crete and for a while with the Sudan Defence Force. He spent time in Eritrea and Egypt with the Royal Berks Regiment and with the British Military Mission in Greece.

On leaving the Army he spent time as a chicken farmer in Essex, before moving to the Purbecks, where he enjoyed sailing in his retirement and is known to have paid a return visit to the Langton Matravers Patrol’s bunker.

Report provided by CART Researcher for Dorset, Dr. Will Ward.